When it comes to a simple yet flavourful ingredient in a meal, the Capicola is one of them. Many culinary experts utilize this thinly-sliced pork meat to make a full meal or enhance the flavor of a simple recipe.

It is native to the Italians, but its popularity has grown in other parts of the world because of its unique qualities. In the hands of a skilled chef, the addition of Capicola can transform a simple dinner into a fancy restaurant dinner.

The Capicola is no doubt a great ingredient, but it can also be replaced in situations when you don’t have any, and we will be looking at some of these replacements in this article. What Is a Capicola?

Capicola is meat from the muscle around the neck and shoulder of pork; this meat has been seasoned, dried, and cured. It is commonly sliced into thin pieces and is also referred to as coppa, capocollo, or gabagool.

Capicola originated in Italy, Piacenza in the north, and the Calabria region in the south of Italy. Capicola is one of the two most famous Italian salumi; the other is the prosciutto which is also thinly-sliced dry-cured pork meat made from the hind leg.

A slow-roasted version of the Capicola is referred to as the coppa cotta.

Use of Capicola in Recipes

Capicola is a famous meat slice, especially in Italian recipes; the famous thin appearance of the meat is useful in recipes like pizza, antipasto, sandwiches like muffulettas, subs, panini, and Italian grinders.

The process involved in preparing Capicola makes it house a mild fatty texture, smokey and rich blend of spice flavor that enhances the flavor of a recipe when paired with it.

Below are some delicious recipes that use the capicola meat cut, and they include:

Capicola has made a name for itself as a flavorful and delicious cured meat; whether it is prepared on its own or added to a recipe, Capicola can enhance the overall taste of a meal with its salty and spicy flavors.

However, Capicola may not always be available to you, and this reason can put your recipe on hold, but when you know one or two alternatives, you’ll be able to finish your cooking in no time. Some of these alternatives for Capicola include: Prosciutto is an uncooked Italian salt-cured ham; it is gotten from the pig’s hind leg and is usually served thinly sliced just like Capicola.

Prosciutto and Capicola look almost the same at first glance and house a few similarities, making them a potential substitute for the other.

Prosciutto can also be prepared and eaten on its own or added to recipes. Still, it carries a sweet, savory, and sharper taste compared to the mild salty, smoky, fatty, spicy taste of Capicola. Pancetta Ham is also native to the Italians; it is seasoned salt-cured pork meat gotten from the belly of a pig. It has a dry-cured, mild nutty flavor with a silky and light pink appearance.

The method used to prepare pancetta Ham is salt curing and air drying, which is similar to the same preparation method for Capicola.

The pancetta Ham is a common substitute for Capicola because it works well in capicola recipes. The ham is sliced thinly just like Capicola, but in the United States, it is available in cubes cuts.

When substituting, the same amount used for Capicola in recipes can be used for pancetta Ham. Bresaola is an Italian air-dry, salted beef that has been aged for two to three months to become a hard, dark red to purple colored beef with a sweet, nutty, and musty taste. Bresaola can also be made from horse, venison, and pork.

Bresaola originated in a valley in the Alps of northern Italy’s Lombardy region known as Valtellina. It is lean, but tender beef rubbed down with spices, dry cure, and thinly sliced.

The Bresaola has an overall mild taste that wouldn’t overwhelm your recipe, which is why many culinary experts in many recipes utilize it. It is a good alternative for people who dislike eating pork.

You can substitute Bresaola for Capicola in recipes using the same measurement. 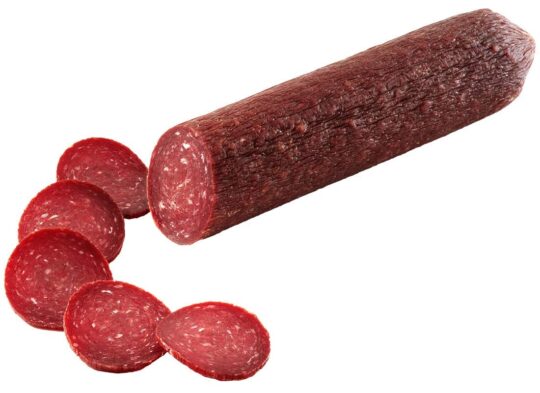 Salami is a fermented air-dried cured sausage commonly made from pork, but other versions from other meat still exist, like beef and venison.

Salami is a popular cured meat that was also popular in the past because it could last for more than a month when stored at room temperature. Salami is made by casting and seasoning the pork or beef, then hung to raise flavor and left to age.

Although the production method for salami and Capicola is different, salami can still be used as a substitute for Capicola.

How long would Capicola last?

Sliced Capicola would last for months when stored properly in a tight plastic wrap in a freezer and last for weeks in a refrigerator.

What is the difference between Capicola and prosciutto?

They both have a similar thinly sliced appearance but have different textures; Capicola has a more tender texture while prosciutto has a buttery texture.

Is salami pork or beef?

Salami can be made from either of the two, whether pork or beef.

Capicola is one of Italy’s delicious dry-cured meat, which is why it is used in several recipes. In the case of unavailability or preference, other similar dry-cured meats can be used in their place.

The ones discussed in this article would do a good job substituting Capicola in any recipe; why not try them out to see what works for you.