You’ve come to the right site if you’re curious about the flavour of Muenster cheese. This creamy, mild-flavoured cheese melts quickly and may be used in various recipes and snacks. It has an orange rind that makes it easy to spot, but the flavour is neither hot nor overbearing. Muenster is known for its mild flavour and silky texture, and it can produce a robust flavour and a pungent scent when aged correctly in some situations. Typically, this cheese is served as an appetizer.

If you’ve never eaten this creamy cheese before, it’s crucial to learn about the several varieties available in the United States. If you want to eat some excellent melted cheese, this is a great option. Muenster cheese is semi-soft and has a nutty, slightly sweet flavour. It’s a popular melted cheese option that goes with practically any cuisine. It goes well with sandwiches, salads, and pizza, and its flavour and texture make it a favourite ingredient in the kitchen.

What is Muenster Cheese?

The American equivalent of the famous French Munster cheese is Muenster. But it doesn’t have the same flavour. Muenster cheese is prepared from pasteurized cow’s milk and is semi-soft and buttery.

It has a smooth and soft feel that is similar to brie cheese. The cheese has an orange rind/outer skin and is pale yellow in hue. You may now inquire as to how the orange rind seems. Only a tiny amount of food colouring is used in the cheese-making process. For colour, some folks use mild paprika. The orange rind has no effect on the cheese’s flavour, and it’s only used to resemble the French Munster cheese. One of the most excellent melting cheeses available is Muenster.

Muenster cheese isn’t as strong as those other cheeses, and it has a pleasant flavour, and the flavor is similar to that of Monterrey Jack or young Gouda cheese. When properly aged, Muenster cheese, like most traditional cheeses, has a richer flavour and a pungent odour.

Protein, calcium, and vitamin B12 are abundant in Muenster cheese. However, you should not overlook the calories and fat content of the nutrients. Muenster cheese is also a good choice for persons with lactose sensitivity because it contains less lactose than other cheeses. The majority of people can comfortably digest this cheese.

Muenster is essentially a pretty mild cheese. This is primarily because this sort of cheese is typically served when it is still relatively young and thus does not have as much time to mature as other, more pungent cheeses. As a result, it will have a moderate flavour as long as this cheese is utilized soon after the aging process. Muenster has a salty kick to it, despite its mildness. Another reason this cheese is perfect for melting is because it appears to be already seasoned. It’s earthy and rich but not spicy at all. So don’t be thrown off by the orange rind of this cheese.

Muenster cheese comes in various flavours, as we’ve already established. Let’s take a closer look at what these are.

What is the Process for Making Muenster Cheese?

The production of American Muenster cheese is identical to that of Alsatian Munster, although several characteristics distinguish it.

Muenster is made from pasteurized cow’s milk cooked to around 90 degrees Fahrenheit to allow lactic acid and rennet enzymes to develop and thicken. Curd is sliced into small squares and cooked for a short time at 100°F to produce a shape before being drained by gentle pressure. During cooler temperatures, they begin to age due to high humidity. After that, saltwater and an orange-red colorant are added to the cheese. The aging process for little pieces takes about 2-3 weeks, whereas large cheeses might take up to 3 months.

What can Muenster Cheese be Used for?

A grilled cheese sandwich is one of the best ways to enjoy Muenster cheese. Muenster cheese pairs well with various foods, including potatoes, chicken, steak, fruits, mac & cheese, and much more. You can experiment with it on various meals and cuisines to create your own Muenster cheese recipes.

Muenster cheese’s mellow flavour is versatile and adaptable to a wide range of meals. Thus it can be found in a wide range of recipes. Muenster has a soft texture and melts quickly, ideal for appetizers and snacks such as grilled cheese sandwiches, quesadillas, pasta, and pizza.

It’s also ideal for meat meals like chicken and steak, so you may provide a spectacular dinner to your loved ones. In any case, their adaptability in the kitchen should not be limited. 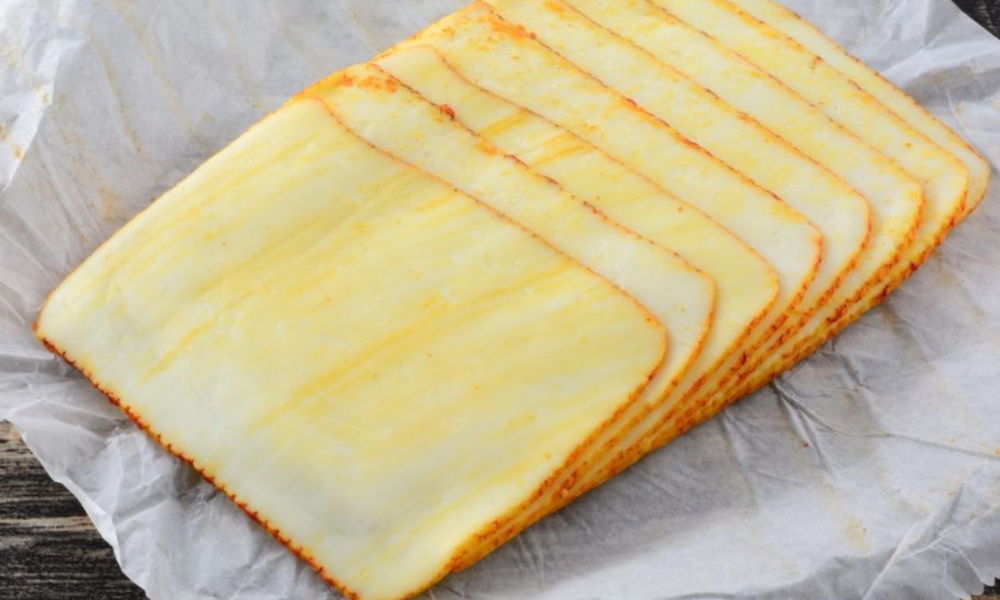 Is Muenster Cheese Similar to Mozzarella?

Muenster is a light, buttery cheese with a flavour similar to mild Monterrey Jack cheese. Whole milk is usually used to make the cheese. The distinction between mozzarella and Muenster as nouns is that mozzarella is a soft Italian cheese derived from cow’s or buffalo’s milk that is often used as a pizza topping and in salads. Muenster is a soft white cheese.

Is Muenster Cheese Good for your Health?

It is one of the healthiest cheeses available, with numerous nutrients and health advantages such as:

When kept chilled, some cheeses have a lengthy shelf life. Muenster cheese, unfortunately, is not one of them. This is because Muenster cheese is frequently marketed in sliced form, making it less durable than cheese sold in blocks.

If you buy Muenster cheese in sliced form, it will last about 3 weeks in the refrigerator. Some producers may advise using the cheese sooner than this, particularly if it has already been opened. So, if you want to keep your Muenster fresh for as long as possible, wait until you absolutely need to open it.

Block cheese, as previously indicated, has a longer shelf life. If your Muenster cheese comes in a block, anticipate it to last longer than three weeks.

Is Muenster a Stinky Cheese?

The aroma of this French cheese is so offensive that it has earned it the nickname “Monster Cheese.” It is traditionally made in the French region of Alsace, using unpasteurized cow’s milk, and then aged in cool, dark cellars for a year.

How can you Know if your Muenster is Bad?

Even though sliced Muenster cheese should last 3 weeks, it may spoil sooner. Especially if you’ve opened it and then forgotten about it. Muenster that has gone bad is simple to recognize because the slices begin to crack at the edges, and the cheese color darkens. If the cheese has deteriorated significantly, mold may begin to form on the slices.

If your Muenster is in slices and they’ve gone moldy, toss them out. If your Muenster is in a block and has just seen some surface mould, you can simply chop the mold away. The cheese further inside the block will, in most situations, be completely edible. Simply repackage the safe-to-eat cheese in a new container and consume it within a few days.

It doesn’t matter how delicious a Muenster cheese might be; in the end, everything boils down to personal taste and choice. On the other hand, Muenster cheese is a safe bet for everyone who likes cheese. Cheese is a dairy product that is consumed all over the world. If you’re vegan or trying to cut down on dairy but don’t want to give up cheese, there’s good news for you, too! Vegan Muenster cheeses are available.

Muenster is a semi-soft or soft cheese. It’s a great melting cheese because of its light paste and cleaned rind. It has a gentle buttery flavour with a hint of tartness. It goes best with a dry or semi-dry white wine. It goes well with fruit, particularly grapes and pears, and the fruit balances out the cheese’s sweetness. Muenster cheese has a velvety consistency, much like many of the most well-liked varieties of brie cheese that are currently available on the market. Muenster cheese is a versatile ingredient that may be used in various cuisines.