You might be curious about the flavor of star anise. It’s a seed pod found on magnolia trees in southern China and northeast Vietnam. It is frequently confused with anise. However, it is unrelated to the spice. It can be used in baking, cooking, and making tea. How does it taste, though? It has a sweet and bitter taste to it.

Star anise has a licorice-like flavor, making it popular in Asian cuisine. It’s a mild spice that goes well with a variety of foods. The pure Chinese variety is safe, and allergic responses have been reported infrequently. Japanese star anise, on the other hand, is extremely poisonous. This means that pure Chinese star anise should be avoided. You should get both ground and entire star sprigs.

What is Star Anise?

Star anise conjures licorice and fennel seed scents and flavors for many of us. What recipes we associate with star anise, on the other hand, are entirely dependent on what we enjoy cooking or what we grew up making. This spice has various applications, from savory recipes to liqueurs and desserts. So, what is star anise exactly, and how does it differ from anise seed?

The seed pod of the Illicium verum plant is used to make star anise. This plant is an evergreen shrub native to southwest China. Because of its form, star anise is called a star anise. Often, these little stars have eight points, each containing a seed. However, the seed isn’t the only thing that’s utilized. Both the pod and the seed have a market value. Chinese star anise is star anise grown in China, Indo-China, and Japan. The pod is harvested before it ripens and sun-dried to make star anise until it turns a characteristic brown color.

Star anise has a licorice flavor similar to anise and fennel, but it is not linked to either of these spices. Coriander, cinnamon, cardamom, and clove go nicely together. Star anise can be used whole or ground in cooking.

Star anise has a warm, sweet, and spicy scent and flavor. It smells like licorice, fennel seed, clove, and anise seed, which is a distinct seed we’ll discuss later. The star anise flavor comes from anethole, which is similarly found in anise seed, and this oil has a licorice flavor.

It has a herbal flavor and scent. Star anise is frequently combined with cinnamon, nutmeg, and ginger because of its herbal, licorice, sweet, spicy fragrance. It complements the brightness of citrus and adds a sweet warmth to savory meat preparations. It’s a fundamental component of Chinese five-spice powder, including star anise, cinnamon, powdered cloves, fennel seed, and Szechuan peppercorns.

Star anise is frequently confused with anise seed and with good cause. Both have a licorice-like flavor and scent and strikingly similar names. They’re not the same thing, though. Believe it or not, they’re not even from the same plant family.

While star anise is a member of the magnolia family (remember those evergreen trees? ), anise seed is a member of the parsley family, especially the Pimpinella Linum plant. Aniseed is smaller and resembles fennel seed than star anise – think little brownish-green teardrop forms. It’s a dessert and charcuterie ingredient native to Egypt, the Middle East, and Europe.

Because star anise oil is less expensive to make than anise seed, it’s used more frequently when goods are flavored with anise. Another distinction is that star anise is not the same as Japanese star anise, which comes from the Illicium anistatum plant. According to NC State, star anise is extremely hazardous and should only be burned as incense rather than consumed.

Star anise can assist in stimulating the removal of free radicals throughout the body, particularly those that might cause oxidative stress in the skin, thanks to its high amount of antioxidants. This can help keep your skin appearing young and bright by reducing the appearance of wrinkles, increasing skin suppleness, and concealing existing scars and blemishes.

Herbs and spices are often underappreciated in health and nutrition, and star anise is no exception.

Its vitamin and mineral composition is unknown; however, given the small amount of spice you may consume at any given moment, its nutritional value is likely to be minimal.

Nonetheless, it’s a significant source of several potent bioactive chemicals, all of which are essential for optimum health.

The star anise’s most important component may be its abundance of flavonoids and polyphenols. These are most likely to blame for the spice’s wide range of applications and medical advantages.

The following are some of the primary health-promoting chemicals present in star anise:

These chemicals may work together to give star anise its antioxidant, anti-inflammatory, and antibacterial benefits.

According to animal and test-tube research, this spice’s antioxidant capability may even have anti-cancer characteristics, such as lowering tumor size. Additional research is needed to further understand how star anise’s bioactive components may benefit human health.

For thousands of years, star anise has been utilized in traditional Chinese medicine, and it has recently been adopted into some Western therapeutic procedures. Its antibacterial capabilities and pharmacological potential have contributed significantly to its appeal.

Improving the immune system is one of the most significant health advantages, and Star anise’s antimicrobial properties have been carefully studied and documented. This spice has been used to cure stomach and other body-part bacterial illnesses for generations. Most importantly, this spice looks to be effective against various antibiotic-resistant bacterial strains, making it extremely valuable to the pharmaceutical business.

Anecdotal evidence suggests that star anise is a good digestive, and the fruits are regularly consumed after meals to aid digestion. It can also assist with bloating and flatulence and cramping and strengthening your gut’s bacterial balance for better nutrient absorption.

This spice, in particular, has potent antifungal qualities. Many fungal infections, such as Athlete’s foot, ringworm, Candida, and other prevalent strains, have been treated with it. When it comes to the benefits of star anise tea, a regular dose can offer your immune system the boost it needs to fight harmful diseases.

Iron is the most prominent mineral in star anise, and a single tablespoon of these little fruiting bodies contains around 13% of your necessary daily intake. While it’s unlikely you’ll eat a whole tablespoon of these fruits, the iron content can still improve red blood cell synthesis, enhancing energy levels by improving circulation and oxygenation in the body’s extremities. 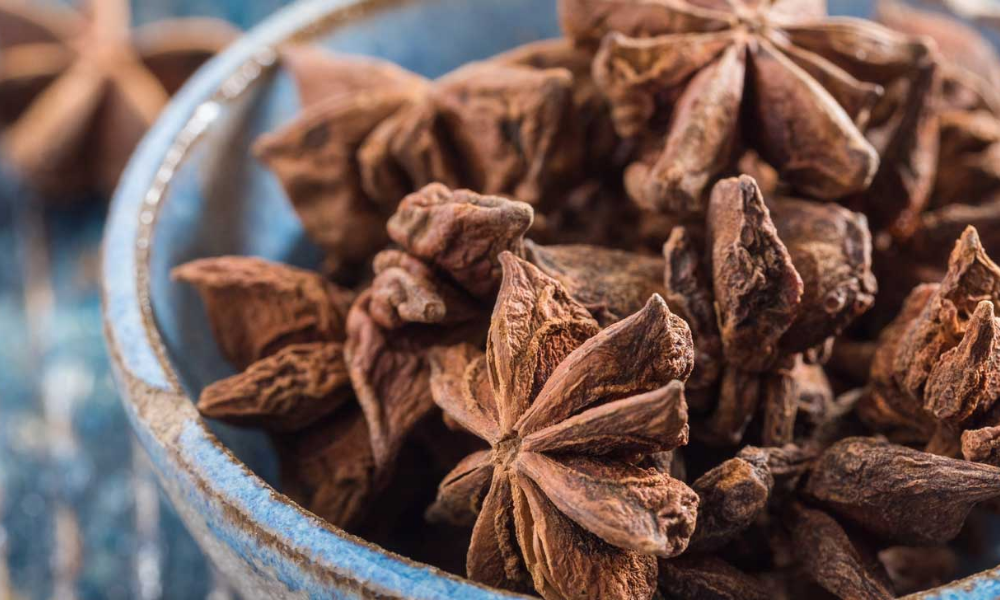 What is the Flavor of Star Anise in a Dish?

Even though it has a sweet flavor, star anise is traditionally used in savory recipes, especially meat. It is frequently used in its entirety in soups, stews, and braising broths, where it imparts a flavor reminiscent of licorice and pepper.

What is the Best Way to Cook Using Star Anise?

From Chinese cuisine to Vietnamese pho, spiced chai, biscuits, jams, liqueurs, sauces, and soups, star anise is utilized in various dishes. Typically, you’ll use the powder form, which should be fresh-ground if you can locate the pods. However, you may use whole pods in broths and meat marinades during the actual cooking time, and the star anise will lend its flavor and perfume. Just keep in mind to remove the pods before serving and eating.

Star anise’s harmony with citrus makes for superb vinaigrettes and whole pods for braising meat or powdered powder in sauces. On the dessert front, star anise adds a delightful layer of complexity to gingerbread, apple pie, spice cake, and other desserts, such as carrot cake.

When using star anise, keep two things in mind: use it sparingly and don’t cook the full pods for too long. This spice has the potential to overwhelm all other flavors in a meal.

What are Some of the Dishes that Use Star Anise?

The aromatic qualities of star anise are particularly well-suited to noodle soups, such as the traditional Vietnamese Pho, Lanzhou Beef Noodle Soup, and Taiwanese Beef Noodle Soup. Even the flavor of the renowned Chinese snack known as marbled tea eggs is derived from this ingredient. However, due to the potency of its perfume, it is easy for it to completely dominate a dish and make only sporadic use of it.

Where can I get Star Anise, and How do I get it?

Star anise is available in whole pods or as a powder. Ground star anise is quicker and easier to use, but its flavor and perfume may fade faster. To get the most bang for your buck, acquire whole pods and grind them yourself (pods and seeds combined) shortly before using them in a recipe. The other slightly more difficult aspect of this is that ground star anise can usually be found in the spice aisle of any supermarket. However, full pods will almost certainly require a trip to a specialist store.

If you can’t obtain star anise, try anise seed, fennel seed, or Chinese five-spice powder as a substitute. Keep your star anise fresh and potent by storing it in an airtight container and keeping it away from moisture, heat, and sunlight. This is true for both whole pods and powdered powders. The full pods will last a year or more, compared to six months for the ground version.

After harvest, the Star Anise seed pod is dried. It contains licorice seeds, which give meals a licorice flavor. It gets its name from its eight points. Star anise’s seed has a licorice-like flavor. It’s commonly used in Asian cooking since it gives meats a warming impact. Tea contains the seeds as well. What is the flavor of star anise?

The flavor of star anise is warm, sweet, and spicy. It has a clove, licorice, and fennel seed aroma to it. It’s also good with duck and pork, and it’s a great addition to drinks and sweets. Star anise is used to flavor rice, noodles, and even rice in Chinese cooking. Its spicy, toasty flavor goes nicely with various dishes, including duck.