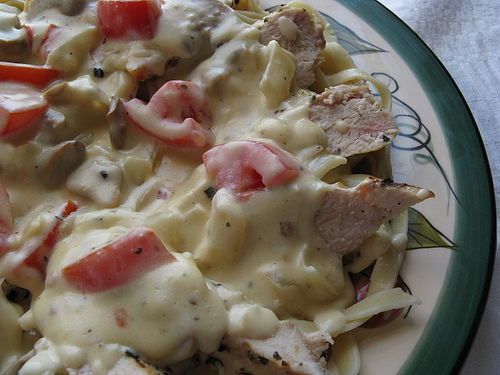 Chances are you’ve probably have eaten chicken fettuccini alfredo at some of your favorite restaurants such as the olive garden, and tonight I have a chicken alfredo recipe for you that rivals restaurants. That’s right; this is some of the best homemade chicken alfredo that iv ever tasted. This dish is based off the original called fettuccini alfredo, which is basically fettuccini noodles topped with a deliciously creamy cheese sauce. We are adding chicken and going even further by putting sliced mushrooms, Roma tomatoes, and onions in the mix. The original recipe calls for cooking the chicken in the frying pan, but sometimes I feel like something different so I’ll grill it instead.  This recipe might seem like it takes a little work, but it’s really easy and the end result is worth it. This recipe is sure to impress almost anyone. Cook it for some guests and see for yourself. 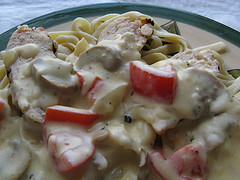 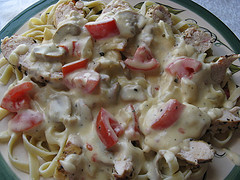 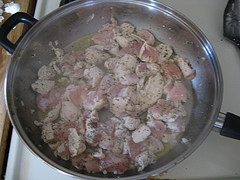 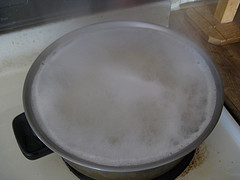 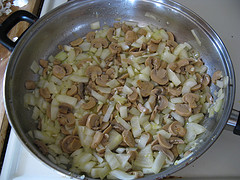 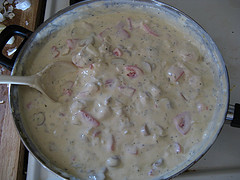 This recipe is delicious. It makes a lot but I just froze half of it for a quick meal later. My family loved it. Thanks!

I love this recipe, i've made it quite a few times and just dont want to try any other alfredo recipe again ..i keep going back to this and me and my husband love it! Thanks for sharing! P.S. Please put down the serving size for your recipes, it'll really help..im a new cook and id really appreciate that :)

Stephanie Chesley- if the sauce was too thick, next time thin it out using some milk.

This was very good but my sauce was very thick. I used mild cheddar cheese. Any suggestions?

This recipe was so amazing! I will no longer buy jar alfredo sauce. I didn't have half & half so I used heavy cream. My kids loved it! Thank you. I will definitely memorize this one! I look forward to trying more recipes!