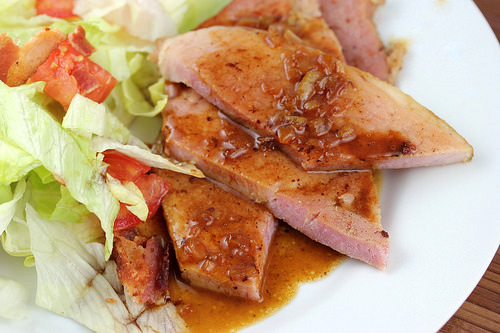 This ham steak with red-eye gravy is yet another quick and easy dinner to prepare. The ham steak is cooked in the pan until browned and then the gravy is prepared. The gravy has a great taste and gets a lot of flavor from ingredients such as maple syrup and instant espresso. The gravy uses the grease from the cooked bacon but the bacon itself is not actually used in the recipe. You could serve the bacon strips on the side, or I used them in a lettuce salad as a side dish. This recipe also goes great served with some sort of a casserole as a side dish. Enjoy.