Empanadas are miniature versions of traditional Spanish meat pies wrapped in bread. While the fillings, sizes, and cooking methods vary by country in Latin America, they all begin with savoury ingredients stuffed into pastry dough and baked or fried to flaky, golden-brown perfection. This beef empanada recipe is quite similar to Argentinian empanadas because they are baked rather than fried and utilize ground beef instead of shredded or cubed beef. 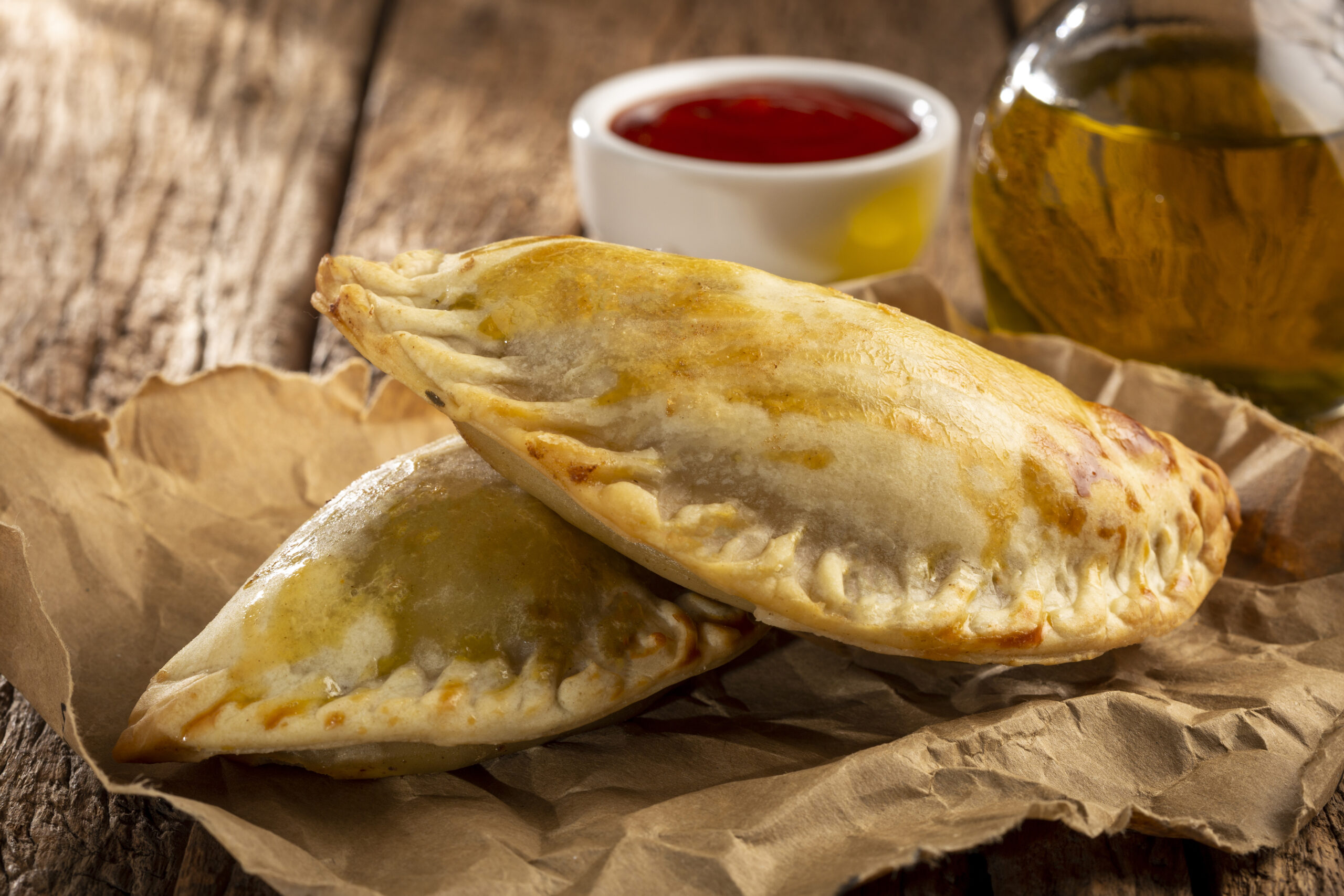 Although empanadas originated in northwest Spain, numerous Latin American countries have their own versions. Empanadas can be filled with various ingredients, such as beef, chicken, beans, cheese, and even pizza toppings. Sweet empanadas are filled with fruit pie filling or chocolate in some places. After you’ve produced the dough, you can select whether to make the filling classic or innovative.

Empanadas are pastry turnovers made with baked or fried pastry dough and filled with whatever meat or filling you choose.

What are the Ingredients in Empanadas?

Empanada fillings vary greatly from nation to country; for example, in Puerto Rico, an empanada might be filled with sofrito-laced ground beef. In Mexico, an empanada might be filled with shredded chicken and corn. However, there are a few commonalities among all of this diversity. Empanadas are little dough pockets comprised of the following ingredients:

On the outside, a simple, handmade dough.

A protein (typically pig, chicken, or beef, but occasionally fish or cheese) is stuffed inside.

Empanadas usually include one or two simple vegetables, such as maize, chopped potatoes, or carrots.

Finally, they’re generally spiced with warm spices (such as cumin or even cinnamon) and/or chilli peppers.

This dish goes well with Potato, Pepper, and Chorizo Empanadas. However, once you’ve mastered a basic empanada dough, there’s no reason you can’t use it to make any kind of empanada you want, like this Chicken Empanada with Chorizo, Raisins, and Olives or a Spiced Turkey Empanada—or even the surf-and-turf stuffing in these Tuna Empanadas with Serrano ham. You could also just stuff the delicious bread with whatever meat and veggie combinations you like or have on hand. These filling options will be elevated if you use handmade dough instead of store-bought pizza dough or puff pastry.

Sift the flour and salt into a large mixing bowl, then cut in the butter with your hands or a pastry blender until the mixture resembles a coarse meal with some (about pea-size) butter chunks.

Whisk together the egg, water, and vinegar using a fork in a small bowl. Add to the flour mixture and toss with a fork until barely combined. (The mixture will appear shaggy.)

Place the dough on a lightly floured area and collect it together, then knead gently with the heel of your palm once or twice to bring it together. Form dough into a flat rectangle and chill for at least 1 hour, wrapped in plastic wrap.

Where do Empanadas Come from?

Empanadas (Spanish for “wrapped in bread”) are little replicas of typical Spanish meat pies. While the fillings, sizes, and cooking methods differ from nation to country in Latin America, they all begin by stuffing pastry dough with savoury ingredients and baking or frying them to flaky, golden-brown perfection. Because they are baked rather than fried and use ground beef instead of shredded or cubed, this beef empanada recipe is closely similar to Argentinian empanadas.

What Vegan Empanada Options are there?

Vegan empanadas can be made by replacing the butter in the featured recipe with vegetable, peanut, or olive oil.

You can use veggie stock instead of chicken or beef stock in the fillings.

Tofu or a vegetable protein can be used in place of meat, or the empanadas can be filled with seasoned vegetables. One tablespoon of flax mixed with three teaspoons of warm water can be used to replace eggs in the filling recipe.

The dough for empanadas is similar to other baked foods, but it is distinguished by its delicate and crisp texture.

Empanada dough is sometimes substituted with pie crusts, but most recipes result in crumbly crusts.

A good crumble is wonderful for pies, but it’s not a desirable feature for a pastry created as a quick lunch while travelling.

How to Make the Best Dough for Empanada Dough?

Do you have any more questions about producing the greatest empanada dough? Here are some suggestions:

Use the Dough Right Away: If you leave the dough out without covering it with a towel, it will dry out and crack. It’s better to use the dough right away after making it.

Refrigerate the dough for 30 minutes if you can’t use it right away. You may want to do this anyway to make the dough even flakier.

Brush a little egg wash (1 beaten egg + 2 tablespoons water) on the tops of the empanadas before baking to obtain glossy, golden empanadas.

To Avoid Soggy Empanadas, remove the empanadas from the pan as soon as they are done baking to avoid any filling spilling out during the baking process.

How do you Join the Empanada Edges?

So, how should the dough be folded? There are a few possibilities. You may make empanadas with your hands, a fork, or even an empanada press.

I frequently utilize the fork method because it is convenient for me. This is how the whole thing works:

Preheat the oven to 375 degrees Fahrenheit when you’re ready to fill and bake the empanadas.

Bake the Empanadas: Bake the empanadas until light and golden on top, about 25-27 minutes. Allow 10 minutes for cooling before serving.

What are the Freezing Instructions for Empanada Dough?

Follow the recipe’s instructions to the letter. Allow the empanadas to cool completely after removing them from the oven.

To keep the empanadas from sticking together, flash freezes them on a rimmed baking tray in the freezer. Fill a freezer-safe container or zip-top bag halfway with empanadas.

Place frozen empanadas in a preheated 350°F oven and bake for 20-25 minutes to warm.

Empanadas can be stored in the freezer for up to three months.

To Make Beef Hand Pies, What Kind of Dough Should I Use?

Homemade Empanada Dough: Empanada dough is smoothed out and cut by hand into small, 4-inch circles, similar to pie dough. Layla offers a terrific Empanada Dough recipe if you prefer to prepare your own dough.

Pre-Rolled Pie Crust: Pre-rolled pie crusts are available in the refrigerated department. This dough will be sweeter than standard empanada dough and can be thinner.

Press and roll thin canned biscuits or crescent rolls for a flakier quicker empanada. These aren’t as good as conventional empanada dough, but they’ll do in a hurry.

What can I do if my Empanada Dough Disc is Torn?

With one hand holding the disc, softly wet the other’s finger and trace the tear with water.

Is it Possible to Make Empanadas Ahead of Time?

Cover the tray of unbaked empanadas and refrigerate for up to two days to make these potato and meat empanadas ahead of time. Bake them at 400° for 40 minutes until ready to eat. They’ll come out of the oven absolutely brown and steaming, just like they did before.

You require more time. These handmade beef empanadas freeze beautifully! Once you’ve finished filling the dough and assembling the empanadas, place them on a baking sheet as if you were going to bake them, but instead of putting the sheet in the oven, place it in the freezer. Freeze overnight, then transfer to an airtight freezer bag with a zipper closure and keep for three months. When you’re ready to consume the empanadas, simply place them on a parchment-lined baking sheet and bake at 400°F for 45 minutes.

What is the Best Way to Roll Empanada Dough?

Rolling out the empanada dough can be done in a variety of ways. First, spread the dough out to an 18″ thickness with a rolling pin, then cut it into 4″-5″ rounds with a biscuit or pastry cutter.

Another method is to take a small bit of dough, about the size of a walnut or smaller, and flatten each chunk into a thin circular disc with a rolling pin.

However, using a tortilla press is the most convenient method. Place a chunk of dough (approximately.75 ounces) on a tortilla press fitted with plastic wrap. Using the tortilla press’s arm, press the round ball into a flawlessly smooth and round disc of empanada dough.

Is it Better to Bake or Fry Empanadas?

Whether baked or fried, empanadas are excellent. If you fry the dough instead of baking it, it will have a distinct flavour and texture.

Personally, I prefer the taste of fried empanadas. The dough for empanadas expands up and becomes light, crispy, and flaky. Absolutely fantastic!

Baked empanadas, on the other hand, are delicious and healthier. If you bake the empanadas, the dough will be thin and crunchy rather than light and airy.

Brush them with an egg wash to get a gorgeous golden hue on baked empanadas.

When you Fried Empanadas, What Kind of Oil do you Use?

Before adding the empanadas to the pan, the oil should be heated to 350-375 degrees F. This temperature enables even frying and prevents the empanadas from becoming too oily, which occurs when food is fried in oil that has not reached the proper temperature.

Empanadas should be fried for 1 minute on each side or until golden brown, then drained on paper towels before serving.

What Temperature Should Empanadas be Baked at?

Place the empanada on a baking sheet lined with parchment paper. Using a fork, poke a few holes in the tops of the empanadas, which allows the steam to escape while also preventing the empanadas from exploding.

After that, brush the empanadas with an egg wash. Bake for 25 to 30 minutes on the centre rack of a preheated 350°F oven or until golden brown.

What’s the Difference Between Empanadas and Pastelillos, Exactly?

Pastelillos are little turnovers fashioned from a crimped thin dough at the edges and fried, similar to pasta dough.

Empanadillas are a huge turnover with rolled edges and a thicker dough. The dough is comparable to pie dough in texture.

Have you tried masa empanadas before? Empanadas are half-moon-shaped pastries from Spain filled with seasoned ground beef, chicken, cheese, potatoes, and a variety of other ingredients.

You’re probably familiar with savoury empanada recipes, but did you realize that sweet empanadas exist? Various fillings are available for dessert empanadas, and McDonald’s apple pies on a stick remind me of these cinnamon empanadas. We can’t be friends if you don’t like those.