Even though its presence in the freezer aisle is still relatively new, practically every grocery shop now carries at least one vegan ice cream flavour.

While it may appear like a slew of new options have appeared suddenly, vegan ice cream has a long and interesting history – here’s the lowdown on its origins, present market, and ingredients.

Vegan Ice Cream: What is it?

Vegan ice cream is a frozen dish that does not contain dairy or animal products, such as eggs or cow’s milk. Vegan ice cream recipes frequently use coconut milk, coconut oil (refined coconut oil has less coconut taste), or blended nuts to obtain a creamy texture. You may also make the recipe nut-free, gluten-free, or sugar-free by changing the ingredients.

An Overview of Vegan Ice Cream

Almeda Lambert, a Seventh-day Adventist from Battle Creek, Michigan, published “Guide for Nut Cookery” in 1899, a vegetarian cookbook. Nut-based sausages, nut kinds of butter, dairy-free cheese, and ice cream made with peanuts, almonds, pine nuts, and hickory were among the recipes. Two of her three bases involve eggs, but the third is completely vegan – here’s how to make Ice Cream No. 2:

“Take 1 quart of creamy almond or peanut nut cream. If made with peanuts, the nuts should be roasted to a yellow hue rather than a dark brown. 1 cup granulated sugar and 2 teaspoons vanilla extract Cook for 20 to 30 minutes in a double boiler with the cream. Before cooking, add the sugar, then cook and add.

According to the Soy Info Center, in his 1918 article “Soy Beans As Human Food,” Arao Itano, a professor at the University of Massachusetts, was the first to think about soy-based ice cream. Lee Len They, an Indiana native, filed the first patent for soy ice cream in 1922, titled “Frozen confection and process of manufacturing same.” Seventh-day Adventist Jethro Kloss invented the first soy ice cream in 1930, a honey-sweetened delight available in chocolate, strawberry, and vanilla flavours.

What are the Ingredients in Vegan Ice Cream?

Because almond milk is still the most popular dairy-free option, it’s no surprise that so many businesses have decided to work with it. Because almonds have a neutral flavour and a similar mouthfeel to dairy-based ice cream, iconic Vermont-based firm Ben & Jerry’s creates its dairy-free ice cream from them. Vegan almond milk ice cream is available from So Delicious, Swedish Glace, and Almond Dream. Archer Farms, Target’s private label brand, also makes almond milk ice cream. Almond milk is used in the low-calorie company Enlightened’s non-dairy pints and bars. Breyers, a well-known dairy company, used almond milk as the backbone of its tastes.

Soy-based ice cream was not only popular in the 1980s. Tofutti, a vintage brand, and So Delicious’ (neé Soy Delicious) dairy-free soy delicacies are available today. Soy Dream, Swedish Glace, vegan Cornetto, and various Trader Joe’s vegan ice cream flavours are among the other alternatives.

So Delicious is the only large vegan ice cream company that uses cashews as a basis. However, artisanal firm Van Leeuwen uses a combination of cashews, coconut cream, and cocoa butter to create its delectable dairy-free base, which is sold in select places across the US.

Oat-based ice cream is making its way onto store shelves after a storm taking the dairy-free milk world. Oatly, the oat milk pioneer, has been selling vegan ice cream in Europe for a while and is getting ready to launch in the United States. So Delicious debuted three flavours of “Oatmilk” ice cream earlier this year. Elmhurst, a dairy processor turned vegan, joined a century-old ice cream business to develop “Oats Cream.”

Pea protein is the new vegan meat sweetheart, and it’s even making its way into ice cream. According to the company, both Ben & Jerry’s and Halo Top use soy protein in their vegan ice creams, and Magnum’s vegan ice cream bars are made with pea protein and coconut oil. Pea protein is also used to generate a creamy texture by McConnell’s, a 70-year-old dairy company.

Avocado ice cream was previously a staple of dairy-free desserts created at home. Last summer, however, the avocado-based Cado brand debuted at Whole Foods Market, demonstrating the full diversity of vegan ice cream. According to the firm, it contains less sugar than other products and is high in “healthy” fat from avocados.

Vegan ice cream can be made in various ways, and SorBabes, a dairy-free firm, makes sorbet. Still, co-founders Nicole Cardone and Deborah Gorman follow the “Guide for Nut Cookery” by creating rich, creamy sweets with nut butter such as pistachio, peanuts, almond, and hazelnut.

What are Important Tips for Making Ice Cream?

Make sure the freezer base of your ice cream maker is ready! It may be tempting to cut corners here, but getting the mixture cold enough to transform into ice cream is essential. My base is always ready because I keep it in the freezer.

It’s critical to use full-fat coconut milk in this recipe. Avoid using lite. Remember that we’re using the entire can of coconut milk. Also, coconut milk powder should not be substituted. It isn’t creamy enough, and the ice cream will be frosty.

Allow enough time for the ice cream base (the actual recipe) to chill. After 10 minutes in the freezer, I made it a couple of hours in the fridge and a whole night in the fridge. The latter two were considerably creamier, set faster in the ice cream maker, and scooped much easier. I strongly advise freezing the cashew cream for the appropriate amount of time.

If you live in a hot climate like I do, do this in the coolest section of your house or turn on your air conditioner if you have one. This enables the correct solidification of the mixture.

If you don’t cover your finished ice cream according to the instructions, ice particles will build in it and cause it to melt.

What are Three Different Forms of Vegan Ice Cream?

Vegan ice cream can be served in a serving bowl with various toppings or used as a filling in ice cream sandwiches and pies. There are a lot of options, so here’s where to start:

How to Make Vegan Ice Cream at Home?

In a food processor or high-powered blender, combine all ingredients and purée the ice cream mixture until smooth.

Add the ice cream base to an ice cream machine and churn the mixture until it reaches the consistency of soft serve, around 25–30 minutes, according to the manufacturer’s specifications.

Cover the mixture and place it in a freezer-safe container. Before serving, return the ice cream to the freezer for another 4 hours. 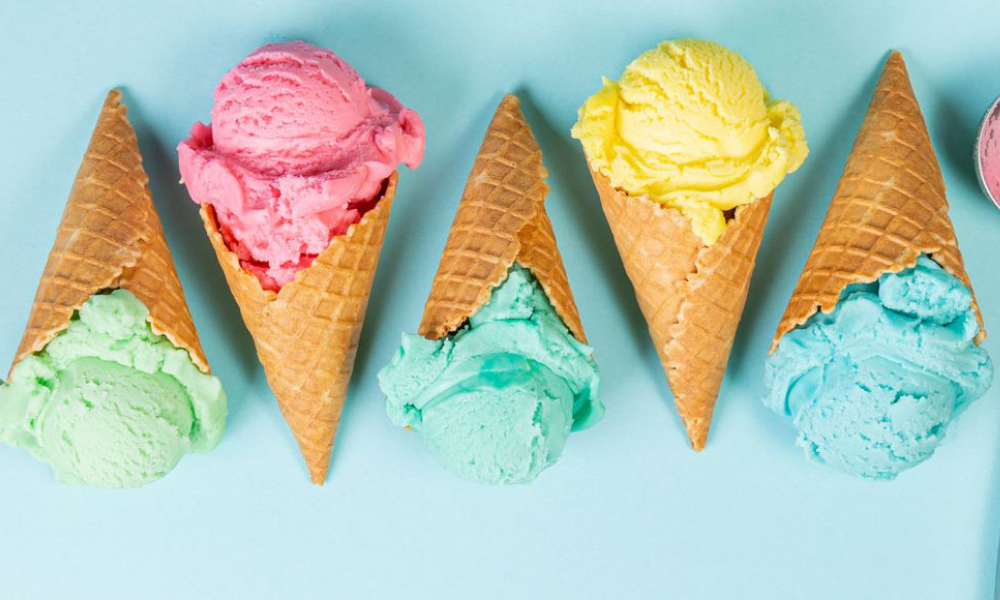 Does Vegan Ice Cream have a Coconut Flavor?

Yes, this ice cream tastes like coconut because it’s almost entirely comprised of coconut milk. I enjoy it simply, but coconut is an excellent flavour base for various flavours, from the nuts and fruit swirls Megan added to mint or basil, dark chocolate, and tropical flavours. Use this recipe as a starting point for your own additions!

If you don’t like coconut flavour, try Sara Kate’s 3-Ingredient Ice Cream. She makes a fruit-forward creamy sorbet with a smaller proportion of coconut milk and a large amount of fruit juice.

What are Some Popular Brands of Vegan Ice Cream?

Soy, almond, cashew, coconut, or rice milk are used in commercially produced products. Without killing a single cow, these products provide all of the delightful flavour and creaminess of ice cream. Vegan ice cream is available at almost every grocery. A decent natural foods store will have a wide variety of pint-sized containers, ice cream sandwiches, drumsticks, fudge bars, and other items.

A vegan ice cream sundae can be made using any of these brands. Simply purchase vegan whipped cream and chocolate sauce, a banana, and a container of maraschino cherries.

Is Vegan Ice Cream Good for you?

In an email to LIVEKINDLY, Susan Levin, director of nutrition education at PCRM (Physicians Committee for Responsible Medicine), said, “Undoubtedly.” “Dairy contains intrinsically harmful components and is not present in plant-based goods, and any product with a lot of total and saturated fat should be avoided. And, of course, added sugar has no nutritional value.”

Is this to say that vegan ice cream is forbidden? Absolutely not. “Look for the ones with the least fat and extra sugars. According to Levin, it’s healthier than dairy but not a portion of healthy food.

It also depends on the flavour of ice cream you choose. Is it a pint of Ben & Jerry’s vegan ice cream with a low overrun (ice cream business jargon for how much air is put into the mix) or something lighter like NadaMoo! with a low sugar content? (a pint of its Dutch Chocolate contains only 8 grammes of sugar). Low-calorie choices are also becoming more common, with labels like So Delicious, Halo Top, and Enlightened.

“‘Vegan’ simply implies that whatever product it is is manufactured from plants and does not contain any animal products,” Julie explains.

Coconut milk, almond milk, or soy milk are used in most vegan ice creams. None of the bases are derived from animals, and none are derived from plants. If, on the other hand, ice cream is produced with coconut milk but nevertheless contains egg, it is dairy-free but not vegan.