They’re probably not what you expected! Crickets taste mild, earthy, and nutty. We can use them to complement the flavor profile of a meal or as a stand-alone dish, and some have even described the flavor as slightly malty. 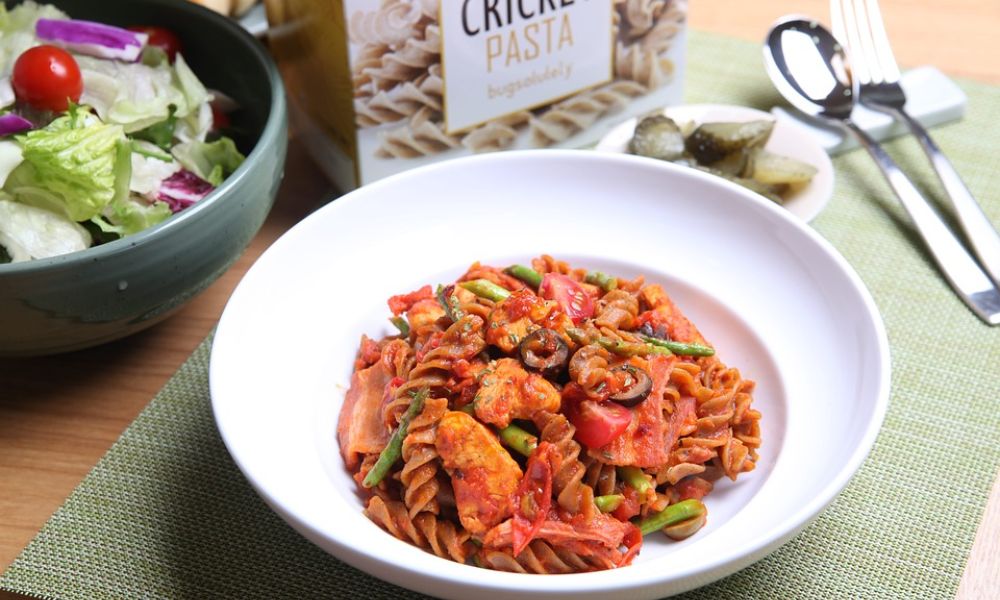 Crickets have been dubbed the “gateway bug” because they are suitable for those who want to try insects for the first time. If you’re new to crickets, cricket powder is a simple way to start incorporating them into your diet. Add cricket powder to your morning smoothie or pack a cricket powder energy bar as a snack in your backpack.

Cricket powder complements other natural, earthy ingredients well. Consider adding some cricket powder to your next batch of banana bread or waffles for an extra protein boost. Cricket powder has a very subtle flavor but is high in nutrients.

Crickets are insects related to grasshoppers, and scientists have identified and described over 900 cricket species. The Gryllidae cricket family’s global distribution extends from northern Alaska to the southern tip of South America.

Crickets are considered a good luck symbol in many cultures and are frequently depicted in folklore and literature. The most well-known fictional cricketer is probably Jiminy Cricket, a character in Walt Disney’s “Pinocchio.”

Crickets are prey for various animals, including birds and bears, and they play an important role in the food chain. Crickets are a favorite feeder food for many pets, including lizards and spiders. Humans eat crickets as well! Deep-fried crickets are a popular snack in Southeast Asia.

Crickets have a distinct nutty, slightly smoky flavor with a slight astringency on the back of the palate, and it has a pleasant umami flavor that deepens with roasting.

Aside from that, crickets are delicious!

Though some people claim that crickets taste like chicken, I suspect that the generally neutral flavor of chicken (especially breast meat) leads people to describe any other unidentifiable neutral flavor in the same way.

So, What Now? Eat More Crickets?

Many of us are constantly looking for the Holy Grail of “quick, easy, and good for me” in our daily quest to balance a hectic, always-on-the-go world with a socially responsible and healthy lifestyle.

While a seemingly endless parade of supplements and shakes awaits us on the groaning shelves of local nutrition and grocery stores, chances are you – and most people – are overlooking the cricket, an all-natural, protein-packed snack available in a variety of ready-to-eat and tremendously tasty offerings.

While cable-network “survival reality” shows and gross-out game shows go out of their way to emphasize how “bizarre” it is to consume insects and only in the most desperate situations, the truth is that television’s “reality” is (as usual) far from reality.

But why would anyone eat crickets for any other reason? Few people realize that entomophagy (the practice of eating insects), particularly crickets, has not only been a clean, healthy, and amazingly renewable source of protein for many, many cultures, including our pre-Columbian societies, but it is also a delicious, celebrated, and much-loved nutrition-packed snack food in many parts of the world today.

How do Crickets Appear?

Most people mistake a cricket for its cousin, the grasshopper. Crickets have cylindrical bodies, rounded heads, long antennae, and long thighs on their hind legs. Most crickets in the United States are black or brown, with a few exceptions being green.

The bull cricket family is home to the world’s largest crickets, which can grow to be two inches long.

What are the Environmental Consequences of Raising Crickets for Food?

Crickets, which reach adulthood in less than six weeks, require 1/12th of feed and 1/200th of water (not including fodder crop watering requirements) to produce the same weight of edible protein as cows, with a nearly zero carbon footprint.

Cricket dishes are easily influenced by the ingredients and spices used in their preparation, adding a meaty undertone to our favorite flavor combinations.

Crickets have a flavor similar to roasted or fried ants but without a slightly bitter/burnt aftertaste. Like all animals (and plants), insects vary in flavor, but there are many similarities between phylum, class, and order.

True crickets share the same general “nutty and roasted” characteristics as their cousins, the bush cricket, katydids, locusts, and grasshoppers (all of the order orthoptera – meaning straight wings’). In contrast, other species such as arachnids are often described as tasting like crab or shellfish.

Should you Eat Raw or Roasted Crickets?

While commercially farmed crickets are perfectly safe to eat raw, wild crickets can be unpleasant and even parasitic, depending on their food sources. Its part of the reason crickets are still so expensive – a lot of effort is put into producing exceptionally high-quality crickets.

Many cultures worldwide have included this virtually limitless protein source in their diets for unknown millennia. Roasted crickets are generally preferred, as roasting is thought to improve the flavor and texture of most insects, including crickets.

The Book of Matthew mentions the Biblical John the Baptist: “Now John himself wore clothing made of camel’s hair, with a leather belt around his waist.” His diet consisted of locusts and wild honey.” There is no mention of whether he cooked them first or not.

What Other Forms do Edible Crickets Take?

“There’s been a lot of buzzes lately about eating our six-legged friends, partly because they’re high in iron, protein, B12, and other nutrients.” According to the New York Times, “research shows that crickets provide nearly as much calcium as milk.”

There are numerous cricket food products available, as well as numerous ways to incorporate cricket protein into our regular diets. Among the most popular methods are:

So, the next time you’re looking for a quick, healthy, nutrition-packed snack to get you through the day, think about the mighty cricket before popping a pill or shaking a shake!

Crickets are quickly becoming a healthy, inexpensive, and long-lasting snack. Try some crickets if you’re looking for a complete protein that won’t upset your stomach or break the bank! Crickets are 20% protein and 13% fiber and contain more iron than beef. Africans have been eating crickets for thousands of years, but now Westerners are joining in on the fun. Crickets are incredibly healthy and make an excellent pre-or post-workout snack.

Can you Eat Live Crickets?

Wild crickets should not be eaten alive because they may carry diseases and harmful bacteria. It is, however, permissible to consume commercially farmed live crickets. To be safe and make them tastier, we recommend eating them cooked!

If you’re daring, you can eat live crickets as long as they come from a commercial farm that adheres to strict standards. Eating raw wild crickets is risky because you don’t know what kind of bacteria they carry. Crickets taste much better when cooked, so while eating them raw may seem cool, your taste buds will thank you if you cook them!

Is it Possible to Get Sick from Eating Crickets?

It is unlikely that eating crickets will make you sick, and crickets have long been consumed safely and are even mentioned in the Bible. Ensure you get your crickets from a reputable source, and don’t forget to cook them!

Crickets are safe to eat and popular in many African and Asian countries, including Nigeria, Thailand, Cambodia, and the Democratic Republic of the Congo. We recommend eating fried crickets to ensure their safety. Fried crickets are not only safe and tasty but also high in protein, with 20 grams per 100 grams.

Fried crickets have the salty, crunchy texture of chips, and crickets have a smoky, nutty flavor that reminds me of shrimp-flavored roasted chips. When crickets are fried, they taste like super-crispy chips, but they are high in protein instead of carbs.

Crickets fried in oil taste like chips! Fried crickets have a flavor similar to crunchy, salty, and crispy chips. They also have a smoky flavor that is similar to BBQ chips, as well as a subtle shrimp flavor. Because they are high in protein and low in carbohydrates, fried crickets are a much healthier snack than traditional potato chips.

Crickets have a flavor similar to almonds and popcorn, and crickets have a smoky, salty flavor with shrimp and nutty undertones. Consider shrimp-flavored popcorn with nutty almond and smoky twist.

Crickets taste like popcorn! Crickets, like popcorn, are crunchy and salty. Other flavors include a pronounced nuttiness similar to almonds, a smoky BBQ flavor, a soy sauce taste, and shrimp notes. If you’re looking for a more flavorful popcorn alternative, try crickets!

Do Crickets have a Shrimp Flavor?

Crickets taste like smoky, salty shrimp! Crickets have a flavor similar to shrimp dipped in hoisin or soy sauce, and they also have a nutty flavor similar to that of almonds. Crickets will also make you think of popcorn or chips.

Crickets have a strong shrimp flavor! Crickets have a smooth, nutty, salty, and smoky flavor that complements the shrimp perfectly. This combination of flavors results in a delicious crunchy snack full of satisfying umami flavors.

Do Crickets have a Chicken Flavor?

Crickets do not have a chicken flavor but a fairly neutral flavor, which is why they are often compared to chicken. Crickets, on the other hand, have a smoky, nutty, and salty flavor, and crickets have umami flavors that taste like shrimp in soy hoisin sauce.

What does it Taste Like to Eat Roasted Crickets?

Roasted crickets have a smoky shrimp flavor, and they are also nutty and astringent in flavor. Roast crickets can be very salty and dry, with a flavor similar to shrimp-flavored chips or popcorn.

Roasted crickets are an excellent healthy snack. If you like crunchy shrimp, you should try roasted crickets. They taste like crispy shrimp dipped in hoisin sauce with a nuttiness added!

Why shouldn’t we Consume Crickets?

They can potentially reduce the nutritional value of many foods, particularly those made from plants (like rice or flour). Phytic acid, tannins, and lectins are examples of common anti-nutrients. An insect’s exoskeleton, or “chitin,” has been found to contain trace amounts of these anti-nutrients.

How do Dried Crickets Taste?

Dried crickets taste nutty, smokey, and shrimpy! Dried crickets have a flavor similar to shrimp-flavored chips with roasted almond notes. Dried crickets are not only delicious, but they are also high in protein and fiber!

Crickets are currently one of the most popular health foods on the market. Crickets have long been popular in South America, Asia, and Africa, but they are only now becoming popular in the West. Crickets have a distinct shrimp flavor and a smoky and nutty flavor. We recommend eating fried crickets while drinking your favorite beer!