What is Vegan Ice Cream?

Vegan ice cream is a dish that does not contain any animal products. For individuals who cannot or do not eat animal or animal-derived items, such as eggs, milk, cream, or honey, this is commonly used to substitute traditional ice cream. There are various vegan ice cream manufacturers on the consumer market and several ice cream parlours that make vegan varieties regularly.

Finding a base component that can replace milk and cream is the most challenging part of making vegan ice cream. Vegan ice cream comes in a variety of flavours, but none of them taste exactly like regular ice cream. Almond milk, rice milk, and soy milk are the most prevalent milk alternatives. Some consider coconut milk to be the best basis in terms of texture and creamy flavour, albeit this comes at the cost of high-fat content.

Many different honey and sugar substitutes can be used to sweeten vegan ice cream. Some vegans avoid processed sugar because it may have undergone a bone-char procedure, which uses pulverized animal bones to whiten the sugar’s colour. Maple syrup and maple sugar, as well as numerous sugar replacements, are popular sweeteners.

Fortunately for ice cream fans, practically any ice cream flavour can be converted to a vegan version. Fresh blackberries, raspberries, or strawberries provide an astounding hint of sweetness and tang to berry vegan ice creams. Lactose-free cocoa and cocoa powder make chocolate vegan ice creams with rich, deep chocolate flavour. Even rocky road, which is generally off-limits due to the presence of gelatin in most marshmallows, may be made vegan by using pectin-based vegan marshmallows.

Vegan ice cream isn’t just for people who abstain from eating animals. Lactose-intolerant folks may be able to rediscover the delight of ice cream with these dairy-free varieties. Many vegan product lines also make conscious use of organic and fair trade ingredients, so individuals concerned about environmental sustainability and social justice can enjoy a double-fudge vegan sundae as well.

Vegan ice cream can be purchased at many health food stores and even some ice cream cafes. Check the ingredients carefully, especially if someone eating the ice cream has a soy, coconut, or nut allergy. Vegan ice cream is often priced similarly to traditional ice cream, though organic or fair trade components may command a higher price.

As previously stated, not all vegan ice creams are much healthier than dairy-based ice creams. There are a few things to look for when buying plant-based ice cream that is excellent for your health.

Here are some recommendations for non-dairy ice cream that are healthy:

Saturated fat, as previously stated, can elevate the amounts of dangerous cholesterol in your body. Before buying plant-based ice cream, check the nutrition label to see how much-saturated fat it contains. Choose one with a serving size of no more than 5 grammes of saturated fat.

Sugar is linked to a variety of health issues. High blood pressure, weight gain, fatty liver disease, inflammation, and diabetes have all been associated. A high sugar intake can also increase your chances of heart attack or stroke.

Vegan ice creams have a wide range of sugar content. Some of these items contain a lot of sugar, and others are deficient in sugar, substituting it with erythritol or other sugar substitutes.

Think About the Calories

Calories can quickly mount up. You will acquire weight if you consume more calories than you burn regularly.

Vegan ice creams have a wide range of calorie counts, and some servings include 200 calories or more. And a single serving of alternative options contains 100 calories or less.

When picking which vegan ice cream to buy, read the label. A low-calorie option will be the best match for your needs if you want to maintain your weight or lose a few pounds.

Is Vegan Ice Cream Better for you?

In an email to LIVEKINDLY, Susan Levin, director of nutrition education at PCRM (Physicians Committee for Responsible Medicine), said, “Undoubtedly.” “Dairy contains intrinsically harmful components and is not present in plant-based goods, and any product with a lot of total and saturated fat should be avoided. And, of course, added sugar has no nutritional value.”

Is this to say that vegan ice cream is forbidden? Absolutely not. “Look for the ones with the least fat and extra sugars. According to Levin, it’s healthier than dairy but not a portion of healthy food.

It also depends on the flavour of ice cream you choose. Is it a pint of Ben & Jerry’s vegan ice cream with a low overrun (ice cream business jargon for how much air is put into the mix) or something lighter like NadaMoo! with a low sugar content? (a pint of its Dutch Chocolate contains only 8 grammes of sugar). Low-calorie choices are also becoming more common, with labels like So Delicious, Halo Top, and Enlightened.

What are the Ingredients in Vegan Ice Cream?

Because almond milk is still the most popular dairy-free option, it’s no surprise that so many businesses have decided to work with it. Because almonds have a neutral flavour and a similar mouthfeel to dairy-based ice cream, iconic Vermont-based firm Ben & Jerry’s creates its dairy-free ice cream from them. Vegan almond milk ice cream is also available from So Delicious, Swedish Glace, and Almond Dream. Archer Farms, Target’s private label brand, also makes almond milk ice cream. Almond milk is used in the low-calorie company Enlightened’s non-dairy pints and bars. Breyers, a well-known dairy company, used almond milk as the backbone of its tastes.

Soy-based ice cream was not only famous in the 1980s. Tofutti, a vintage brand, and So Delicious’ (neé Soy Delicious) dairy-free soy delicacies are available today. Soy Dream, Swedish Glace, vegan Cornetto, and various Trader Joe’s vegan ice cream flavours are among the other alternatives.

So Delicious is the only large vegan ice cream company that uses cashews as a basis. However, artisanal firm Van Leeuwen uses a combination of cashews, coconut cream, and cocoa butter to create its delectable dairy-free base, which is sold in select places across the US.

Oat-based ice cream is making its way onto store shelves after a storm taking the dairy-free milk world. Oatly, the oat milk pioneer, has been selling vegan ice cream in Europe for a while and is getting ready to launch in the United States. So Delicious debuted three flavours of “Oatmilk” ice cream earlier this year. This year, a century-old ice cream company teamed up with a dairy processor turned vegan Elmhurst to release “Oats Cream.” 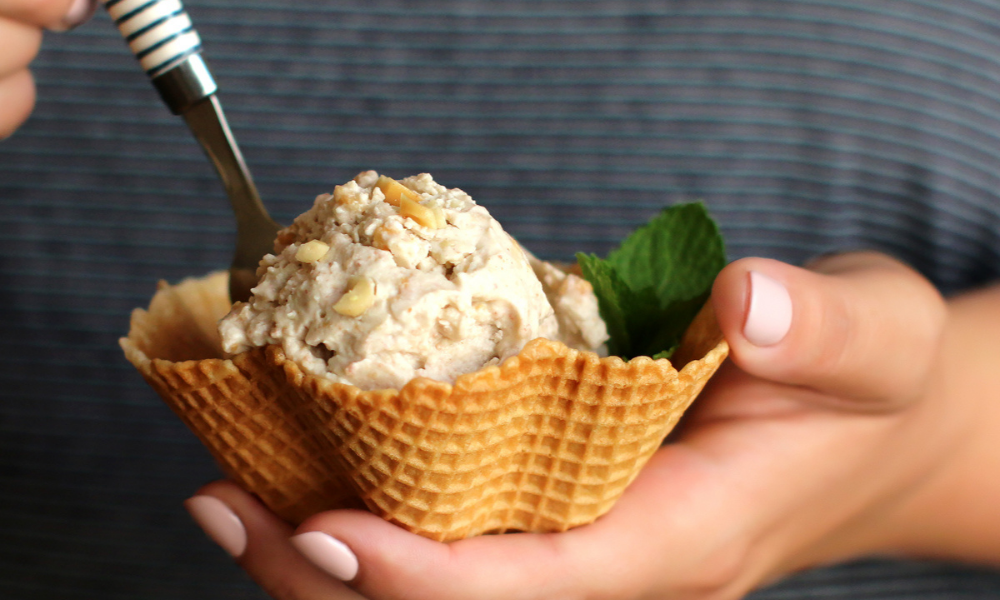 Why Vegan Ice Cream Instead of Dairy Ice Cream?

Dairy ice cream contains a lot of saturated fat because it’s usually produced with milk and cream. And this sort of fat can raise dangerous cholesterol levels.

First, let’s clear up some misconceptions concerning cholesterol. This is a chemical that your body naturally produces. And it’s not always detrimental to your health.

HDL cholesterol is beneficial to one’s health. And items in your body’s detoxification, the more of it you have, the better.

Saturated fat is abundant in full-fat dairy products commonly used in classic ice cream. As a result, dairy ice cream may cause your cholesterol levels to rise and impair your health.

Many vegan ice cream options are lower in saturated fat than dairy ice cream. As a result, plant-based ice cream is often associated with lower cholesterol levels than frozen treats made with cow’s milk and cream.

However, keep in mind that certain plant-based ice creams contain even more saturated fat than dairy ice creams. Before purchasing a product, make sure to read the nutrition information label.

A Better Option for Lactose-Intolerant People

Lactase is an enzyme that helps your body digest milk. This enzyme is produced in insufficient amounts in some people’s bodies. And they’re unable to digest milk as a result. Lactose intolerance is the medical term for this condition.

Lactose intolerance is characterized by abdominal pain, bloating, diarrhea, and flatulence. The severity of these symptoms is determined by your body’s ability to manufacture lactase and the amount of milk you’ve drank.

Lactose intolerance is more widespread than you might think. According to the National Institutes of Health, this illness affects 30 to 50 million persons in the United States.

Vegan ice cream is a better alternative than ice cream that contains dairy products if you’re one of the millions of Americans who suffer from lactose intolerance. Non-dairy ice cream is easy to digest and does not cause flatulence.

These vegan ice cream companies produce frozen sweets that are both healthful and delicious.

Greg Hoffman founded Arctic Zero in 2009. The company is dedicated to creating frozen desserts that are healthy and free of GMOs and artificial additives.

Halo Top non-dairy ice cream is made with faba bean protein as the base. This bean has fewer calories and fat than nuts, which are commonly used in plant-based frozen desserts. As a result, Arctic Zero can offer a vegan ice cream that is lower in fat and calories than most other options. Cane sugar and monk fruit are used to sweetening the brand’s products.

Coconut milk, faba bean protein, and pea protein are among the components used in this vegan ice cream. Sweeteners include sugar and erythritol.

If you want to create your own ice cream, these recipes will help you make healthy plant-based frozen sweets in the comfort of your own home. The recipes on this page are all low in fat, sugar, and calories.

The Healthiest Vanilla Ice Cream on the Planet

This delectable ice cream recipe just only four ingredients and takes only 35 minutes to prepare. There are only 60 calories in each serving, 4 grammes of sugar, and 2.5 grammes of fat.

There are only three ingredients in this ice cream recipe: full-fat coconut milk, protein powder, and a sweetener of your choice. It doesn’t get any more straightforward than that. There are 55 calories in each serving and 1 gramme of fat.

This recipe blended frozen bananas with vanilla protein powder and a sweetener such as a stevia. There are 121 calories and 6 grammes of fat in each serving.

This ice cream is made with cashews and coconut cream. The two flavours blend so well that you don’t taste either; instead, you get a great ice cream flavour.

Vegan ice cream has grown in popularity since its introduction. Prominent ice cream businesses have added dairy-free choices to their menus in recent years. This is a huge step forward for animal welfare. Cows are dedicated moms, and the dairy business is renowned for stealing their milk. Vegan ice cream is a terrific way to show your support for animals without compromising taste, thanks to a rising consumer base and increased knowledge about animal rights.