You have found the right location if you are looking for an alternative to using shiso leaves in your cooking. It is possible to successfully substitute shiso leaves with mint leaves or green onion. Alternately, Thai basil and syrup made from Plum shrubs are beautiful alternatives. Continue reading to determine which of these options is the most suitable for your situation if you are not yet persuaded. When it comes to flavours, shiso leaves have a lot going on. Therefore, if you cannot obtain one, you can use the alternatives described below to achieve a similar flavour profile. The following list will assist you in making a decision regarding the appropriate replacement for shiso. 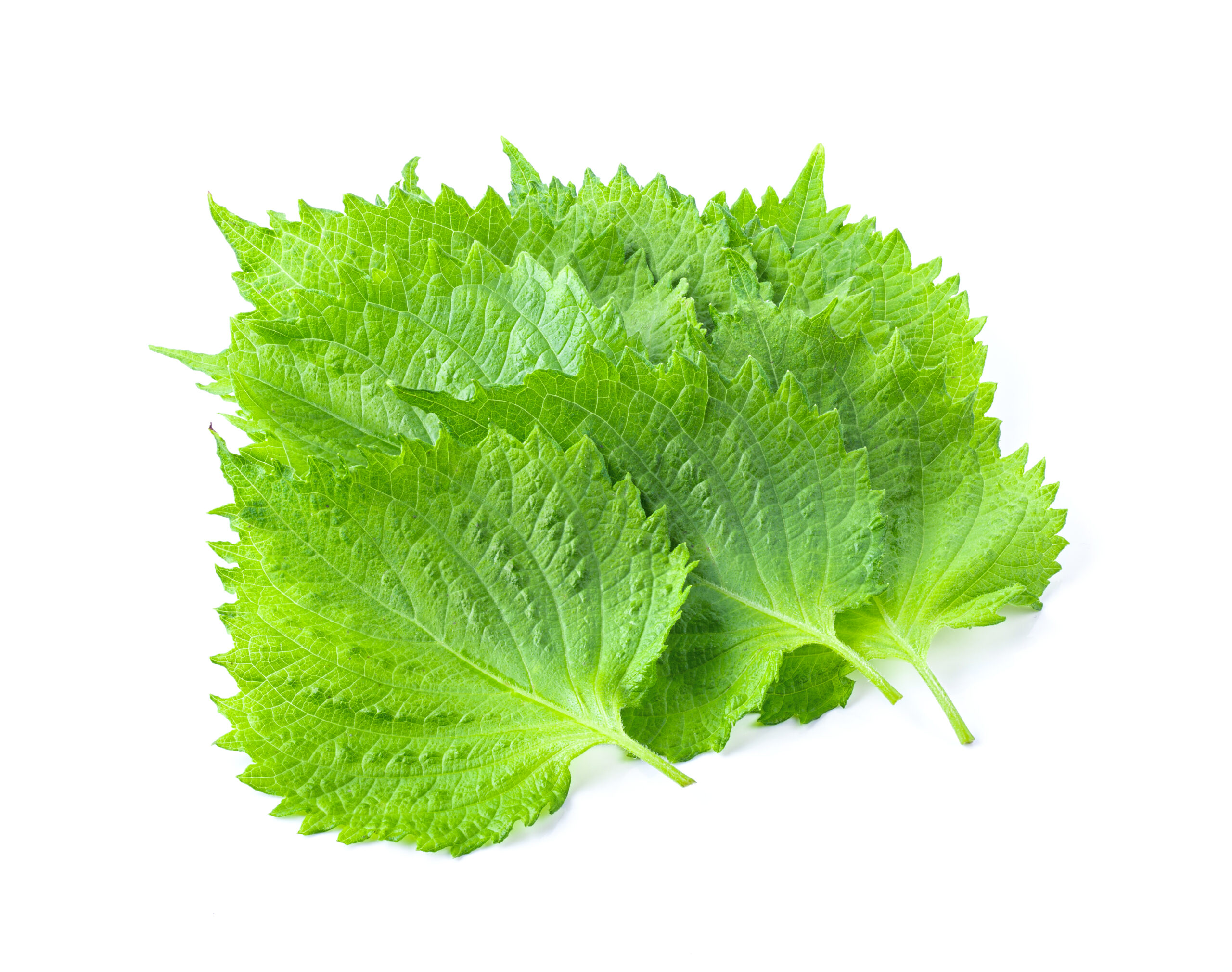 What are Shiso leaves?

Shiso leaves are a fragrant plant related to mint and are often served with sushi and sashimi. They should be eaten with the main course on the dish. If you’ve ever had sushi or a Japanese bento box with fake plastic grass separating the food, that’s supposed to be shiso leaves, with the plastic trimmed to represent the shiso leaves’ characteristic ruffled saw-toothed edges.

This is because shiso is typically used to preserve the flavours of different foods in a tray or plate from mingling together. Shiso leaves are also said to have antibacterial characteristics, thanks to phytoncides, which are thought to help keep food from spoiling when wrapped in the leaves. Indeed, the Japanese have employed shiso leaves for millennia to help prevent raw fish and seafood from spoiling.

Shiso leaves are a delicious and versatile ingredient that can be used as a condiment or a cooking element.

Even though several Japanese culinary recipes call for shiso leaves, you may have trouble finding them. I’d like to introduce you to the best shiso replacements, and please use it as a guideline!

Because mint and shiso are from the same Lamiaceae family, mint leaves are the ideal alternative for shiso leaves. As a result, they have a similar flavour and aroma.

The flavour of these leaves is more robust and sweeter, with a hint of pepper. They also offer a chilly tingling feeling due to the presence of menthol in the leaves. They may also have a slightly bitter flavour to them.

Mint is commonly linked with desserts, but due to the almost identical tasting impact, it is also well suited to the cuisine items utilized by shiso. As a result, because mint and shiso are so similar, you can use them as a substitute. The only drawback is that mint leaves are smaller than shiso leaves. As a result, you can’t use them to wrap rolls. They are, nevertheless, excellent as a flavouring agent.

Thai basil, which comes from Southeast Asia, is a common component in Asian cooking. Shiso and Thai Basil are both mints and are frequently used interchangeably.

Thai basil has a similar colour to shiso, but it also has a similar flavour. It has a spicy undertone and a bittersweet, sour flavour similar to shiso. Thai basil, like mint leaves, cannot be used to wrap rolls since it is smaller in size. However, it is ideal for enhancing the flavour of your food.

Sweet basil has a delicate flavour that blends sweet and sour. Pepper, mint, and anise flavours are also present. As a result, it possesses flavours similar to shiso, making it a good alternative. If you want more volume in your meals, I propose pairing sweet basil with mint leaves.

Shiso leaves can be replaced with grape leaves. They have a smooth texture. They are also acidic and lemony in flavour, just like shiso. Furthermore, because they are stocky, they can survive extensive cooking times.

The most excellent feature is that they are more readily available and large enough for wraps. As a result, they will not only offer your food a comparable taste but also a similar appearance! Remember that grape leaves are best used when they are still fresh.

Green onion is one of the most frequent ingredients that can be used to replace shiso leaves. Green onions, like Shiso leaves, can give your food a similar green tint. Furthermore, its crisp and refreshing flavour complements Japanese cuisine such as Sashimi.

On the other hand, green onion has a slightly pungent flavour compared to shiso leaves. As a result, use it in smaller amounts.

The flavour of lemon basil is comparable to the flavour of sweet basil, and on the other hand, its flavour is more robust than regular basil. You can use lemon basil in place of shiso leaves because they both have a flavour profile reminiscent of a combination of sour and somewhat bitter notes.

I recommend combining mint leaves with lemon basil to generate a flavour reminiscent of cool mint.

Even though cilantro is not a member of the mint family, it is possible to use it as a stand-in for shiso. It has a tangy flavour reminiscent of citrus and a strong aroma. Therefore, one may argue that the flavour is comparable to that of shiso leaves in some ways.

The fact that cilantro is a standard product that is used by people all around the world is the most excellent part. As a result, you should have no trouble finding it in the grocery stores close to you or even in your own kitchen.

The flavour of lemon thyme can be described as both sweet and savoury. As a result, you can also use it in place of shiso leaves if you so choose. However, mint in conjunction with lemon thyme is the most effective technique for achieving a flavour profile analogous to shiso leaves.

It may be tough to add colour to the meal because pickled plum appears different from shiso leaves. Minced pickled plum is a terrific choice if you want a refreshing feeling and freshness in your shiso.

Please remember that pickled plum has a sour flavour that shiso does not. Making pasta with minced pickled plum and other ingredients is a fantastic idea, in my opinion. It could also be used as a secret ingredient in tempura and other dishes.

The leaves of the Korean perilla plant are frequently eaten alongside meat that has been cooked in the Korean style. People eat the grilled meat by wrapping the plant’s leaves around the meat before eating it. Because Korean perilla is likewise a form of perilla leaf, it is possible to utilize it as a suitable replacement for shiso leaves.

It has a distinctive flavour that cannot be compared to shiso. The leaves of Korean perilla are highly nutritious, even though they are far more robust than the shiso leaves and feel considerably different in the mouth. Therefore, I humbly request that you use them whenever possible.

You can eat it raw, but I think it will be simpler to eat if it is cooked. For example, preparing tempura with Korean perilla is highly suggested because it features prominently in the flavour profile of this dish.

Myoga, a Japanese Shiso substitute, is another excellent option; it has a similar flavour to Shiso and is Japanese ginger. When using Myoga in a dish, you will notice a refreshing and bitter flavour with a subtle pungent note that can be used in Shiso-based dishes.

Although the aroma is not as strong as Shiso, the flavour of myoga can significantly enhance the flavour of your cuisine. With some minced Myoga on top, you may make soba noodles and sashimi.

A characteristic feature of the kaffir lime leaf is the presence of two leaves that are linked to one another. The leaf with the oval shape is different from the leaf with the heart shape. The surface of fresh kaffir leaves is glossy and bright green, and they have a pleasant scent that is reminiscent of citrus. The flavour is similar to that of lemon in that it is sweet, sour, and crisp, and it helps alleviate the weight of any rich dish. It is used extensively in the cooking of Southeast Asian countries.

You may get the same nice flavour from it by cooking it for an extended period as you would with shiso leaf, or you can shred it and sprinkle it on top of your rice and noodles. 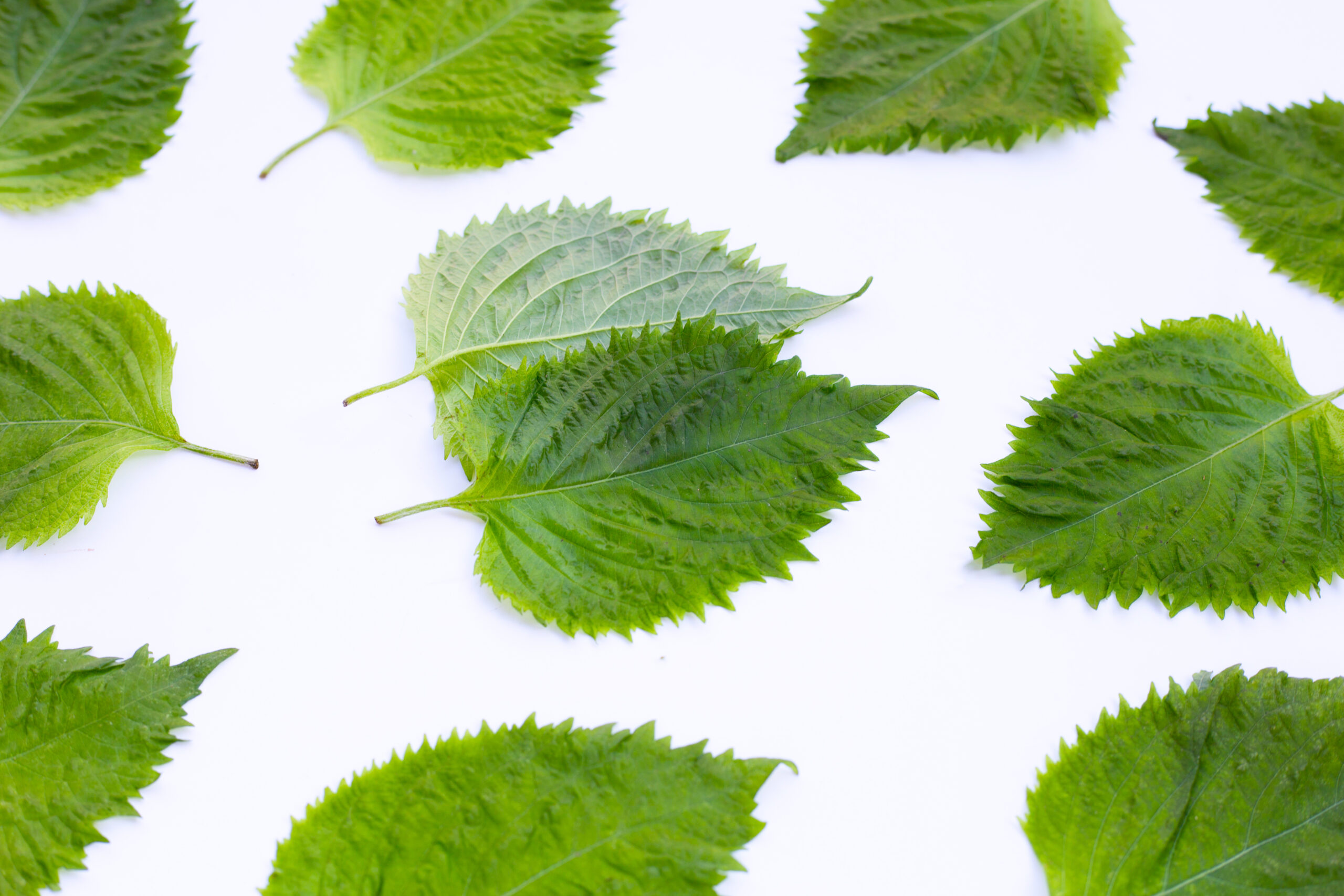 The best way to discover the flavour of shiso is to go out and purchase some fresh shiso and use it in one of the delectable dishes provided further down in this article. The flavour of shiso is exquisite when it is used as an ingredient in cocktails, in dishes inspired by Asian cuisine, and as a fantastic garnish for many different types of food! Now, let’s get to work in the kitchen!

These Corn and Shiso Fritters are a delightful snack that is crispy yet soft and are ideal for presenting as an appetizer on game day because they combine crunchy corn and soft shiso.

Onions and carrots are breaded in tempura and wrapped in leaves of powerful shiso herb before being fried. You can eat them plain, with ketchup or soy sauce, but they’re delicious either way!

The mere appearance of this beverage has caused my mouth to start watering. It’s such a stunning view! The perfect summertime beverage to perk you up!

The lemony, minty, and slight spiciness of the shiso leaves make them an excellent complement to the meat that they are served with. The next time you make meatballs give adding shiso leaves a shot.

These adorable miniature sushi cones are stuffed with all the delectable components of a California roll. Crabmeat, cucumber, kewpie mayonnaise, and not forgetting… sushi leaves!

What is the Flavour of Shiso Leaves?

SHISO, a long-used Japanese herb, is beginning to pop up in restaurants throughout the country, where chefs are drawn to its bold flavour. It has a strange, vibrant flavour that smells like mint, basil, tarragon, cilantro, cinnamon, anise, or a mountain meadow after a rainfall.

Shiso leaves have spiky edges and are crimson or green in colour. They are similar to basil leaves in appearance. Furthermore, they have a minty, bittersweet, and tangy flavour similar to basil. Shiso leaves have a strong flavour and can be used to create a wide range of flavours. Basil, cinnamon, tarragon, mint, cilantro, and many other flavours are all there in just one bite!

What’s remarkable about shiso leaves is that their flavour varies depending on your leaves. The green leaves, for example, have a mint and cinnamon flavour, but the red leaves have a cumin and basil flavour with spearmint and anise.

Is Shiso the Same Thing as Basil?

Shiso is a type of mint that grows in Japan and belongs to the same family as basil. Just like the other members of its family, shiso has a fresh and lively shade of green coloration. One could compare its taste to mint with a gingery aftertaste, even though its flavour has also been described as herbaceous or lemony. It has fancy ruffled edges (1) and a pleasingly strong bite.

Shiso is one of the exceptional ingredients that are used in Japanese cuisine. Many of your dull recipes will benefit tremendously from adding this flavour, which is both subtle and nuanced. However, because it is not the easiest thing to obtain a leaf in the United States, you may need to discover a Shiso alternative to become an expert in the art of preparing Japanese dishes. Each replacement provides a distinct aromatic component that can elevate the quality of your dish. I hope that the information I provided might help you locate a suitable alternative to shiso.