Like some religions, the “holy trinity” refers to the significant peppers in making Mexican cuisines. And the Guajillo pepper is part of that trident of importance in the study of Mexican chilies.

Guajillo pepper is 2 – 4 inches long, with a deep red color and shiny skin. It’s mildly hot, with a 2,500-5000 SHU on a Scoville scale. The pepper is famous for its unique blend of sweet and smoky taste, with a gentle flavor suggestion of tea and fruit. And these features make guajillo Pepper a “repeat offender” in most Mexican and North American dishes. Like said before, guajillo pepper is part of the Mexican “holy trinity” of chilies, alongside ancho peppers and pasilla peppers.

This pepper comes in different sizes and forms, depending on your preference. Compared to the average guajillo pepper, it has a smaller size that’s also hotter than the regular one and is referred to as “Guajillo Puya.” The regular guajillo pepper is mildly hot and richer in taste than Guajillo Puya.  And it can also come in different forms, such as; dry and powder form, to be sprinkled into cooking. You can also add water to Guajillo pepper or powder and use it as a sauce or paste. And it has a distinct taste that’s regularly used in;

Scarcity and availability of goods are factors no one has control over. So, if you’re ever in a situation where you can’t get your hands on guajillo pepper, below are other spices that can be used instead. 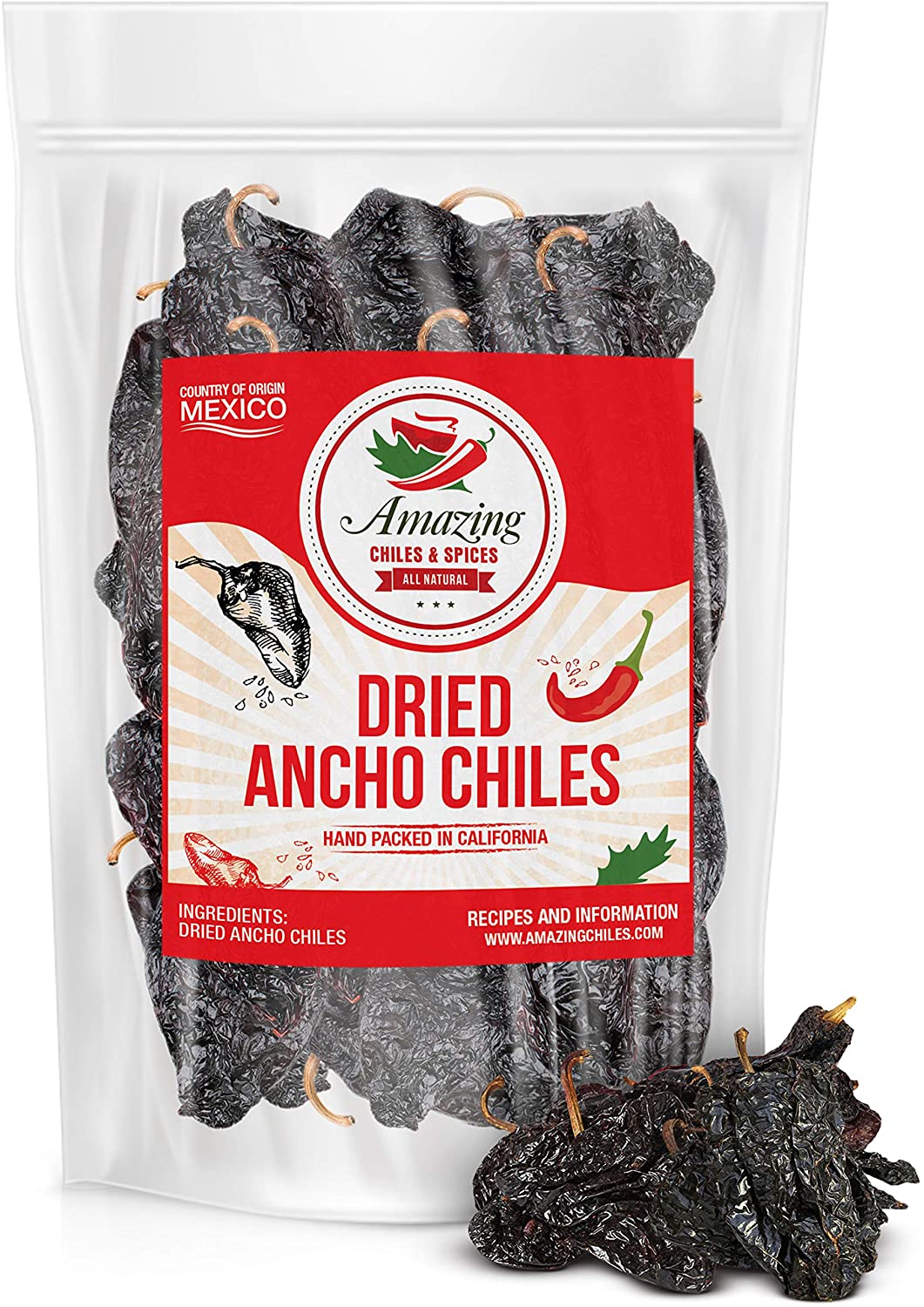 This pepper is meatier and sweeter than guajillo pepper and has a smoky taste but a hint of raisin and chocolate. With a 1000-2000 SHU on a Scoville scale, ancho pepper doesn’t rate as high as guajillo in heat level. Ancho pepper is dry poblano pepper with a darker and juicier look; they do very well in stews, soups, marinades, moles, sauces, and meat rubs. These features make them a good substitute for guajillo pepper, but you’ll need twice the amount if you want its hotness to be close. 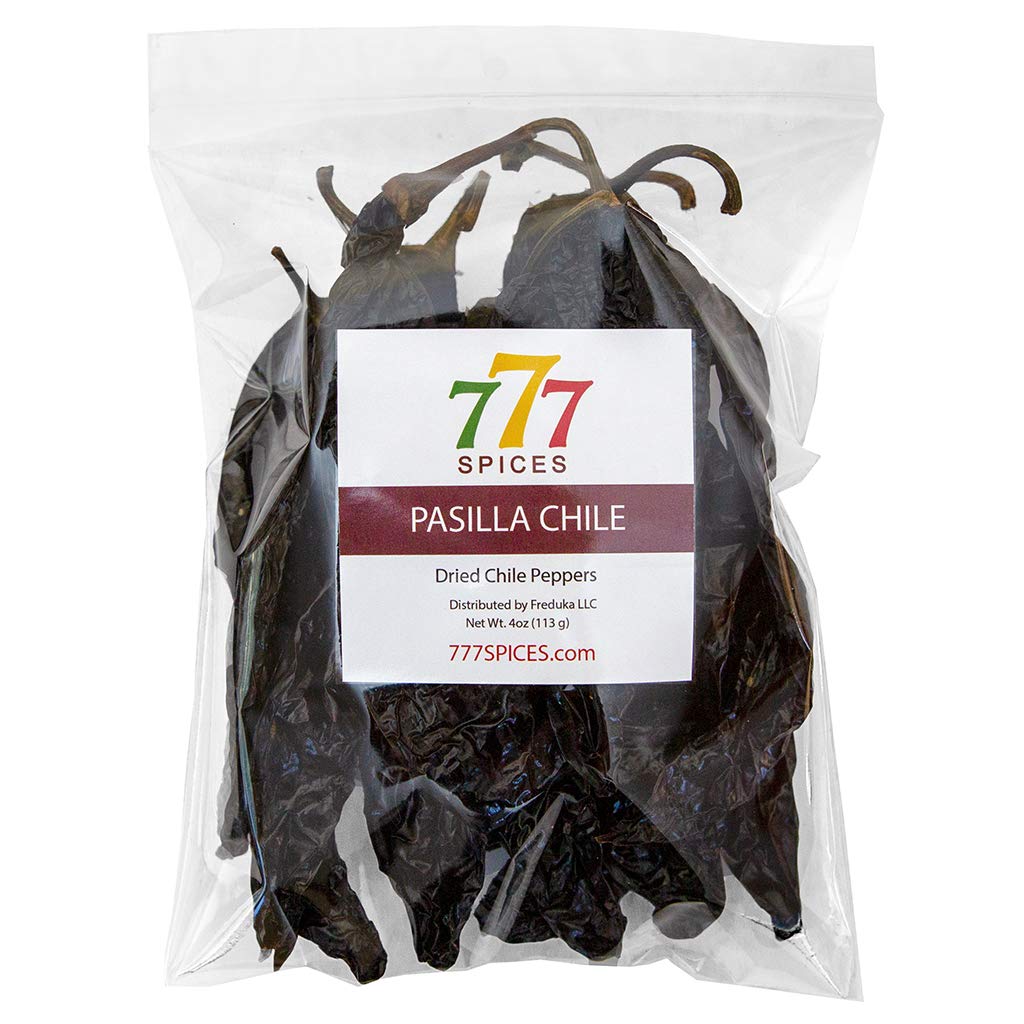 Another name for pasilla pepper is “pasilla negro”, pronounced in their wrinkled and dark skin. They are long and thin and possess a mildly sweet taste with a hint of cocoa and berry. Pasilla peppers also have a hotness of 1000-2500 SHU, meaning they can be somewhat milder. But they’re similar in taste to guajillo and do very well in stews, sauces, moles, and other dishes. You can use equal amounts of pasilla peppers to replace guajillo, but try upping the quantity if you want more heat. 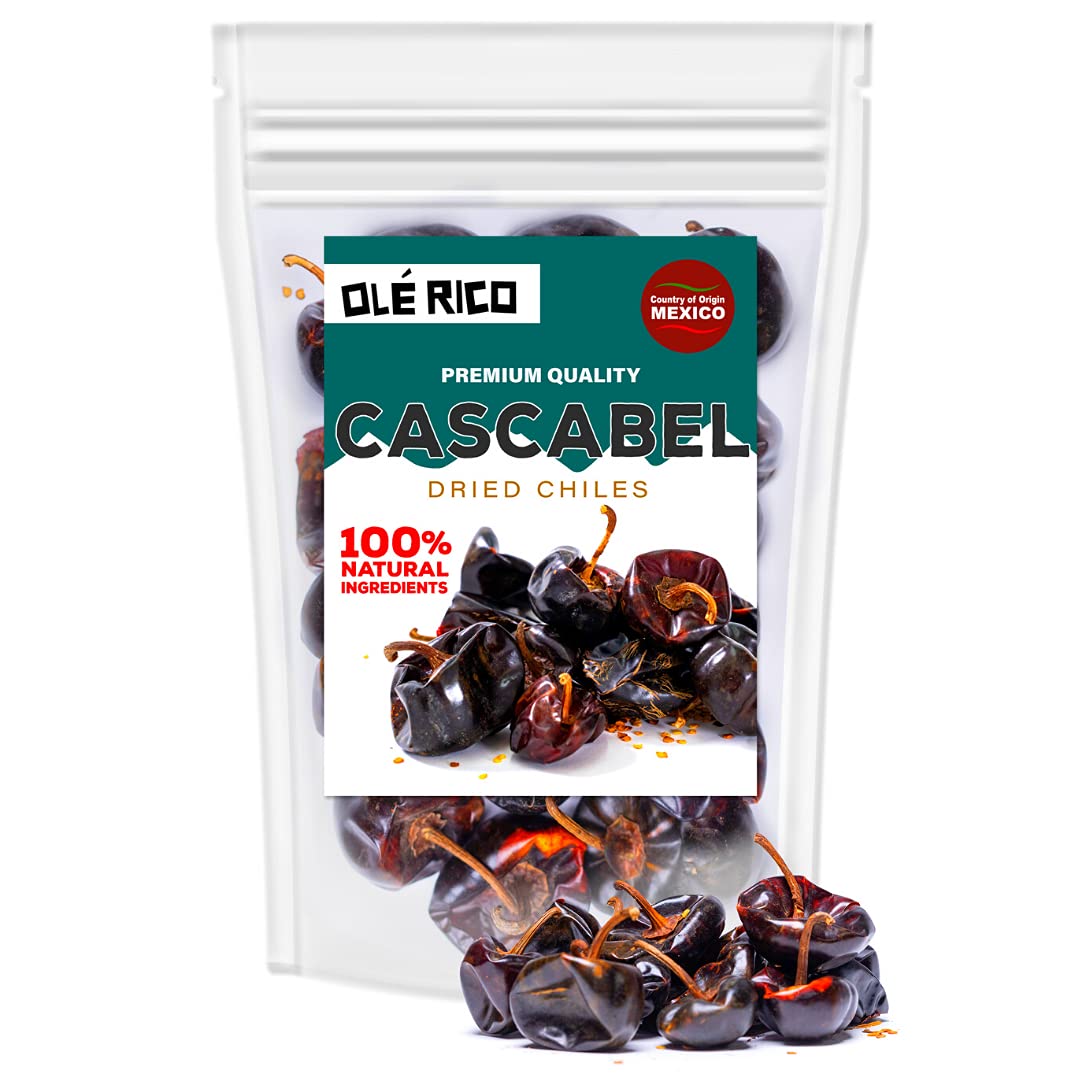 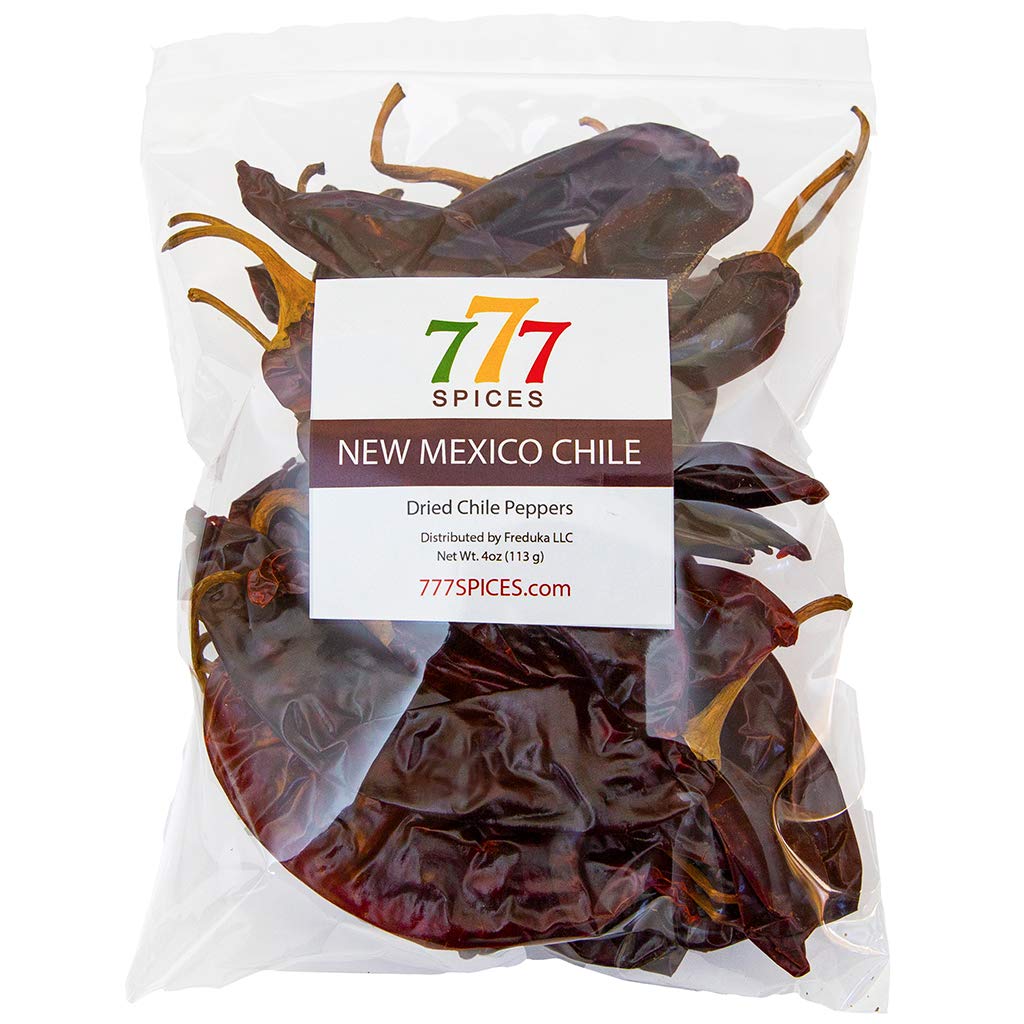 These substitutes are similar to guajillo pepper, as they share an earthy and sweet taste,  with a hint of cherry and traces of acidity. They are also longer than guajillo pepper, ranging from 12-14cm, with shiny brown-red color. New Mexico Chilies reach 800-1400 on the Scoville scale, making them milder than guajillo peppers. But they’re great in chutneys, stews, seasonings, dry rubs, and salsas. New Mexico chilies are perfect for imparting great flavor and reducing the hotness expected from guajillo. So, you can use them in your cooking in equal quantities. 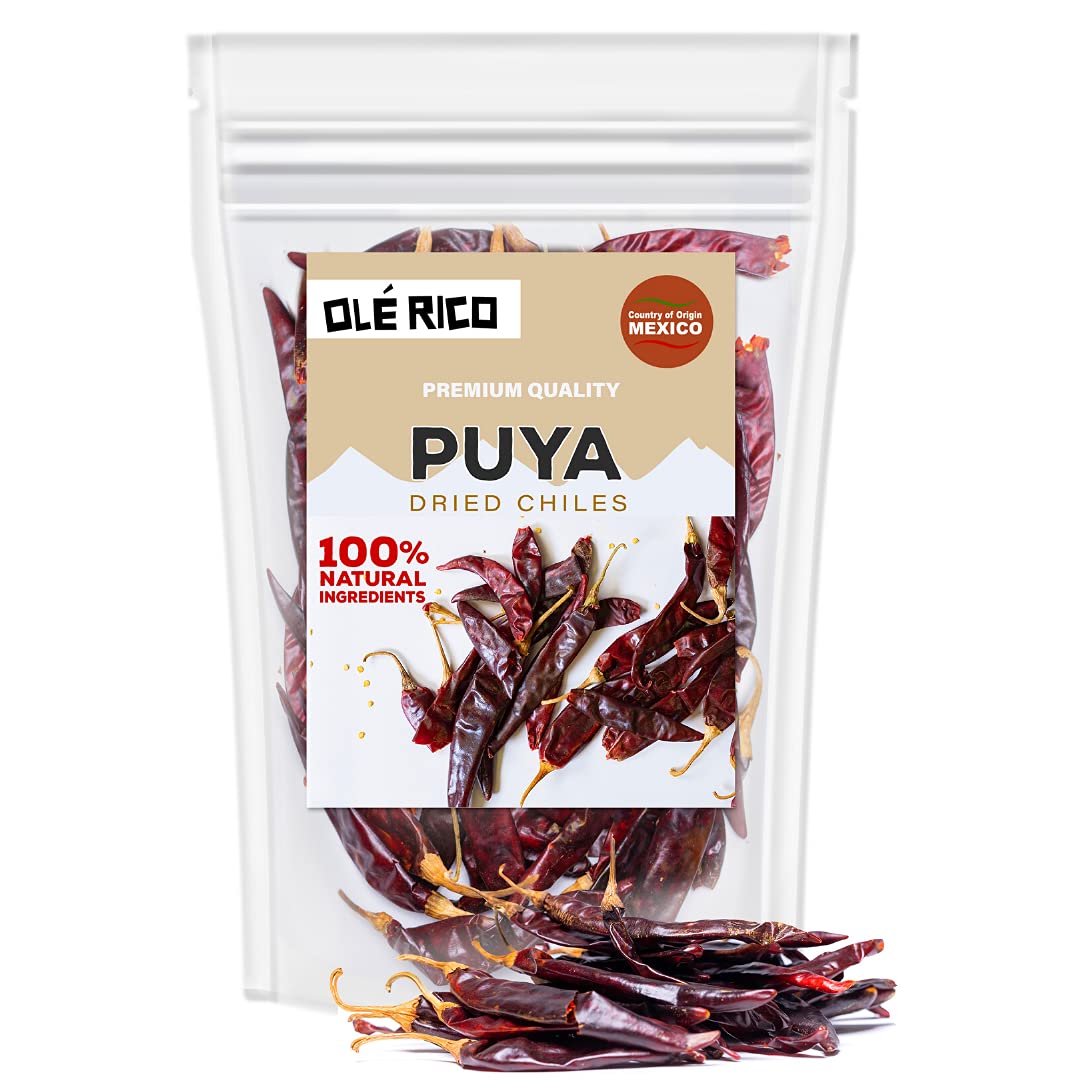 These peppers are for people who insist on the fiery nature of guajillo pepper or even want more hotness, as it is smaller in size but hotter than guajillo. It has a 5,000-8,000 SHU (yeah, this one’s for the brave). Plus, it possesses a light fruity flavor, with a hint of cherry and licorice. Maybe not so similar in taste but very identical in heat (even hotter) to guajillo, and it’s a regular item in some sauces, salsas, stews, cooked vegetables, dips, enchiladas, and casseroles. Even if you’re not a fan of flaming hot peppers, you can also use puya chilies instead of guajillo. But use less of it- about ¼ to ½ of what is called for in the recipe.

These are chilies very similar to guajillo due to their fruity, sweet, and smoky taste. But the exception is there’s no hint of tea or berries in the flavor of this substitute- only sweet, fruity and smoky. They’re also hot, but not much; about 2,500-3,000 SHU on the Scoville scale. And they can be found whole, in flakes and powder form. Plus, you’ll also see Mulato chilies as a popular ingredient in sauces, stews, moles, and soups. And they can equally replace guajillo pepper in your dishes.

As we all know, there’s a regular chili we’re all used to and already know. It’s the globally recognized chili, and many probably don’t even know there are other chilies aside from it. Regular bright red chili peppers are seldom scarce and can be found anytime needed. And if your dish doesn’t have a taste specification for guajillo pepper, then these chili peppers can also be your saving grace. Regular chilies also offer a heat level that though it isn’t as strong, still works in most dishes. And the reason is that you’re used to the spicy level of this substitute, so it’ll barely taste different in your cooking.

How do you know guajillo pepper?

Guajillo pepper is mildly hot. It is a dried Mirasol chile and is very common in Mexico and North America. It is referred to as part of the “holy trinity” of chiles in Mexico. So, if you need to find one, these are details to put in mind.

Does guajillo pepper have other names?

Yes, it’s also referred to as a “Chileguaco,” or just “Guajillo.” And both names are native to their region.

How do I differentiate guajillo from California chiles?

Guajillo pepper is unique in its ways and gives a special feel to your dishes. Its blend of smoky, sweet, tea, and cherry flavors makes it distinct, but not so much that it’s irreplaceable. As you can’t always be sure to find guajillo anytime you need it, choose from any of the substitutes mentioned above. And do so because and no spice should stop you from making your favorite dishes.