The fluids and meat of salted fish are used to make fish sauce, which is a condiment. It is believed to have originated in Southeast Asia, although it is now found worldwide. Fish sauce can be used in a variety of meals, including Pho soup, Pad Thai noodles, stir-fried veggies, and more.

Many people are put off by the stench, but what does fish sauce taste like? Don’t worry if you don’t know what it tastes like — keep reading. 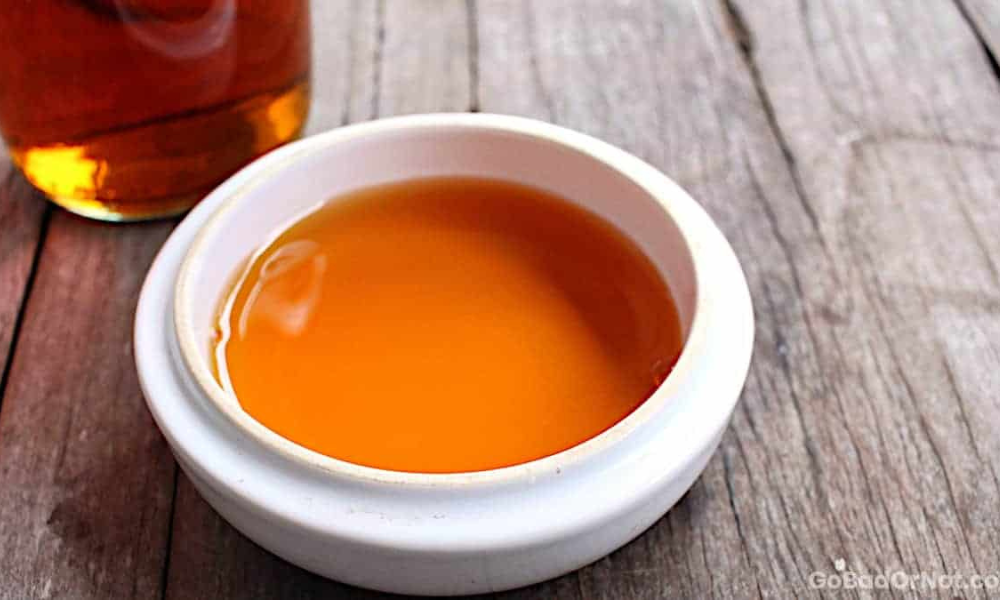 What is Fish Sauce, Exactly?

Fish sauce is an aromatic Asian condiment that gives many meals a salty, umami flavour. It is usually created by fermenting fish with salt and water.

Fish sauce can be used in place of soy sauce or oyster-flavoured sauces in recipes.

This seasoning will give the dish the same savoury flavour.

This condiment will give your soup just the right amount of saltiness without overpowering the other flavours.

Any Thai cuisine can benefit from the use of fish sauce, which adds umami to each bite.

Depending on how they’re created, fish sauces in Asia come in a variety of flavours.

– One of the most frequent forms is Vietnamese fish sauce, which is a clear amber colour, but Filipino fish sauce has a lighter brown hue.

– Thai fish sauce is frequently sweeter than fish sauce from other Asian countries since their version contains more sugar.

– In China, there isn’t just one type of this condiment; instead, there are a variety of sauces, each with its own distinct flavour profile.

What is the Taste of Fish Sauce?

Have you tried fish sauce before? It’s a salty liquid that smells like the sea and tastes better than any store-bought salad dressing.

Fish sauce is an umami-rich condiment that can be used for more than just dipping sauces.

It has an odd but appealing flavour profile of saltiness, hints of sweetness from leftover sugar, and acidic undertones primarily from fermented anchovies.

Vitamin B12, which is abundant in this sauce, protects against neurological damage and mental diseases such as dementia and depression.

Fish sauce is used in a variety of Asian dishes.

Still, it originated in Thailand and Vietnam as a method of preserving fish by adding salt to them (thereby removing their natural flavour).

After that, it was left to ferment for months until it was suitable to eat.

When the taste has been adequately caught, you’ll notice a particular umami flavour with salty undertones and a touch more sweetness on your palate than you’d get with a typical table-salt seasoning.

What Fish is Used to Make Fish Sauce?

Many individuals enjoy eating the fish sauce with their meals.

It’s used to add flavour and saltiness, but what precisely does this condiment contain? Anchovies are little fish that dwell in the sea and are used to make fish sauce.

The anchovies are gutted and then fermented in a huge barrel with salt for up to two years.

The final product is made up of around half water, half anchovy extract, and other components, including sugar and vinegar.

Different varieties of fish or shrimp paste are also used by some manufacturers, although they’re not frequent additions.

What is the Smell of Fish Sauce?

It’s prepared by fermenting salted anchovies with seawater and draining the liquid to make this salty brown paste, which comes from an ancient method of preserving fish.

Fish sauce has a strong odour that some people find offensive since it reminds them of decaying seafood or sewage when they first smell it.

However, when cooked properly in dishes like Thai curries and Vietnamese pho noodle soup, many people love the flavour profile.

For untrained cooks, the aroma can be overwhelming, but once you understand how to use this spice effectively, it can become a key component in various meals.

What are Best Fish Sauce Brands?

In many Asian cuisines, fish sauce is the most important and widely used condiment, but what constitutes good fish sauce differs from person to person.

You won’t be dissatisfied with any of the brands because they all have their own characteristics and flavours.

Here are some of Amazon’s best-selling brands for you to try: Fish Sauce from Thai Kitchen is a “Best Seller” with over 15000 reviews; One of our favourite recommendations is Red Boat Fish Sauce, which is prepared by hand in Vietnam using centuries-old processes.

Thai Kitchen is the first firm, and it makes a high-quality product with the correct combination of salty and sweet flavours that stays consistent throughout the bottle.

In addition, none of the items from this brand contain MSG or preservatives.

It is made by a family on the island of Phu Quoc, who have been manufacturing it for over 40 years.

This brand of fish sauce was not only the best-selling on Amazon, but it also earned fantastic reviews like “This stuff is amazing.” or “It doesn’t have the same strong umami flavour as other brands.”

What are Some Tips for Choosing the Best Fish Sauce?

Fish sauce is a tasty and adaptable condiment, and it can be utilized to enhance your cooking experience in a variety of ways. With that in mind, I’ll give you a few additional pointers on how to get the most out of your fish sauce.

The fish sauce from the initial draw is more flavorful. You can tell if the fish sauce you want to buy is from the first draw by reading the label, and it should have a more intense, pungent, and umami-rich flavour.

By squeezing a few drops of fish sauce onto your finger, you can determine its quality. The thicker the fish sauce, the more it should stick to your finger.

Anchovy fish sauce is less salty than regular fish sauce, and it also has a particular fragrance that distinguishes it from other fish species, such as mackerel and scabbard fish.

When purchasing fish sauce, look for packages that include only natural ingredients. This implies the ingredient list should only include names you’re familiar with, such as fish and salt. There should be no additional preservatives that affect the fish sauce’s inherent flavours.

Examine the location of the fish sauce’s bottling. The quality of fish sauce is also determined by the location, in addition to the ingredients. In Vietnam, for example, Nuoc Mam from Phu Quoc is usually of the highest quality when compared to other places.

Keep in mind that fish sauce comes in a variety of concentrations. Choose a low-degree bottle if you want to use it for cooking. If you wish to use it as a dip, add high-temperature fish sauce.

Not all fish sauces are created equal; and each brand has its own particular flavour profile, and the type of fish used also determines the sauce’s final flavour.

Even though all types of fish sauces have some flavour similarities, they can have various names. Fish sauces can be referred to by three distinct names depending on where they are produced.

The fish sauce Nam Pla is used in Thai cuisine, which is located in Southeast Asia. “Fish water” is the direct translation of the name. Anchovies and salt are commonly used in Nam Pla, and this Thai fish sauce is saltier and has a stronger aroma than other fish sauce varieties.

In Vietnam, another Southeast Asian country, fish sauce is known as this. This Vietnamese version of fish sauce is created using anchovies and salt, just like the Thai version. When compared to Nam Pla, it has a softer odour.

Depending on the availability of fish and other variables, different regions in Vietnam generate different types of fish sauce. The best Nuoc Nam is widely acknowledged to come from Phu Quoc, a Vietnamese island off the coast.

On the label of some Vietnamese brands, the amount of nitrogen in the product is also stated. This number shows the fish sauce’s quality, and the nitrogen content of better fish sauce is higher than that of inferior fish sauce.

Patis is a Filipino version of fish sauce that is a must-have in Filipino cooking. It’s manufactured from fermented fish or bagoong as a by-product, and Patis takes longer to create than other forms of fish sauce because of this.

Patis is generally prepared before eating, unlike other fish sauces, which are usually eaten raw. This holds true for any cuisine, even when used as a salad garnish.

What can you do with Fish Sauce?

The culinary world’s greatest treasure is fish sauce. It has a distinct flavour yet is nevertheless extremely flexible in the kitchen. Anything will taste better if you add fish sauce to it. Here are a few methods to improve your eating experience using fish sauce.

As a Dip: Fish Sauce

Any meat or vegetable meal will benefit from the addition of fish sauce, and it gives the food an extra layer of natural taste. Most people, however, add other ingredients to the sauce to make the flavour profile more complex.

Sugar, garlic, and chile are all ingredients in a must-try Vietnamese recipe for improving the flavour of fish sauce. In Vietnam, this combination is known as Nuoc Cham, a sweet and savoury dip that is aromatic but not fishy.

As a dip, the fish sauce goes well with boiled dishes and other bland foods that need a boost of flavour.

Use fish sauce to marinate your food.

Fish sauce is commonly used to marinade many sorts of meat in Southeast Asia. Chicken, hog, beef, and any other meat you can think of fall into this category.

Fish sauce is a good way to bring out the tastes of other foods. As a result, when you let it soak into the meat, the flavours are elevated to a whole new level.

Bun Thit Nuong (Vietnamese grilled pork) is a popular meal in Vietnam that makes excellent use of this technique. Consider adding fish sauce to your shopping list the next time you throw a BBQ party.

To minimize sodium, marinate beef with fish sauce instead of salt.

Fish sauce can also be used in place of salt in cooking. (2) Fish sauce has a wide range of flavours that might complement your cuisine better than simple seasonings like salt and pepper.

In a stew or noodle broth, add fish sauce. When the fish sauce is in the pot, you can’t really smell or taste it, but a stew with fish sauce will undoubtedly taste better than before.

Fish Sauce Can Be Added To Other Sauces

Bolognese sauce, I’m sure you’ve heard of it. To make it even tastier, add 2-3 teaspoons of fish sauce. Barbecue sauce is another contender. When it comes to these flavorful sauces, you can’t go wrong with fish sauce.

As a Dressing, Use Fish Sauce

To add a little more zing to your salad, use fish sauce. Fish sauce can add a new dimension of taste to your favourite appetizer. Fish sauce is often used as a salad dressing base in Vietnamese cuisine.

Fish sauce, on the other hand, can be used in Western cuisines, such as coleslaw. When you’re finished with the other ingredients, add a spoonful. It may sound strange, but I assure you that it will be delicious.

Good fish sauce is created from a fish-and-salt mixture that has been fermented for up to two years. Oily fish, such as anchovies, is traditionally placed in a barrel with salt and pressed slowly to extract the liquid. Although anchovies are commonly utilized, some fish sauces are created with shrimp, krill, or mackerel. Fish, water, and salt are the essential components of an excellent fish sauce. Sugars like caramel or molasses, as well as roasted rice, are sometimes used, but they aren’t required.