The original recipe for green goddess salad dressing was created in 1923 by Philip Roamer, executive chef at the Palace Hotel in San Francisco. The dressing was inspired by the great actor George, a fan of salad dressings. It comprises a combination of mayonnaise, sour cream, capers, lemon juice, and vinegar. Today, the recipe has been updated to add spinach and avocado, which give the dressing a buttery flavor and thickens the dressing.

Green goddess dressing is a thick, delectable dressing filled with fresh herbs, strong garlic, acidic lemon, and creamy yogurt. It combines wonderfully with anything from salads to sandwiches and grilled steaks, and it can even be used as a dip or marinade. Despite its rich, acidic flavor, green goddess dressing is not overbearing. It’s versatile; you can use it for salads, sandwiches, and appetizers.

What is Green Goddess Dressing?

You can use the Green Goddess Dressing in various ways, including a spread for sandwiches, a salad dressing, or even a dip for fresh veggies. It is made with a creamy base of mayonnaise and sour cream, anchovy paste, lemon, and loads of green herbs; it is quite crisp and sour, and it only takes five minutes to make from scratch.

Although the history of the homemade salad dressing has been the subject of some debate, the most widely held belief is that Philip Roamer, the executive chef at the Palace Hotel in San Francisco, came up with the recipe in 1923 as a way to honor actor George and the success of his play The Green Goddess. That means that we’re using a recipe for salad dressing that’s nearly a century old. Something must be doing something right if it’s been around for so long.

Imagine this as a creamy version of Caesar dressing with a hint of herbs. Although citrus and garlic undertones, the primary flavors come from the herbs. The tarragon adds a distinct and intense aspect to the dish, the chives contribute a burst of flavor that is reminiscent of onions, and the dill has a flavor that is pleasingly fresh, sharp, and brilliant with overtones of lemon. However, you can use a variety of herbs based on what you have on hand and your own choice; hence, the finished product’s flavor is highly dependent on the herbs that you choose to incorporate.

This recipe was initially penned on an index card and given to me by a friend of my mother-in-law’s at my bridal shower (over 16 years ago). I’ve been making it ever since!

The anchovy is the key to a savory dressing, even though it could sound strange or even frightening to you. Trust me on this one. It imparts a flavor unlike any other, although the sauce is in no way altered to have a “fishy” taste as a result of its addition. Since then, I have liked to use anchovy paste; I don’t have to worry about chopping up the anchovies or handling them in any way. I empty the entire tube into my blender, and from that point on, I don’t have to give it another thought.

What to Put Green Goddess Dressing on

Because of the versatility of this dressing, you should always have a bottle on hand and keep it stored in the refrigerator so that you can use it throughout the week. The gorgeous green sauce can be served in a few different ways, including the following:

Tips from the Chef and Variations on the Recipe 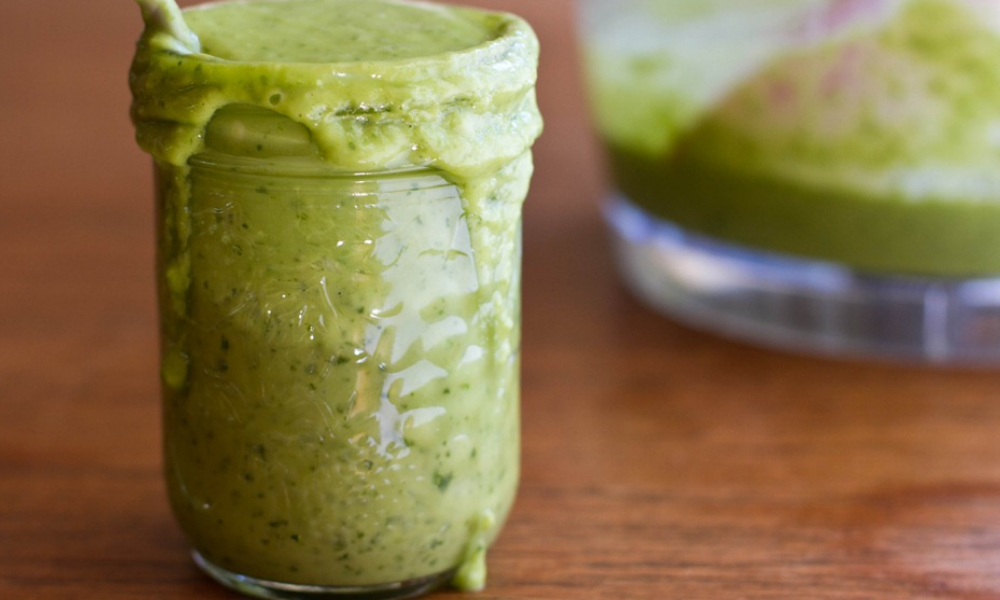 How do You Store Green Goddess Salad?

Put your green goddess salad in a container that seals tightly and stores it in the refrigerator. It will have a slightly less crisp texture the next day, but the flavor will be just as fantastic! It is highly recommended to save it for the next day’s lunch as it will make a nutritious meal.

Which Salad Dressing is the Unhealthiest Option for You?

When determining whether or not a certain food meets the criteria for healthy consumption, it is essential to be aware of this disparity. A vinaigrette, such as balsamic or oil and vinegar, will be the healthiest option for salad dressing. Still, Caesar dressing, ranch dressing, and anything else, including the word “creamy,” will be the unhealthiest option.

What is the Best Way to Serve Green Goddess Dressing?

Iceberg lettuce, baby spinach, green peppers, rom tomatoes, pepper jack cheese, hardwood smoked bacon, and grilled chicken strips are all included in the Green Goddess Salad. On top of the salad is the new Green Goddess dressing, which is light, fresh, green, and creamy, and it is seasoned with a variety of herbs.

Can We Put the Green Goddess Dressing in the Freezer?

The green goddess dressing can also be frozen for two weeks in a freezer bag or container and stored in the freezer. After being thawed, the components may take on an uneven texture, become soggy, or have a flavor that is less reminiscent of freshness. To rectify the situation, give it a good shake or combine it, and then, if desired, add a little bit of extra lemon juice or some fresh herbs to make it taste more up-to-date.

The famous green goddess salad dressing recipe was invented at the Palace Hotel in San Francisco to honor the iconic actor George Arliss. Originally, it was served with canned artichokes. The dressing was reintroduced in the 1960s and became commercially available. Its popularity grew, and the recipe became widely available in supermarkets. Many eateries, including Panera Bread, now serve it. You can make the recipe at home to test if it suits your preferences.

The green goddess salad dressing is a thick, creamy dressing with a Caesar-like flavor, and its herbaceous flavor goes well with a wide range of meals. Both the ingredients and their measurements are listed on the recipe card. The Paleo valley Organic Super greens blend contains 23 organic superfoods that give the dressing a vibrant color and gut-friendly ingredients. A rich green goddess salad dressing is great for greens and other vegetables.