What does nutritional yeast taste like? It’s an acquired taste, but many people enjoy its versatility. You can use it to make vegan cheeses and “cheese” from nuts, or you can use it to replace parmesan in pasta and tomato sauces. It’s even delicious on popcorn. Though the flavor is similar to that of cheese, nutritional yeast doesn’t have the same texture, and it has a slightly nutty or cheesy flavor.

The flavor of nutritional yeast is similar to that of cheese. While it doesn’t have the richness of cheddar or mozzarella cheese, it does have a mild cheesy flavor. Some people compare it to parmesan cheese, and it can be a great substitute in many dishes. Vegans often use this cheesy alternative as a healthy, dairy-free alternative to cheese. It can also be sprinkled on salads or added to pasta and pizza.

What is Nutritional Yeast?

Nutritional yeast is a yeast product that has been dehydrated. The yeast is derived from the Saccharomyces cerevisiae strain, used to brew beer and bake bread. Whey, molasses, and sugar beets are the most common sources of yeast for this food product. The yeast is then harvested, washed, and dried. The yeast is then crumbled or pulverized into powder and packaged for retail sale as the final product.

Nutritional yeast is pasteurized or heated to make it inactive, unlike active yeast or brewer’s yeast. Nutritional yeast lacks the leavening power of the other types because it has been deactivated. That means it’s primarily used as a flavoring agent rather than one that causes a reaction like proofing flour or brewing beer with hops and water.

Nutritional yeast is popular among vegans and vegetarians because its rich, nutty flavor mimics the savory aspects of cheese. It can be used in a variety of dishes and food genres. It’s also one of the few plant sources of vitamin B12, which is essential for brain health, infection resistance, and other functions. One tablespoon provides six times the amount of B12 you need to meet your daily requirements.

The taste of nutritional yeast is described as nutty and cheesy. The flavor is similar to that of parmesan and is a healthy alternative for vegans and people who have lactose intolerance. However, unlike cheese, it is not as creamy. It’s best used in sauces, which is the only time nutritional yeast has a distinct taste. It’s often found in vegan and vegetarian foods and is a popular supplement for those who don’t have enough time to eat cheese.

While it can have a cheesy flavor, nutritional yeast is not a standalone flavor. Instead, it needs to be paired with salt, soy sauce, and tamari to enhance taste. It’s best used in baking or as an ingredient in recipes, and it’s also a great addition to soups. Its texture and flavor are very similar to that of parmesan cheese.

What is the Smell of Nutritional Yeast?

The aroma of nutritional yeast is distinct but not overpowering. When first sniffed, this type of seasoning may appear to be unpleasant to those who are unfamiliar with it. Nutritional yeast has a nutty, cheesy aroma, according to many sources.

The flavor is not overpowering, but it can enhance the flavor of other foods such as soups, sauces, and even popcorn. It’s worth noting that the smells of some brands will differ due to the different strains of cultures used in the fermentation process.

What is the Function of Nutritional Yeast?

Yeast is a fungus that has been used in bread making for centuries. But not all yeast is created equal, and Baker’s yeast and brewer’s yeast are not the same.

It’s frequently used as a vegan cheese substitute because it contains all the essential amino acids needed for a balanced diet. It’s also an excellent vegan source of Vitamin B12, which is scarce in plant-based foods.

The taste of nutritional yeast isn’t very similar to the taste of cheese. Its flavor is nutty and savory, and it can mimic the taste of a variety of foods. It’s often used in sauces and is especially popular among vegans. It is used in sauces, but its texture and consistency are different from cheese. Nevertheless, it is a delicious alternative for many people who are allergic to dairy products and want to stay healthy.

Nutritional yeast will work as a substitute if you can’t tolerate cheese. Its flavor is similar to cheese’s, but it differs in texture and flavor. It has a nutty, cheesy flavor, and it will enhance the taste of other foods. Besides being a healthy option, nutritional yeast is also an excellent option for those with lactose intolerance.

What does “Nooch” Mean in Nutritional Yeast?

If you spend enough time around other vegans (or simply take a casual stroll through your local health food store), you’ll hear nutritional yeast called “nooch.”

I had no idea what they were talking about the first time I heard the word, and it sounded like a code name for something illegal to me, and I decided to inquire out of curiosity.

It turns out that the term “nooch” has no “real” meaning. People started calling it “nooch” somewhere along the way (probably through online forums and popular slang), and the name stuck. However, let’s be honest: nutritional yeast is a mouthful.

How can Nutritional Yeast be Used in Recipes?

Nutritional yeast is the answer if you want to add flavor and protein without adding sugar. It’s an inactive yeast fortified with B-complex vitamins, hence the name. Nutritional yeast can be used in cheese sauces or pizza dough to mimic the taste of traditional cheeses while providing more nutrients. Cooking with nutritional yeast is fun because it gives dishes an earthy, cheesy flavor that is difficult to achieve with other ingredients.

It’s a great way to boost flavor and protein in dishes like macaroni and cheese, lentils, and mashed potatoes without adding sugar.

1. If introduced too quickly, it may cause unpleasant digestive side effects.

Nutritional yeast is low in calories, but it is high in fiber. In fact, nutritional yeast flakes contain about 5 grams of dietary fiber in just 2 tablespoons (21 grams). That’s about 20% of the recommended daily allowance. A high-fiber diet can help with bowel regularity, but it’s important to gradually increase your fiber intake.

If you’re not used to eating high-fiber foods, introducing too much fiber too soon can cause abdominal discomforts, such as cramps or diarrhea. Because nutritional yeast has a lot of fiber in one serving, it’s best to start small and gradually increase your fiber intake as your body adjusts. It’s always a good idea to drink plenty of water while increasing your fiber intake to keep your digestion in check.

2. May Cause Migraine or Headache Attacks

While nutritional yeast is a good source of many vitamins and minerals, including vitamin B-12 and zinc, some yeast products contain tyramine, which can cause migraines in some people.

Tyramine is a tyrosine-derived compound found naturally in nutritional yeast and concentrated yeast products such as Vegemite. Most people can eat foods containing tyramine without experiencing adverse side effects.

However, some research suggests that tyramine may trigger migraine attacks in some people. Migraine is a headache disorder marked by recurrent — and often debilitating — headaches that range from cheval to severe cheval. Tyramine is still being studied to see how it causes migraine attacks.

On the other hand, Tyramine appears to affect the central nervous system, and it secretes various hormones that can raise blood pressure and cause headaches.

3. It Can result in facial flushing

Niacin, also known as vitamin B-3, is essential for many bodily functions, including metabolism and enzyme function. However, excessive niacin consumption can cause facial flushing. It appears as a flush of red on the skin, which may be followed by a burning and itching sensation within 10–20 minutes of ingesting high doses of niacin.

After only a few servings, facial flushing caused by nutritional yeast is unlikely, and it’s more common after taking substantial doses.

Some people may be intolerant to nutritional yeast, which is a rare occurrence. Individuals with inflammatory bowel disease (IBD), such as Crohn’s disease, appear most susceptible. In some people with IBD, yeast can cause an immune response, and according to some studies, it may aggravate symptoms. However, the role of dietary yeast in the development of IBD remains unknown, and there is no substantial evidence that it is the cause of the disease.

Here are just a few of the Many Uses for Nutritional Yeast: 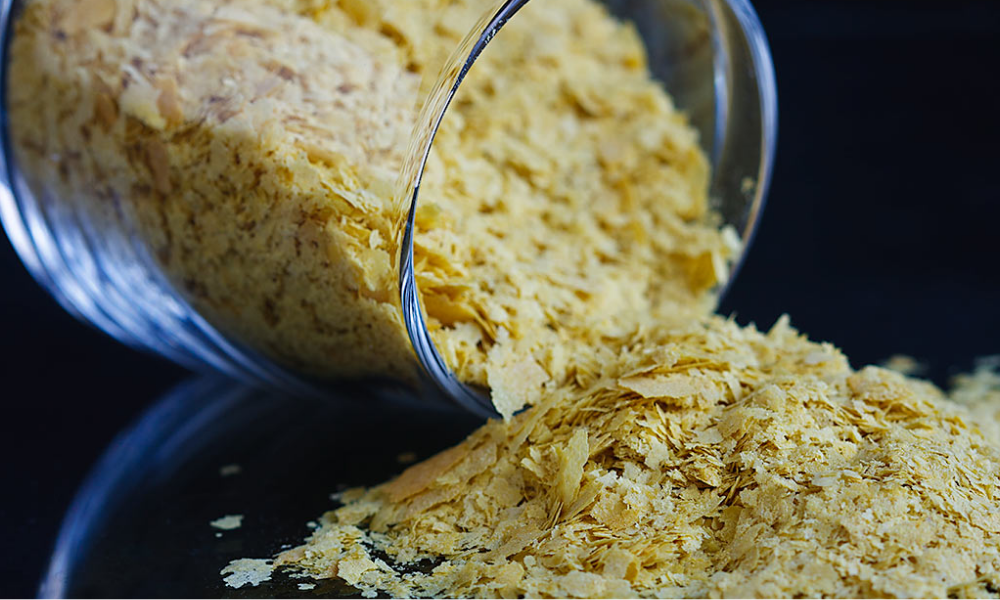 Protein-rich- One tablespoon contains between 2-4 grams of protein, depending on the brand. It’s also a complete protein, containing all nine of the essential amino acids your body requires.

B vitamins abound- This is especially important for vegetarians, as getting B vitamins without taking supplements can be difficult on a plant-based diet. One tablespoon of nutritional yeast contains 30-180 percent of your daily recommended B vitamin intake.

What does nutritional yeast taste like? Its taste is similar to cheese, but it is dead,d it, and stated. It is a deactivated form of fungi that live in molasses. While this substance is not as flavorful as cheese, it does have a nutty flavor. Its texture is similar to parmesan cheese, which makes it a good substitute for those who have dairy-free or lactose-intolerant diets.

What does nutritional yeast taste like? It has a nutty, savory, and umami flavor. Its color is yellow, and it smells like the bulk food section of a health food store. It is also used in vegan and vegetarian recipes to substitute for cheese. Its unique flavor will enhance the taste of any dish. You can find it at health food stores, and most supermarkets carry it.