For many years, soy sauce has been a pantry staple in many households. If you like Asian food, you’ll understand why this pungent seasoning is used in so many Chinese and other Asian dishes.

Dark soy sauce, as the name implies, is a dark-coloured sauce popular in Chinese cuisine. It is sweeter, darker, and thicker in consistency than light soy sauce and is used to add colour and umami flavour to savoury dishes such as noodles and fried rice. This ingredient gives marinades a nice dark, shiny appearance. 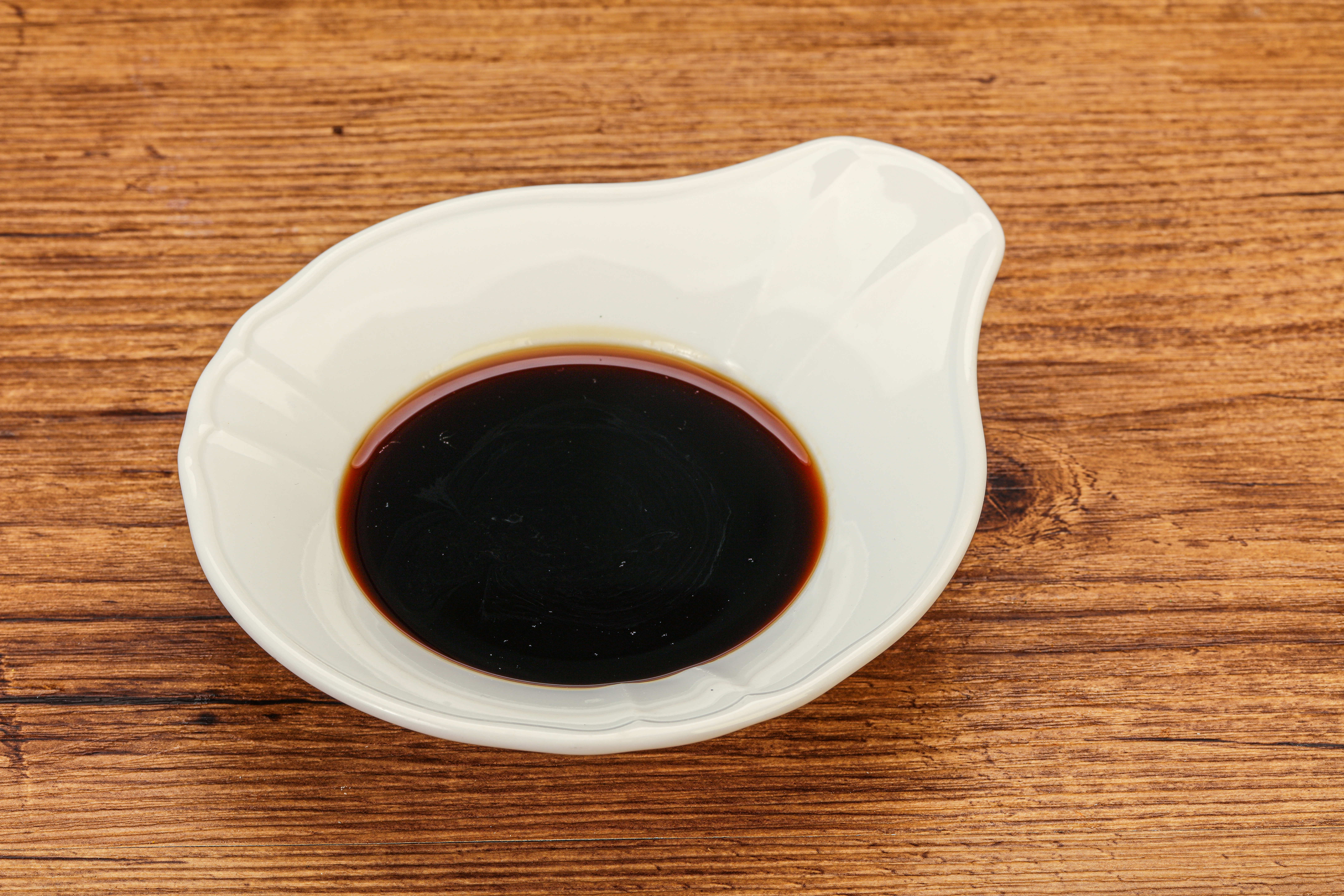 But what if you don’t have this incredible ingredient? What is the best dark soy sauce substitute? Dark soy sauce can be substituted with similar flavoured salty or oriental sauces. If you need an ingredient that tastes as close to dark soy sauce as possible, try light soy sauce, teriyaki sauce, or oyster sauce.

Despite the fact that it is considered a necessity in Asian kitchens, many Western households do not have it in their pantry. If you are unable or unwilling to use dark soy sauce in your next recipe, you will require a substitute. We’ve compiled a list of eight excellent alternatives made with common ingredients. Let’s get started.

Here are the Top Substitutes for Dark Sweet Soy Sauce 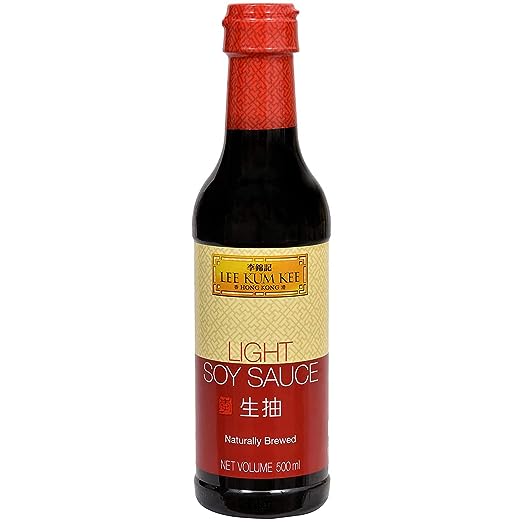 Umami is a flavour profile found in all types of soy sauce. This term is from Japan and is commonly used in Asian cooking.

Umami is best described as something savoury that tastes like rich broths and fermented foods like fish sauce.

If your recipe calls for dark soy sauce, the main goal is most likely to add umami as well as colour to your dish. As a result, a different type of soy sauce, such as light soy sauce, will be the most effective substitute.

Light soy sauce and dark soy sauce can both be used in the same amounts. It will have the same salty, umami flavour. However, because it is not as sweet as dark soy sauce, you may need to adjust other ingredients in your recipe accordingly.

When using light soy sauce, the colour of your dish will not change as much as when using dark soy sauce. So, if you want both the dark colour and the flavour, choose a different substitute. 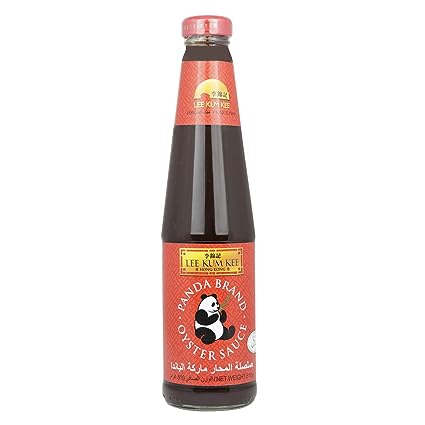 Oyster sauce is made from oyster extract but has no fishy flavour. It’s made with concentrated caramelized oyster juices, salt, and sugar.

Some oyster sauces include soy sauce and maybe thickened with cornstarch.

Oyster sauce has an earthy, sweet, and salty flavour, similar to dark soy sauce. It is also very dark in colour, so it will provide the same delectable caramelization as your recipe requires.

One word of caution when substituting oyster sauce for dark soy sauce: it can be much sweeter in flavour! As a result, you might want to start with half as much to see how sweet it is.

Depending on the brand, it can also be much thicker than dark soy sauce. As a result, you may need to add some water to dilute the oyster sauce and keep it from burning. 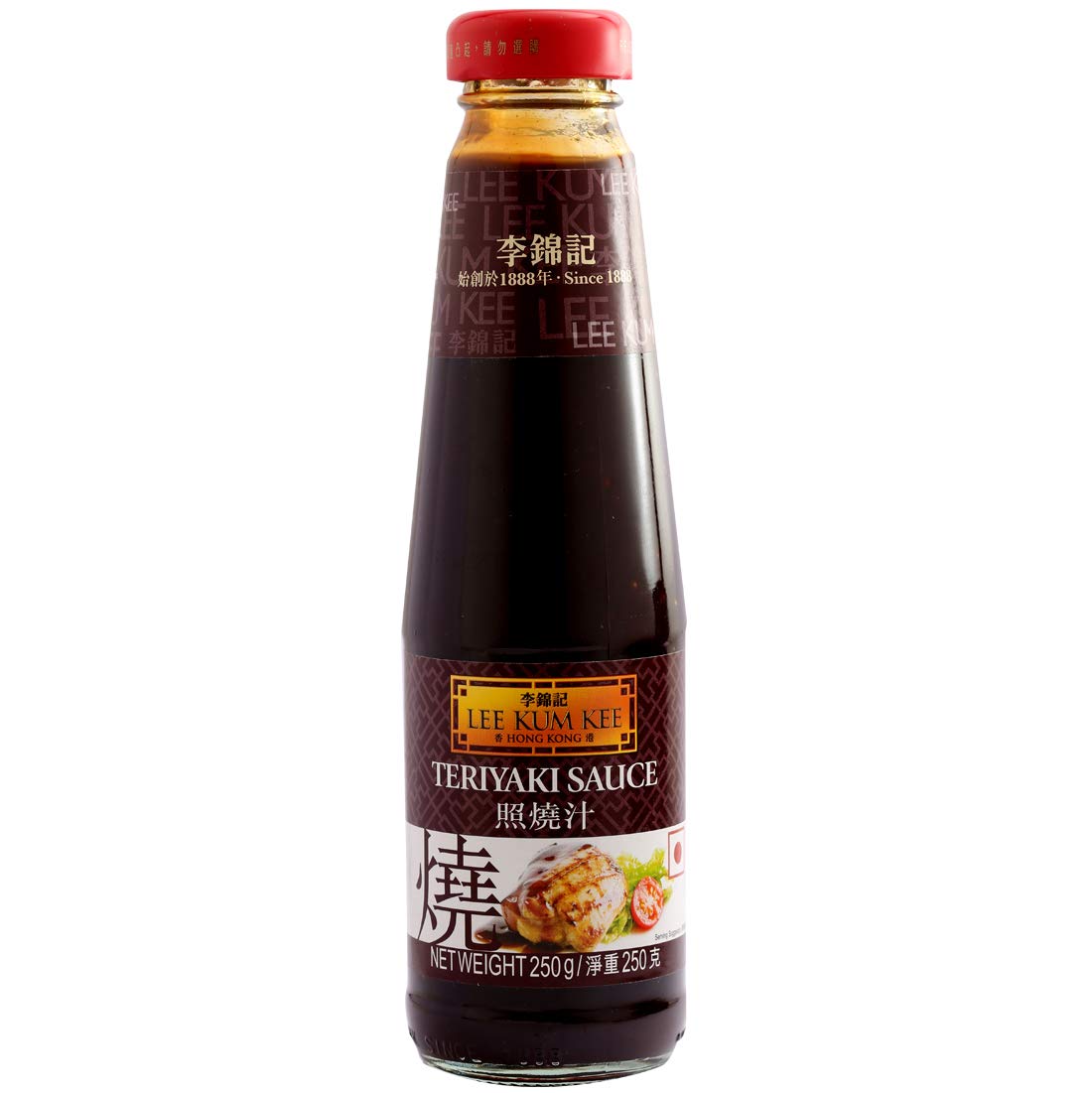 Teriyaki sauce is a flavorful, simple sauce. Soy sauce, sugar, ginger, and either sake or mirin are the main ingredients. Mirin is a lower-alcohol alternative to sake.

Some teriyaki sauces also include garlic flavours. It has the consistency and colour of dark soy sauce.

Teriyaki sauce’s umami, salty, and sweet flavours make it an excellent substitute for dark soy sauce. It is a smooth and glossy sauce that will give your recipe a glossy finish.

When using teriyaki sauce as a substitute, keep in mind that it will contain other ingredients such as ginger and garlic. If your recipe calls for these ingredients, you may want to reduce the amount you use.

If you’re looking for a simple dark soy sauce substitute, a dash of molasses will sometimes suffice.

Molasses is a byproduct of the sugar production process with a rich, bitter-sweet flavour. It’s popular in dishes like barbeque sauce that benefit from its rich sweetness.

The main flavour difference between molasses and dark soy sauce is the absence of salt. As a result, you may need to increase the amount of salt in your recipe to compensate.

Molasses is the same colour as dark soy sauce but has a thicker consistency. Because this syrupy sauce can easily burn, it should not be added to dishes until they are almost ready to serve.

Hoisin sauce is a flavorful sauce that is frequently used to glaze meat or to add richness to stir-fries. It also works well as a dipping sauce.

Fermented soybean paste, fennel, chilli, and garlic are the main ingredients in hoisin sauce. Vinegar, sugar, and Chinese five-spice powder are also included in some brands.

Hoisin sauce has a sweet, umami, and salty flavour profile, similar to dark soy sauce. It has the same colour as dark soy sauce and will darken your recipe in the same way.

However, keep in mind that hoisin sauce contains some elements that dark soy sauce does not.

Examine your recipe carefully and adjust any spices as needed. Flavours like fennel or Chinese five-spice clash may not work well with your recipe. 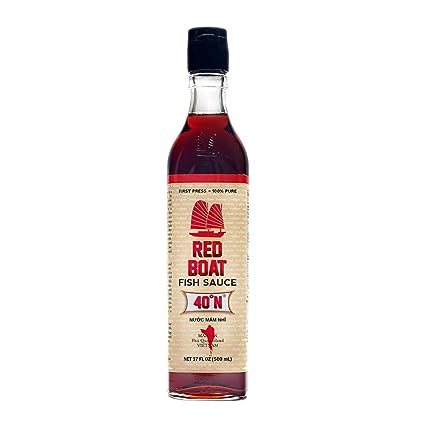 One of the most common ingredients used to add umami to Asian cooking is fish sauce. This sauce, which is made by fermenting fish in salt for up to two years, has a punchy and strong flavour that is similar to dark soy sauce in many ways.

This can be an excellent substitute for dark soy sauce, especially in seafood and fish dishes. The fish flavour, however, may overpower other meats and poultry, so it is best avoided for these.

Fish sauce can be used in vegetable dishes, but make sure there are no vegetarians in the house!

The flavour of fish sauce is strong and intense, and it is very salty. We recommend starting with half of the amount in your recipe and adjusting to taste.

Worcestershire sauce, which originated in the United Kingdom, is a rich and flavorful sauce that the British adore!

Despite its origins on the other side of the globe, Worcestershire sauce shares many similarities with its Asian counterparts.

It also contains mustard seeds, coriander, cloves, citrus peel, and pepper, among other spices and seasonings.

Worcestershire sauce has a savoury, tangy, and salty flavour. Because it is not as sweet as dark soy sauce, you may need to add a sweetener like sugar or honey.

Worcestershire sauce is also very strong, so use half as much as dark soy sauce. It has a thin and watery texture, making it unsuitable for making sticky, caramelized glazes.

Tamari is the Japanese word for soy sauce. It’s made in the same way, but it’s wheat-free and gluten-free. It has a flavour and colour that is somewhere between light and dark soy sauce.

Although the colour is slightly lighter, your dish will still darken and caramelize.

Balsamic vinegar as a dark soy sauce substitute is a last resort, but with a little ingenuity, you can make it work!

Balsamic vinegar is a traditional Italian condiment made by concentrating and fermenting freshly harvested grape juice.

Because balsamic vinegar has a strong and intense flavour, a small amount will suffice to add colour and depth of flavour to your dish. It has a sweet and sour flavour, but it is very acidic, so some sugar will be needed to balance it out.

Because of the concentrated nature of this condiment, it’s a good idea to dilute it with water before using it in a recipe. 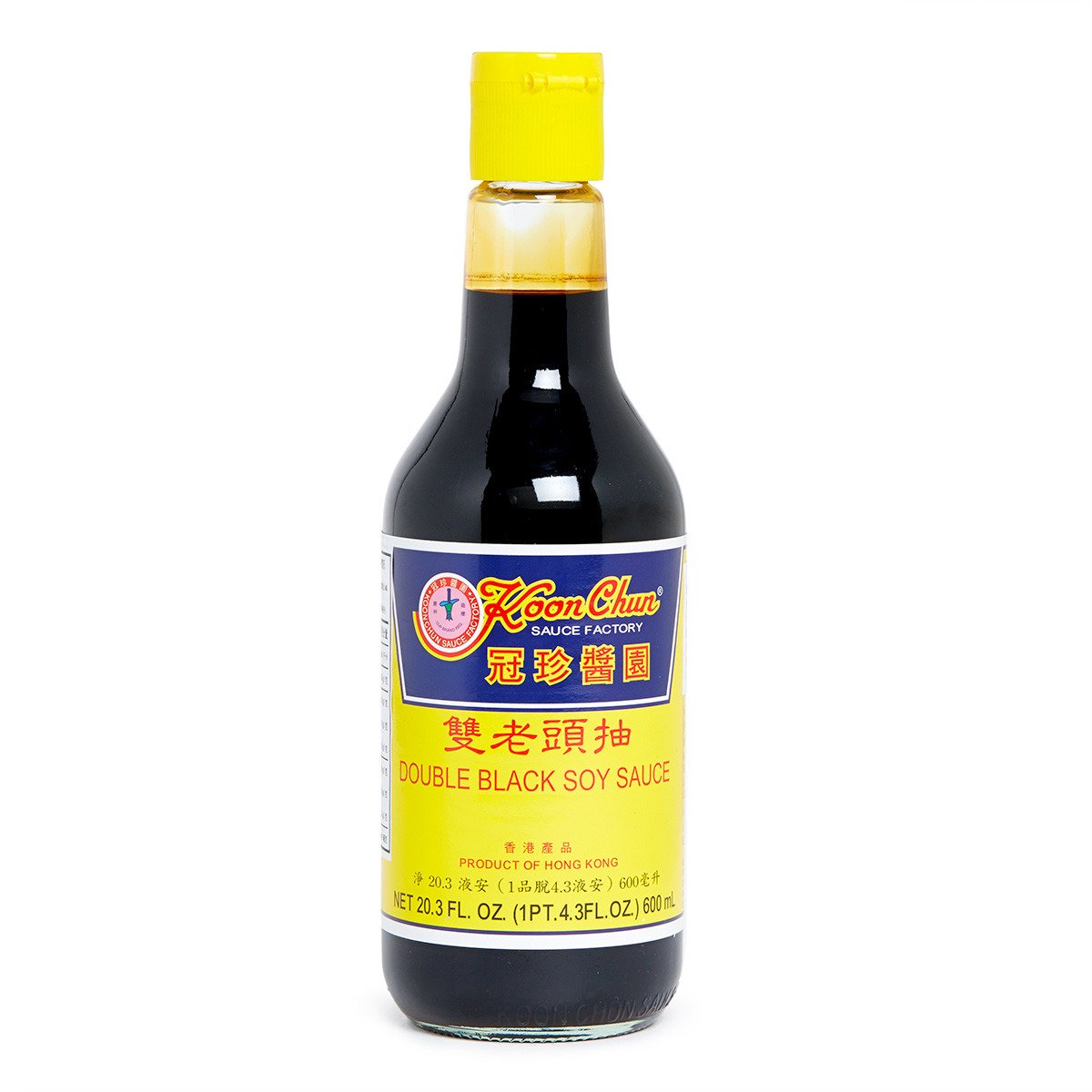 If you like the flavour and texture of dark soy sauce but don’t have any on hand, the double black sauce is a good substitute. It’s a dark soy sauce, but it’s sweeter, darker, and thicker because of the extra molasses.

Use this substitute sauce sparingly because its added sweetness may throw the dish off balance.

Double dark soy sauce could be higher on this list of substitutes, but many western kitchens don’t have it, so we included it further down. 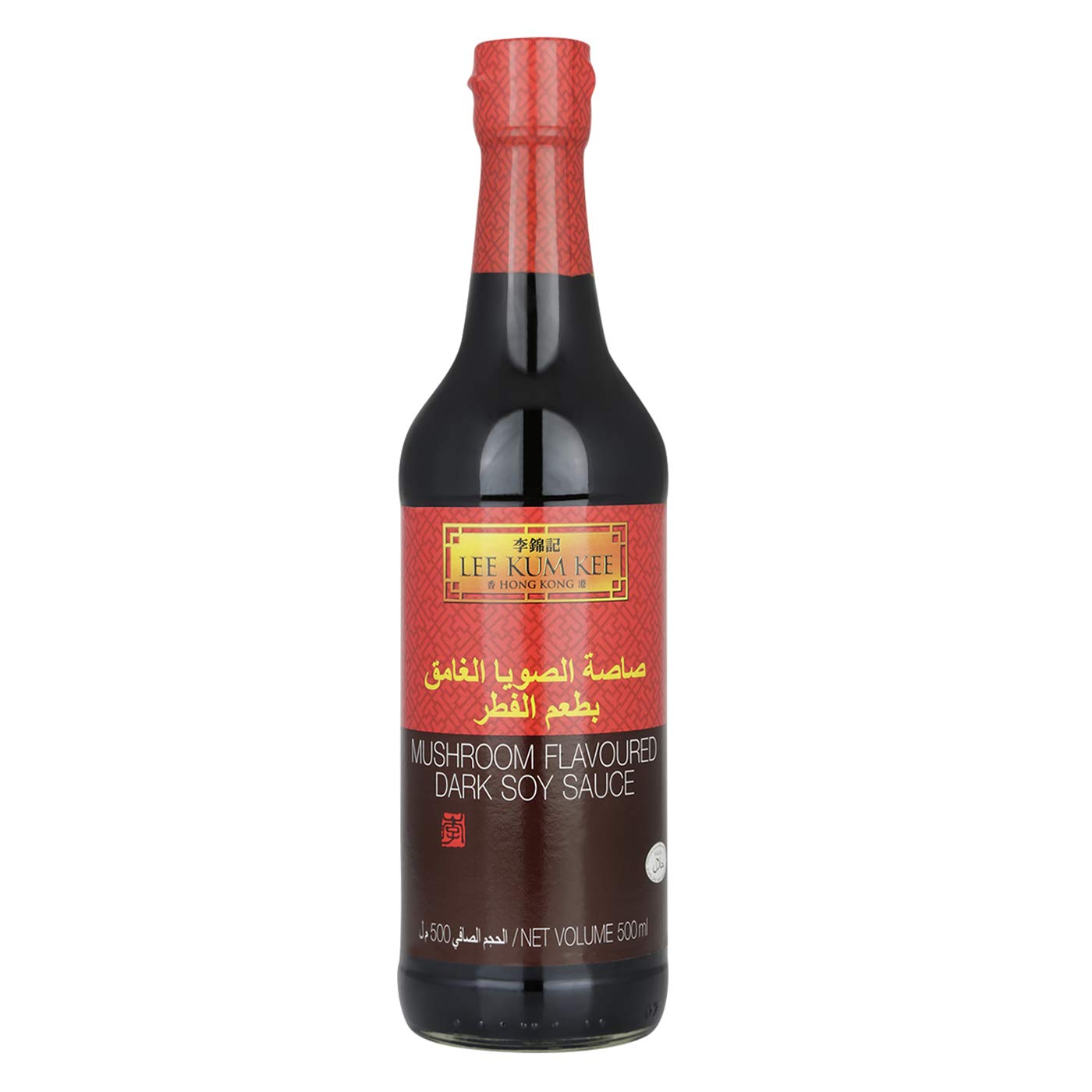 As you might expect, mushroom flavoured dark soy will impart the flavour of mushrooms to food. If you don’ mind giving your meal a unique flavour, this is a great option. It has the texture and colour of dark soy and can be used in any savoury dish you can think of.

Is it Possible to Make Dark Soy Sauce at Home?

You might be wondering if you can make dark soy sauce at home. Making any type of soy sauce from scratch is difficult, but we can cheat when it comes to making dark soy sauce!

What are Some Recipes Where we can Use Dark Sweet Soy Sauce?

Here we’ve mentioned some recipes, so take a look!

This vegetable-packed chicken and rice dish gets an acidic, sweet, and umami boost from a simple orange-soy sauce.

The glossy sauce on this pork steak dinner is made from a soy-and-balsamic glaze combined with pineapple.

For added flavour and crunch, these sweet and sour chicken kebabs are topped with a sesame-citrus sprinkle.

This vegetarian version of the classic appetizer packs so much savoury flavour with soy sauce, smoked paprika, and smoked almonds that no one will miss the traditional bacon. If you prefer a milder blue cheese flavour, use Gorgonzola dolce.

How is Light Soy Sauce Made from Dark Soy Sauce?

The good news is that light and dark soy sauces are nearly identical. Many recipes call for both types, as they add slightly different flavours to your dish.

If you only have one of these ingredients, your recipe should still be delicious.

To lighten the flavour of dark soy sauce, add a splash of water and a pinch of salt.

Because soy sauce is consumed in such small quantities, any health benefits or side effects on our bodies are likely to be negligible. Should you be concerned about how much soy sauce you use if you like it?

According to research, soy sauce is high in antioxidants, which may protect cells from free radical damage. Soy also contains isoflavones, which have been shown to lower cholesterol and alleviate menopausal symptoms.

However, the health benefits of soy sauce may be outweighed by the unhealthy drawbacks.

Soy sauce contains so much salt that 1 tablespoon contains up to 40% of our daily sodium intake. High salt intake may raise blood pressure, increasing the risk of heart disease and stroke.

Soy Sauce Contains How Many Calories?

If you’re trying to stick to a low-calorie diet, you might be wondering how many calories are in soy sauce. This rich and flavorful condiment is low in calories, with only 53 calories per 100 grammes.

Because soy sauce is used in such small amounts, even a small amount goes a long way. Most recipes call for about a tablespoon of soy sauce, which has only 8 calories.

This means you can use as much soy sauce as you want without worrying about it overpowering your dish.

What is the Distinction Between Dark and Light Soy Sauce?

Light soy sauce, teriyaki sauce, or oyster sauce are the best replacements for dark soy sauce in cooking. If you have the time, you could make your own dark soy – it’s a quick and easy substitute.

Remember that dark soy sauce is mostly used to colour your food. It is perfectly acceptable to leave it out of recipes.