Reblochon cheese is quite popular amongst chefs and cooks in different parts. This is a soft, unpasteurized cow’s milk cheese from France with a yellow-washed rind and a delicate flavor. The cheese becomes bitter when it grows overripe.

This cheese goes well with a fruity Cabernet or a Savoie wine. And you can serve it with slices of fresh pear. Read on as you learn more about reblochon cheese and its application in today’s cuisines.

However, it may not always be readily available around you. I have highlighted some excellent reblochon cheese substitutes for when you are in a pinch, and your recipe calls for reblochon cheese. 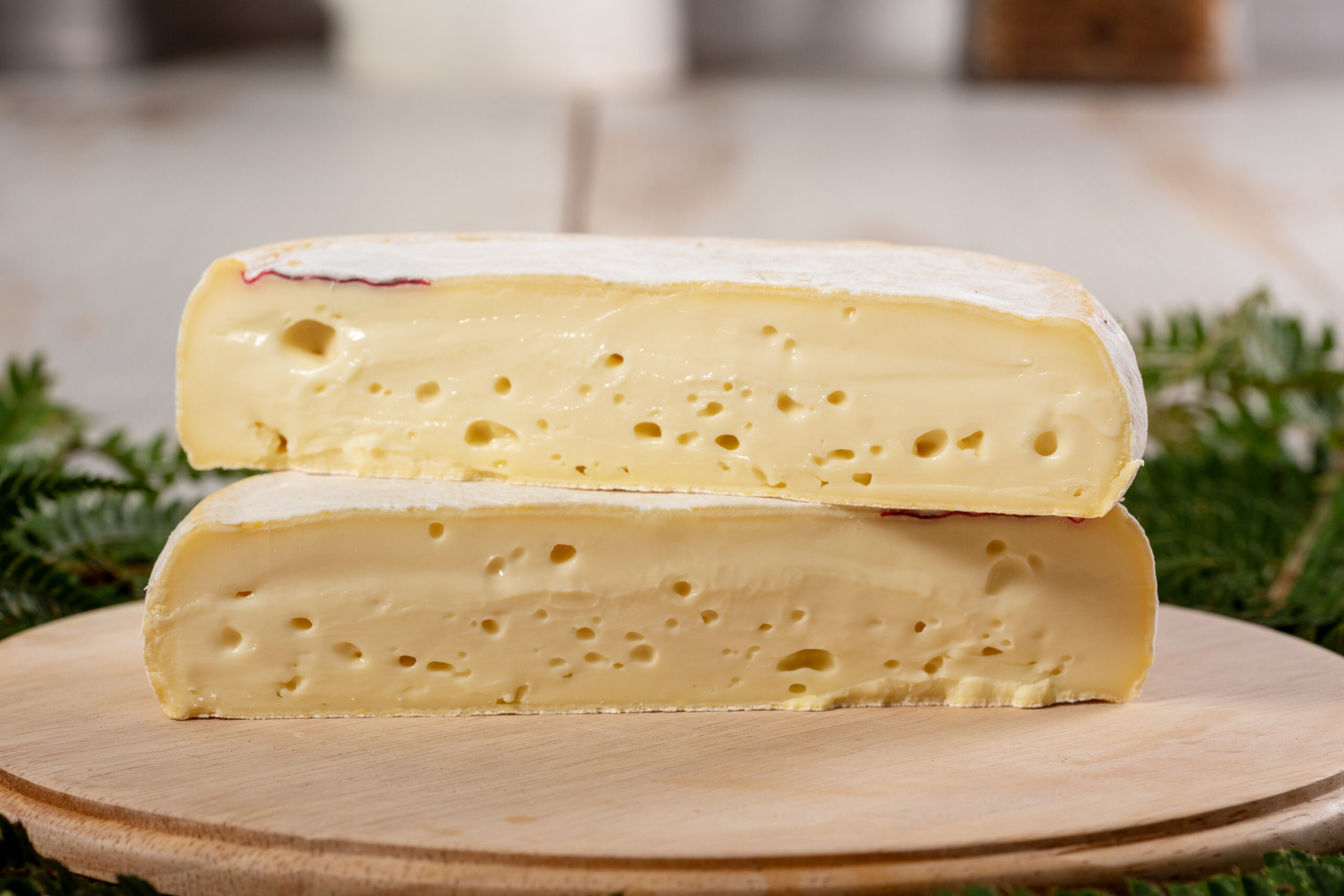 What Is Reblochon Cheese

Reblochon is a smear-ripened soft washed-rind cheese prepared traditionally from raw cow’s milk. The Abondance, Tarentaise, and Montbéliarde cow breeds are the finest for generating the milk needed for this cheese.

This cheese has a soft center and a washed rind, and it weighs about 450 grams on average (16 oz). The rind of this cheese is covered with a beautiful white mold, indicating that it has been well-aged in an airy cellar.

Reblochon is a mellow, milky cheese with a pinkish-brown rind and a pliable, creamy texture. The word ‘reblochon’ comes from the French word ‘blocker,’ which means ‘to squeeze a cow’s udder again.’

This cheese is best enjoyed between May and September when cured for six to eight weeks. From March to December, it’s also fantastic.

Reblochon has a faint cellar aroma and a gentle fruity flavor with a strong nutty finish. It pairs well with a glass of Savoie wine because of its delicate and subtle flavors. Reblochon has a nutty flavor that lingers in the mouth after you’ve eaten its soft, homogeneous center.

Reblochon cheese is delicious cheese and can be melted atop baked potatoes or on a cheeseboard amongst other dishes. See some interesting dishes and recipes you can utilize reblochon cheese in:

Reblochon cheese is known to give this delectable nutty flavor to dishes it is used in. However, you may need to consider similarly characterized cheeses that can easily be a reblochon cheese substitute in your recipes.

See some alternatives you can use in place of reblochon cheese: 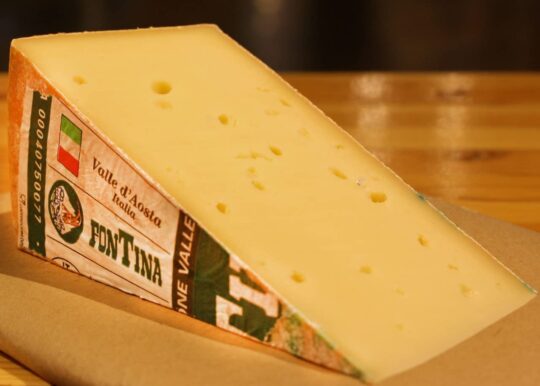 The key qualities of Reblochon’s cheese are its nutty flavor and creamy texture. Fontina is a washed-rind cow’s cheese similar to both, although Fontina comes from Italy, not France.

Fontina’s flavor is modest but distinctly nutty and savory. Swedish, Danish, and American Fontina have a milder flavor, softer texture, and more holes than Italian Fontina.

The flavor profile of Fontina is similar to that of the French delicacy, but it is significantly milder. Fontina, like Reblochon cheese, has a strong, powerful scent that some people find unpleasant and off-putting.

Despite its toughness, Fontina melts easily, making it an extremely versatile cheese. Fondue and all varieties of sauces love the somewhat gritty gooey texture. 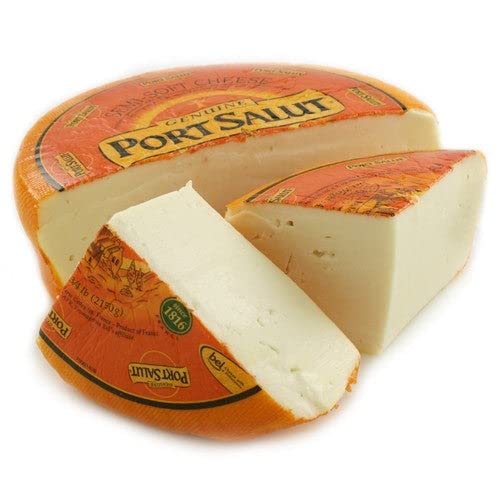 After an extra-long curing period, Port Salut cheese is super-soft and creamy, thanks to skimmed milk. Another cheese is called after its place of origin, Port Salut in France’s Pays de la Loire.

The aromas and textures of Reblochon and Port Salut cheeses are very similar, but most people would never distinguish the difference based on flavor alone.

Port Salut is a semisoft cheese, unlike the previous Reblochon options. It’s a tad milder and smoother, with a velvety texture to reward you. It’s less expensive than Reblochon and Gruyere, but it doesn’t melt as well.

Port Salut has a mild flavor, but it might have a strong odor because it is a mature cheese. The fragrance of the cheese grows stronger over time, although this does not affect its flavor. It can be kept refrigerated for up to two weeks after opening. 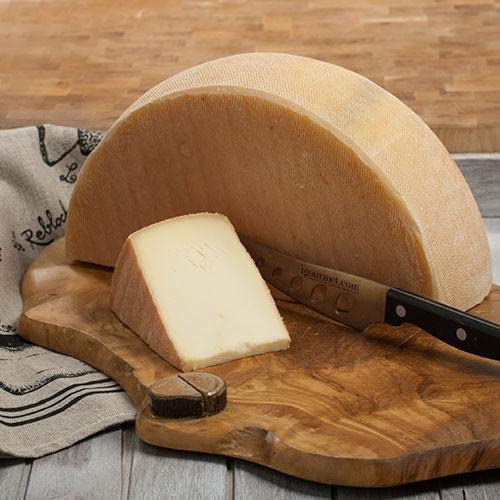 You will only find it in specialized stores and grocers with a large imported (European) cheese selection because it’s one of the most exclusive Alpine cow’s milk cheeses available.

Raclette is a nutty, creamy cheese with notes of spice and a fruity aftertaste that might take some getting used to. It’s a touch milder than regular Swiss cheese, making it an excellent Reblochon replacement.

Raclette is a buttery, smooth cheese that is perfect for melting. The fat content does not separate and causes greasiness, unlike many other high-fat kinds of cheese. As a result, the flavor is rich and versatile, making it suitable for any dish requiring melted cheese.

Raclette is great for fondue, bakes like macaroni and cheese, soups, sauces, and dips, but we wouldn’t recommend it without melting.

Is Reblochon similar to Camembert?

Camembert is a pale yellow cheese with a buttery, creamy flavor. It has a texture similar to condensed milk, making it easy to enjoy. Reblochon, on the other hand, has a mushroomy, herbal flavor. The flavor would linger in the mouth for a long time.

Is Reblochon available in the United States?

Reblochon has been unavailable in the United States since 2004 because it is unpasteurized and has not been aged enough to comply with US import standards governing the pasteurization of soft and semisoft cheeses.

Is it possible to freeze Reblochon?

Reblochon cheese freezes nicely, so wrap the tartiflette in plastic wrap and place it in an airtight container before freezing. The recipe will keep for about a month in the freezer. Before baking, make sure everything is completely defrosted.

It may be difficult to pick a winner among the great range of cheeses available. If you ask me to pick my preferred cheese, I will have to choose Fontina.

The ideal reblochon cheese substitutes served cold and sliced is entirely a question of taste, and the amount of flavor required will be determined by whatever you’re cooking. So take your time with that dish and pick one of these seven Reblochon cheese replacements to ensure that your dish is always a hit.