If you wonder what an Old Fashioned tastes like, you’ve come to the right place. This famous cocktail was first published in 1806 by James E. Pepper, a bartender from Louisville, Kentucky. Over the next few decades, the drink received many published recipes. In 1895, G. Kappeler published a book titled Modern American Drinks.

Traditionally, an Old Fashioned was made with rye whiskey, but the variety of good ryes diminished as the 20th century passed, and bourbon became the preferred spirit. It remains a popular drink, and the bourbon industry continues to grow. Still, the new rogue rye market offers a unique opportunity to taste an Old Fashioned as it was meant to be enjoyed. In addition to being a classic drink, an original Old Fashioned is an excellent venue for trying out a new brand of whiskey.

What is Old Fashioned?

The first Old Fashioned was made with sugar cubes, bitters, whiskey, and ice in the late 1800s. It was simple and minimal, and everyone enjoyed it. The Old Fashioned is one of the most sophisticated cocktails, and it is associated with the jazz era of the 1920s.

The Old Fashioned is a cocktail made by mingling sugar with bitters, adding whiskey or brandy and a citrus rind twist. It’s traditionally served in an Old Fashioned glass, a short, round, 8–12 US fl oz (240–350 ml) tumbler-like glass named after the drink.

The name is derived from the method of preparation. As new whiskey cocktails were created, those who refused to change with the times asked for their drinks to be made the old-fashioned way, and thus this cocktail was born.

To make an Old Fashioned, put a lump of sugar in a whiskey glass and dissolve it in a dash of water. Then two dashes of bitters and a lump of ice would be added. The customer is then given a bottle of bourbon and instructed to pour their own drink. It’s no surprise it was so popular!

The sugar and bitters, among the other ingredients, add flavor. The sugar sweetens the drink, while the bitters keep it from becoming too sweet and add a hint of spice with clove and cinnamon flavors.

The drink is diluted, and the whiskey flavor is softened as the ice melts in an Old Fashioned.

Similarities between the Old Fashioned and the Manhattan

First. Both use whiskey as a base ingredient, and the preferred base spirit is a point of contention among experts and enthusiasts. You already know how I’ll respond: customize the cocktail to your preferences.

Both Old Fashioneds and Manhattans can be made with bourbon or rye whiskey (or any whiskey, really; there’s some debate about which whiskey was used in the first versions).

Bitters are also needed to balance out the flavors in each cocktail. Traditional bitters (Angostura) are used again, but I prefer to use bitters that bring out flavors and aromas that aren’t as prominent at first sip. Depending on the flavors of the whiskey and the sweet elements, mixologists will frequently switch out the bitters.

Additionally, each of the cocktails contains a sweet component. Simple syrup or a sugar cube is used in the Old Fashioned, and sweet vermouth is used in Manhattan. Vermouth is an aromatized fortified wine with a touch of spirit, and some botanicals added to round out the flavors.

What’s the Difference Between a Manhattan and an Old Fashioned in terms of Flavor?

Both cocktails are considered spirit-forward, which means that the leading spirit used to make them will be the driving flavor profile, and it will be whiskey in this case.

Both use bitters, so the main difference is the third ingredient, which is either sugar in the Old Fashioned or vermouth in Manhattan.

While sweet vermouth, the red vermouth commonly used in Manhattan cocktails, is very sweet, it’s also very aromatic thanks to infused botanicals. It’s slightly sour because it’s made with wine. Because a Manhattan isn’t served on the rocks, it doesn’t soften or sweeten over time like an Old Fashioned does.

Furthermore, because the Old Fashioned is served on the rocks, it continues to dilute and change as the ice melts.

There are many classic Manhattan variations. Looking through a list of 8 Variations on a Classic Manhattan will give you more information on some great alternatives if a traditional Manhattan isn’t your style.

What are the Ingredients used to Make Old Fashioned?

The essential ingredients of an Old Fashioned are whiskey, gin, and orange juice. The liquor is usually mixed with ice and served over ice. The ice will help the Old Fashioned develop over time. It will start out with a robust taste, but it will become smooth and have a delicate balance of flavors as it sits. It is a drink that should be served in a glass.

The ice used to make an Old Fashioned cocktail is the key to its flavor. It is essential to choose quality ice because this will affect the flavor. An alcoholic beverage should be made with quality ingredients, and a good ice machine will make a perfectly-chilled ice cube. Afterward, you should stir the icy drink until it is thoroughly chilled. If you want a smooth and delicious drink, you can choose a good-quality ice maker to create your drink.

Which Spirit Tastes best when Making an Old Fashioned?

Scotch is smoky and spicy

Scotch gets its warm, campfire flavor from grains heated over an open fire. The classic flavor of Johnnie Walker Red Label Scotch and Monkey Shoulder is one of our favorites (plus, the $25-$30 range is fantastic value!). Try Aberlour A’bunadh Single Malt Scotch, which took home the “Best Distillers Single Malt Scotch” award at the 2020 San Francisco World Spirits Competition.

(And, p.s., scotch is spelled “whisky” (no ‘e’) because it must be bottled in Scotland to retain its name.)

Rye will give you a peppery bite if you want a little more of a kick. The higher the rye content in the bottle, the more spicy the rye will be. High West Rye is our go-to splurge, and Bulleit Rye is a more affordable option.

Bourbon is mellow and sweet, with a broader range of flavors.

Bourbon is made from corn, which gives it a softer taste. We love this Hudson Baby Bourbon from New York, or we’d go with Bulleit’s Bourbon for a more affordable option.

Rum or Mezcal for an Old Fashioned with a Twist?

Rum is grassy and sweet

If you want something a little sweeter, rum is an excellent base for an Old Fashioned, but be careful not to use it too sweet. We recommend using 1 ounce of white rum and 1 ounce of aged rum to allow the bitters to shine through. This combination will nicely counteract the sweetness. 896 Aged Rum and George Ocean White Rum are two of our favorites.

Mezcal is a smoky, earthy spirit

If you want something a little smokier than scotch, mezcal is a great way to kick your Old Fashioned. We recommend mixing 1.5 ounces of mezcal with 0.5 ounces of tequila reposado to balance the smokiness. Casamigos is a great option, and the sleek black bottle will look great on your bar cart!

Whatever spirit you choose, make sure it has high proof because the ice will dilute your drink. Adding one large ice cube, cube, or sphere to your drink will slow the dilution and make it look more professional. 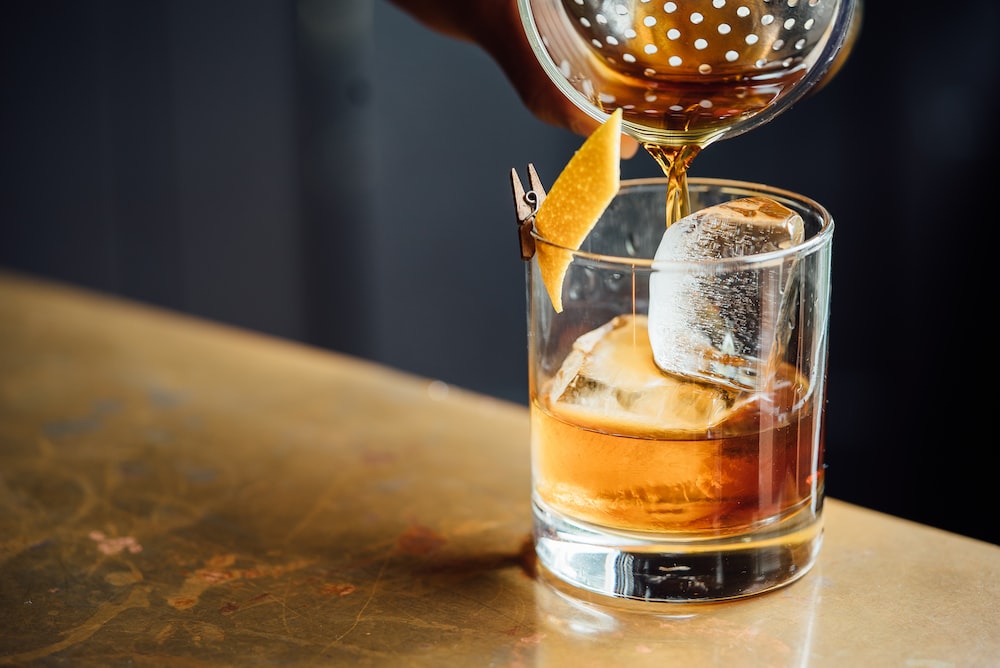 How to Serve Old Fashioned?

As with many classic cocktails, the best Old Fashioned is made with simple, high-quality ingredients. The drink’s original ingredients are bourbon, ice, and sugar, and the sour taste of bourbon should come through. It’s best to choose a bourbon with a high rye content and an orange slice. The ice should be fresh, and the ice should be clean.

The drink is traditionally made with a bourbon base and was traditionally topped with a cherry or orange slice. The drink can be poured over ice and often comes with an orange slice. The drink is then topped with club soda or maraschino cherry. Its ingredients are typically watered down with one teaspoon of sugar and stirred until it dissolves. The classic Old Fashioned is a cocktail that will suit everyone’s tastes and preferences.

The original Old Fashioned was a drink that had a lot of ingredients. In addition to the bourbon, the other ingredients are also crucial for the drink to have a nice flavor. You should avoid adding sugar to your drink to make it more flavorful. A with too much sugar can be overpowering, so it is best to stick to a simple mix. It’s best to use a combination of bourbon and lime for the best taste.

Old Fashioned drinks are not the most complex cocktail to make, but it is a great drink to sip. Its flavors are meant to be highlighted by the whiskey, so an Old Fashioned should be as simple as possible to make. A traditional version of the drink usually includes an orange slice, a club soda, and a maraschino cherry, but you can make a drink that suits your tastes.