You’ve probably been fascinated by the history and preparation of dulce de leche if you’ve ever wondered what it tastes like. To begin with, you might be surprised to realize how adaptable this sweet spread is. It can be served as a pudding, ice cream topping, or filling for pastries. Dulce de leche has a similar flavor to caramel but is not identical. While it’s sweet, it has a milky flavor that may appear faint at first. This is because it has a thicker consistency and does not require any sugar to be melted. Unlike caramel sauce, dulce de lache is significantly simpler to create, and there’s no need to worry about sugar melting!

This may seem like a bit of detail, but it gives dulce de leche a sweet and mellow toffee or butterscotch flavor without the harshness of caramel (i.e., burned sugar). It’s usually created by boiling milk and sugar in a saucepan for hours, stirring continually. Sweetened condensed milk is simmered in water until it achieves the right color for dulce de leche. Some brands, however, use corn syrup instead of sugar, so be sure to read the label carefully. Simply insert a canned can of sweetened condensed milk into a pan of simmering water to make dulce de leche from scratch. Depending on the color you want, cook the mixture for a few minutes.

What is Dulce De Leche?

The sweet-toothed among us have known about this gastronomic find for quite some time. Dulce de leche, a creamy, spreadable sweet deliciousness from South America, swirls into ice creams, sandwiches, and cookies and spreads quickly into scones.

Dulce de leche is a creamy, sweet sauce often known as Mexican caramel. While it appears to be caramel, it is made from the Maillard browning of dairy rather than sugar caramelization. This may seem like a bit of detail, but it gives dulce de leche a sweet and mellow toffee or butterscotch flavor without the harshness of caramel (i.e., burned sugar).

It’s usually created by boiling milk and sugar in a saucepan for hours, stirring continually. You could do that, or you could skip the stirring and simply cook an unopened can of sweetened condensed milk in a pot of water. This rich and creamy sauce is made with minimal effort. Dulce de leche is excellent straight out of the can (spoon optional), but it may also be served over ice cream (or even in ice cream if you’re preparing it yourself) or used as a filling for cakes brownies, or cookies after cooked and chilled.

The flavor of dulce de leche is a combination of toffee and brown butter, and it has the consistency and color of butterscotch, which is a nutty brown color.

Because of its nutty and rich flavor, dulce is a versatile dessert that may be used in various ways. The milk candy plays a signature role in a variety of sweet treats, including alfajores (a popular treat in Chile, Argentina, and Peru, which features dulce de leche sandwiched between two soft cookies or shortbreads), brownies or cupcakes, and mamoncillo candy from Mexico, which is a dulce de leche fudge.

While dulce de leche is frequently compared to caramel, it has its own distinct flavor character formed by the Maillard reaction, a chemical reaction, and transformation of sugars and proteins that occurs when heat is applied. When you produce dulce de leche, caramelization does not truly take place.

How do you Make Dulce De Leche?

Making dulce de leche isn’t tricky. Making it requires a pot of patience, some strong arms, and simmering the ingredients for about an hour while constantly stirring the mixture. If you have these things, you can create them. Use a can of sweetened condensed milk instead of making the recipe from scratch to save time.

4 Ways to Use and Make Dulce De Leche

There is a method for making dulce de leche that results in a delicious product, and the best thing is that it requires just one component. Look at this simple recipe, and give it a shot sometime soon! 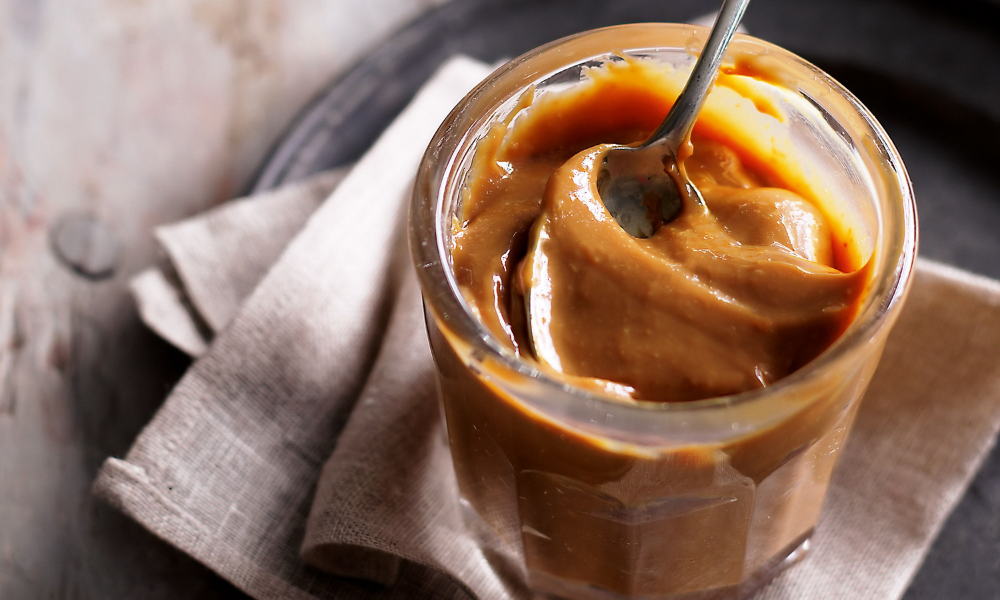 The response to that question is quite simple. As is common knowledge, caramel is composed of nothing more than sugar and water. On the other hand, dulce de leche comprises milk and sugar, just as the name suggests (assuming you’ve reviewed your Spanish skills recently).

It is known by various names in different countries, including manjar and manjar Blanco in Uruguay, Argentina, Chile, and Peru, and arequipe in Colombia. Sugar and milk are the two main components of this dish. However, you can save the preparation time by using sweetened condensed milk instead of sugar and milk. Using goat’s milk instead of cow’s milk, dulce de leche is transformed into a camera.

Although dulce de leche and regular caramel may have flavor characteristics and textures that are comparable to one another, caramel is produced by browning sugar. Browning the milk is the first step in making dulce de leche (with a bit of sugar mixed in).

Is Dulce De Leche and Condensed Milk the Same Thing?

What is the Dulce De Leche Equivalent?

This expression originates from Spanish and translates literally to “sweet milk” or “candy of milk.” In all honesty, that is a very accurate description of what it is: a jam created from sweetened condensed milk. It’s comparable to caramel sauce. However, the preparation is less complicated. Dulce de leche can be found worldwide, although it is notably popular in Latin American countries.

How Long can you Keep Homemade Dulce De Leche?

If you do not have an urgent purpose for the dulce de leche that you have created, or if you happen to have leftovers, you will want to store the remaining amount in the refrigerator in an airtight container. If stored correctly, it will remain edible for one month; however, there is no chance that it will last that long in my home because it is guaranteed to be consumed much before then!

Dulce de leche is a sauce typically referred to as Mexican caramel. It is sweet and creamy. The browning of dairy is the foundation of the method used to make dulce de leche, a technique distinct from the caramelization of sugar. When preparing the sauce, it is essential to keep in mind that it also possesses a bitter taste despite its sweetness. It is in your best interest to read the labels and nutrient information provided on the items you use.

Dulce de leche is usually produced by boiling sweetened condensed milk and sugar until thick and syrupy. You may, however, easily make the sauce at home by using a can of sweetened condensed milk, which is readily available these days. For the sauce, you’ll need a few simple ingredients and a small saucepan. Use a food processor to get the most satisfactory results possible. When making dulce de leche, it is recommended that the can be kept covered for the entirety of the preparation procedure.