The first thing you should know about grouper is that it tastes great! The white meat will be opaque when cooked and flaky when you cut it with a fork. A few things about grouper’s flavor: Grouper has a mild flavor, usually compared to halibut and seabass fillets. Compared to other types of fish, the taste of grouper is not very strong, so it will be a good choice for beginners. However, if you’ve never tried it, you should consider the following tips to enjoy the delicious taste of this beautiful fish. 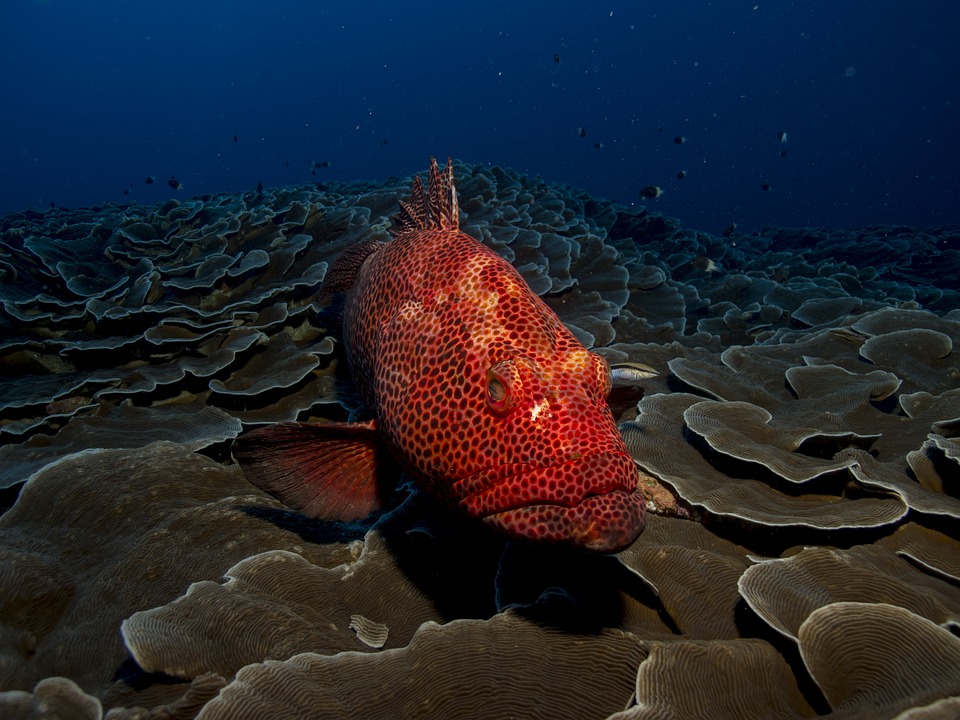 When cooking grouper, choose the correct preparation method. It doesn’t have to be a delicate dish; it should be moist and flaky. Cooking it in olive oil is recommended to tenderize the fish faster. It can also be eaten raw, making it an excellent option for sushi. Be sure to check the nutritional facts and the fish’s quality before eating it. It is recommended that you use olive oil for cooking and avoid using too much salt as it is a good source of zinc.

Any fish belonging to the Serranidae family is known as a grouper.
Other fishes in the Mycteroperca and Epinephelus genera are also included. They are a culinary delight with over 400 species of grouper in the salt waters. The most common groupers on the menu are red and black grouper.

Because grouper is a bottom-dwelling fish, spotting and catching them can be difficult. Although most groupers can grow to enormous sizes, the Atlantic goliath grouper takes the cake. The grouper’s stout body, on the other hand, means it isn’t a great swimmer.

Grouper is a delectable fish that frequently competes for the best-tasting fish in the world. Simply put, the grouper has a mild flavor. Like monkfish or flounder, a Freshly caught grouper has a slight sweetness. However, if the fish is not remarkably fresh, this sweet flavor may not be present.

Red and black grouper, despite their names, turn white when cooked. The flesh is firm, similar to that of red snapper or rockfish. Furthermore, the flakiness of the flesh does not detract from the fish’s juiciness. Compared to other larger species, grouper has a significantly higher moisture content.

If you’re curious about the taste of grouper, you can try it in a restaurant by asking a local. It will be a mild, oily fish with a slightly sweet undertone, and its oil and moisture content will make it moist and tender. The meat of the grouper will be opaque when cooked, and once cooked, it will have a firm texture. As a result, it has a milder flavor than cod.

There are many species of grouper in the sea. But in Florida, the most popular ones are Gag, Red, and Black Grouper. Although these fishes are all edible, they are not the best choice for sushi. The texture of the grouper is unique, and it is very versatile. Moreover, if you are looking for a fish suitable for sushi, you can try the different kinds of sushi available in the market.

The most common grouper is the gag grouper, found in the Atlantic Ocean. It’s brown, and it likes to hang out in shallow water, especially around underwater wrecks and coastal rock piles.

It is the most commonly caught fish from the beach because it prefers to hang out in coastal rock beds, where most of its prey can be found.
Trolling close to where the fish is most likely to be found is one of the best ways to catch gag grouper.

Then there’s the black grouper, which looks like the red grouper. The only difference is that, as the name implies, they are black or grey in color.

The red grouper is another common species found in the Atlantic, and it gets its name from its bright red color.

It prefers to stay more profound in the water, so using grouper bait or chum from your boat is the most effective way to catch it. Make sure you’re using a weighted setup to get as close to the fish as possible.

The goliath grouper is the largest species of grouper in the world, which explains its name. They’re so popular in commercial fishing, and they usually live deep in the ocean.

As a result of overfishing, the goliath grouper is on the endangered species list, so you’ll probably have to release it after catching it.

How to Consume Grouper?

Its flaky texture and moist flesh make it an excellent choice for marinades and salads. You can also use lemon juice and olive oil in most recipes. The best way to cook it is to cook it in its natural state.

The grouper is a fish that belongs to the sea bass family. Its mild flavor makes it an excellent choice for a healthy meal. Its delicate flesh can be paired well with tomato, cucumber, and basil salad. Whether you’re cooking it at home or at a restaurant, it’s best to keep it marinated for as long as possible to ensure the best flavor.

Is Grouper Safe to Eat Raw?

Sushi chefs in the United States rarely use grouper in their creations. Many of the types of grouper that can be used for sushi are parasite-infested.

Parasites are usually killed and rendered harmless during the cooking process, but uncooked parasite-infested fish can make you sick.
The scamp variety of grouper, on the other hand, is safe to eat raw. Sushi is made with its delicate, silky texture.

Grouper fishing is both enjoyable and challenging. It’s delicious and good for you if you eat it in moderation and look for grouper varieties that haven’t been overfished.

While you won’t be eating it in sushi, you’ll be able to enjoy grouper at your dinner table for years to come if you take a few precautions.

Is it Safe to Eat Grouper?

The possibility of elevated mercury levels in grouper must be considered, as with many other fish. Adults should eat grouper no more than twice a month, while children should eat it once a month.

However, if you decide to eat it, you can rest assured that you are making a healthy choice. A four-ounce serving contains only 100 calories and 22 grams of high-quality protein.

Although grouper is not the most fishy-tasting fish, it is still delicious.  Like halibut and bass, it has a mild flavor similar to crab. It can also be dangerous to eat because it contains high levels of mercury. For this reason, it is essential to consult with a health care professional before eating grouper.

When is the Best Time to go Grouper Fishing?

In the southern reaches of their range, such as Florida, grouper fishing is best from October to December, but grouper can be caught all year in most places, and in the northern areas, summer can be a great time to catch them.

If you’re planning a trip to go grouper fishing, get in touch with local fishing guides in the areas you’ll be visiting to find out when the bite will be the best to have the best fishing conditions possible while you’re there. 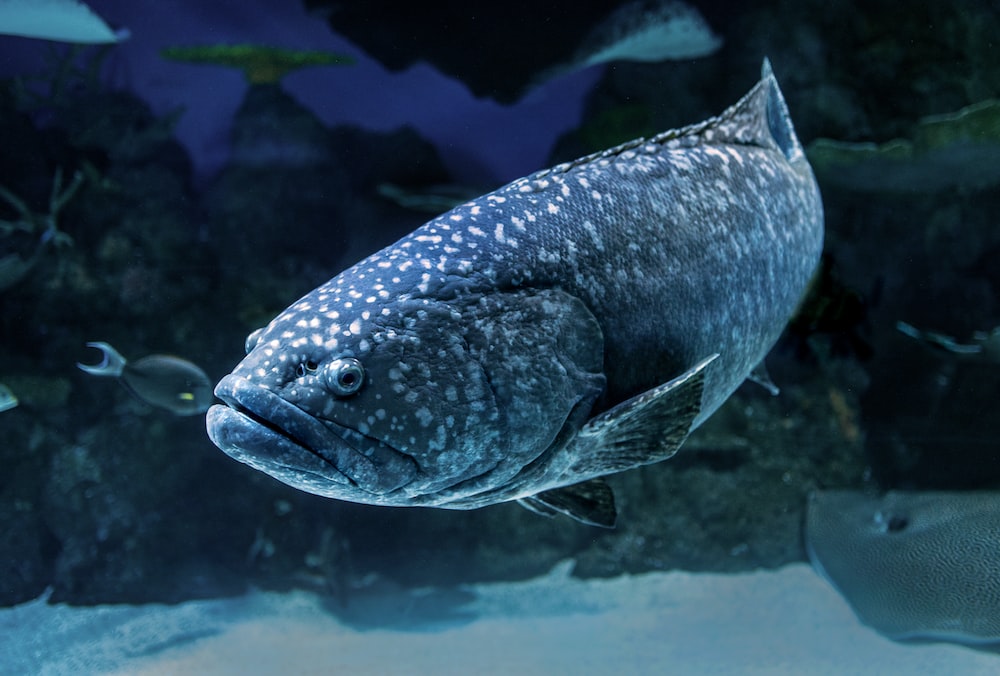 What is the Best Way to Choose the Freshest Grouper?

Nothing compares to the taste of fresh fish. Consider purchasing frozen grouper if you don’t have a reliable source for fresh grouper. You’ll know it was frozen when it was fresh this way. You can also store it in the freezer until ready to eat.

If you’re at a market where the fish hasn’t been pre-packaged, sniffing is a good option. The aroma of a fresh grouper should be minimal to non-existent and leave it to someone else if you smell something fishy.

Check if the fish is still alive and if its eyes haven’t glazed over or darkened. Give it a poke to make a dent in the flesh if you can do a touch test. It should revert to its original form. Avoid fish that has liquid or signs of ice on it if it’s packaged.

Grouper has a mild taste and is often the least fishy of all the common types of fish. The meat is moist and flaky and tastes similar to halibut or bass, though its high oil content makes it different. It has a slightly salty flavor and is more moister than other types of fish. You should avoid grouper if you’re pregnant or breastfeeding. It may have elevated mercury levels, limiting its consumption to two times per month for adults. A four-ounce serving contains 100 calories and 22 grams of healthy protein.

It’s not dangerous to eat grouper. In general, it’s considered a safe fish to eat, though you’ll need to make sure that you are getting a fresh one. It’s safe to eat in small amounts, as the fish can be overfished. There are three main types of grouper – white, black, and gag, and you can substitute a different variety if you’re unsure about its taste.