Gravy is a common word in the culinary lingua. If you do a lot of cooking, it would be a mighty surprise to say that you haven’t had to make one yourself. Gravy is a sauce made from animal drippings, and Drippings refer to the fat juices that we often see dripping off meat when we roast them. Across countries and cultures, gravy may be prepared based on preference by adding certain stocks, cornflour, herbs, or spices.

Au jus gravy is just a French kind of gravy mix. “au jus” is French for juices. Unlike brown gravy, which is the traditional gravy used in several parts of the United States, au jus is made solely from juices extracted from thoroughly boiled meat without thickening agents. The result is a thin broth.

Au jus gravy mix is made entirely from meat juices and herbs or spices. Brown Gravy, the more familiar gravy, can be made from vegetable stocks. The idea of making Au jus gravy mix is in serving the meat dish in its liquids; this makes for a more wholesome and delicious meal. Substitutes for such a sauce as au jus will require that you do not compromise the rich flavor of your meal. We will be discussing all the various ways to achieve that in this article.

What is Au Jus Gravy mix?

If you wish to buy a commercial product that sells Au jus in packets, they are typically sold as an Au jus gravy mix. This already mixed au jus to which herbs and spices have been added makes it easy to be used in cooking. However, some claim-making Au jus yourself is way better. For example, many American dishes employ au jus gravy as a light dipping sauce for many recipes like french dip sandwiches. Traditional French meals use Au jus as a flavoring agent, especially in beef, lamb, or chicken dishes.

The primary ingredient for making Au jus is beef drippings; beef broth or wine (red or Worcester wines ) are also used to prepare this rich, delicious sauce. Unlike the popular brown gravy, no thickeners like corn starch are used in preparing au jus gravy mix. The extra fat is skimmed off the neat and mixed with the meat juices in preparation.

How is Au Jus Gravy Mix Used in Recipes?

Very many beef stocks used to make sauces for serving beef, chicken, or lamb contain MSG. So if you’re looking to give your meat that tasty and creamy feel, then certainly you’ll be going for au jus gravy. It’s also not unusual to serve this gravy in noodles, and it can also be used as a french dipping for meals.

The great thing about au jus gravy is that it can be frozen into cubes and used later, making it easy to store. A lot of delicious recipes can be made using this amazing gravy. Here are a few:

Besides acting as a flavor enhancer, au jus gravy mix also serves as a moisturizer that gives your meat the right feel and texture. Let’s explore some of the substitutes and where they work best:

If you’re making a meat dish of roasted meat or grilled steak, the beef broth certainly works just as great as an au jus gravy mix. Preparing a beef broth involves getting some beef bones, which you brown, then season with salt and pepper. Now chop some onions, celery, and carrots into the mix. Add water, let it cook for about 50 minutes, after which you sieve mix. Remove the liquid and throw the ingredients away.

There you have it, your beef broth that can be used to replace au jus gravy in serving your roasted or grilled meat dish. 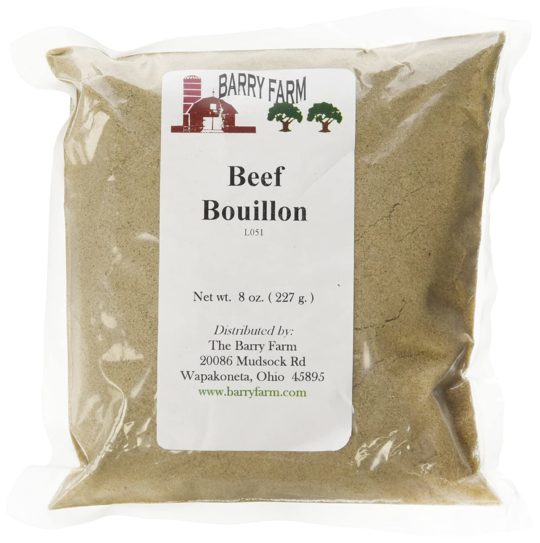 This is one very common that almost anyone can get easily. Its use is in its convenience and how you almost cannot tell the difference. However, it makes for a thicker sauce as it uses corn starch as a thickening agent.

Add the measured quantity of this mixture to a bowl and add water. Boil the mixture till it’s thick and ready to be served.

What’s the difference between brown gravy and au jus gravy?

The major difference between the two is thickeners like flour or cornstarch, common in brown gravy. On the other hand, Au jus gravy is simply meat juices reduced and added with spices without thickeners. One last difference is the thickness of the sauce due to the addition of a thickener which makes brown gravy thicker and darker than au jus gravy.

Can I substitute brown gravy for au jus gravy mix?

Certainly, although the flavor may differ, an ounce of brown gravy for the au jus gravy mix should do just fine.

Everyone loves meat or meat-based meals, and if you like to have a divine, creamy, and we’ll make a roast, then your recipe would probably demand au jus. Imagine the disappointment when you can’t get one made right away because of the slow and almost tiring effort. All that can change when you try any of the above substitutes, which gives you the pleasure of taste and convenience.