Regardless of your age, you’ve probably wondered, “what does a macaron taste like?” Macarons are a delicate and famous French pastry with a sweet taste. Whether you’ve never tried one or you’re a veteran Mac Taster, our article will give you an idea of what they taste like. Then you can start experimenting with your own recipes! Below are some tips for making the perfect macaron.

The macaron’s flavor can vary from sweet to savory. The original almond flavor has a delicate almond balanced by a creamy filling. Passionfruit-flavored macarons are light and refreshing, and the combination of fruit and cream is the ultimate summer treat. Finally, if you’re looking for a tart, the lemon macaron is for you, and its tartness balances out the sweetness and makes for an incredibly delicious treat.

What Is A Macaron?

A macaron is a sandwich cookie made of almond flour, egg whites, confectioners’ sugar, and food coloring formed with a meringue base. Buttercream, ganache, and fruit-based jam are common fillings.

Smooth tops, ruffled edges (called the “crown,” “foot,” or “pied”), and flat bottoms distinguish the meringues. They’re airy, moist, a little cakey, and chewy texture. Macarons that have been adequately baked should have a characteristic melt-in-your-mouth texture.

The best macaron will have a sweet taste that is sweet and mellow. The most common macaron flavors include almond, vanilla, and pistachio. While almond is the most traditional flavor, you can find different flavors by trying various varieties. Try to find one that combines a flavor that suits you best.

The delicate nuttiness that comes from almond flour adds to the flavor of a macaron. A macaron’s primary flavor is sweet and slightly nutty, but it’s the additional flavors that make macarons so intriguing. You can choose from a wide variety of flavors, such as salted caramel or chocolate, as well as pistachios and fruit.

The flavor added to a macaron is the most crucial aspect of how it tastes, but it must be harmonized with the sweetness of the macaron.

Why Are Macarons So Expensive?

Macarons have become a status symbol in the dessert world, admired as much for their aesthetics as for their exquisite range of tastes and inconceivable texture. These delicacies will set you back quite a bit of money.
Macarons require a lot of attention.
The appropriate tools, materials, experience, and know-how are all required, not to mention the time it takes to bake a flawless batch!

But that isn’t the only reason why these delicatessens are flying off the shelves. Macarons have been gaining popularity as a culinary trend for hundreds of years. However, we’re only a decade away from adequately understanding them in the United States, like bakeries, cafes, and adorable dessert stores pop up to meet our rising need for the trendy confection.

Are Macarons A Healthy Snack?

These small, delectable nibbles offer certain health benefits for humans.
Due to the mixture of almonds, sugar, and egg whites. Because Coconut Macaroon is made of coconut, it increases energy and endurance, which improves physical and athletic performance.

How Are Macarons Prepared?

The “French” approach and the “Italian” method are the two basic methods for producing macarons. The method of making the meringue differs between the two.

Egg whites are whisked until stiff-peaked meringue develops in the French manner. Sifted ground almonds and powdered sugar are gradually incorporated until the proper consistency is achieved. Manage is the term for the process of knocking out air and folding.

The Italian method requires whisking egg whites with heated sugar syrup to make a meringue. Sifted almonds and icing sugar are combined with raw egg whites to make a paste. The macaron mixture is made by combining the meringue with almond paste. This approach is more structurally sound, but it is much sweeter, and it necessitates the use of a candy thermometer for the sugar syrup.

Ground almonds can be mixed with either Italian or French meringue.

A macaron is produced by blending finely ground almonds and icing sugar in a fine mixture.

Egg whites are whipped to a meringue-like consistency in a separate bowl.

The two components are then folded together until they have the consistency of “shaving foam,” piped and baked with a skin.

A filler is sometimes used.

Is It True That Macarons Are Gluten-Free?

The caveat is that some macaron varieties may include gluten, depending on what extra ingredients are added to the cookies or buttercream.

For instance, I’ve seen a gluten-free mores-tasting meringue – till the cookie with buttercream flowing out the edges were rolled in graham cracker crumbs. This resulted in the cookie containing gluten, making it unsuitable for gluten-free diets.

Be careful of the various flavors and substances used in the dish to introduce gluten.

Is It True That Macarons Are Dairy-Free?

Macarons do not contain any dairy, and dairy is introduced to a macaron in butter and milk from the buttercream.

Instead of using real butter and milk, you could prepare a dairy-free filling if you prepare your own macarons at home.

Macarons are not vegan because the filling, sandwiched between two meringue shells, contains dairy. The meringue cookies also have egg whites in them.

I’ve seen (and even attempted!) vegan macaron recipes online that use aquafaba, the frothy liquid from chickpeas in a can. I’ve attempted to make these at least three times, and each time has failed miserably. The insides of the shells erupted out the sides and were almost wholly burnt on the bottoms. 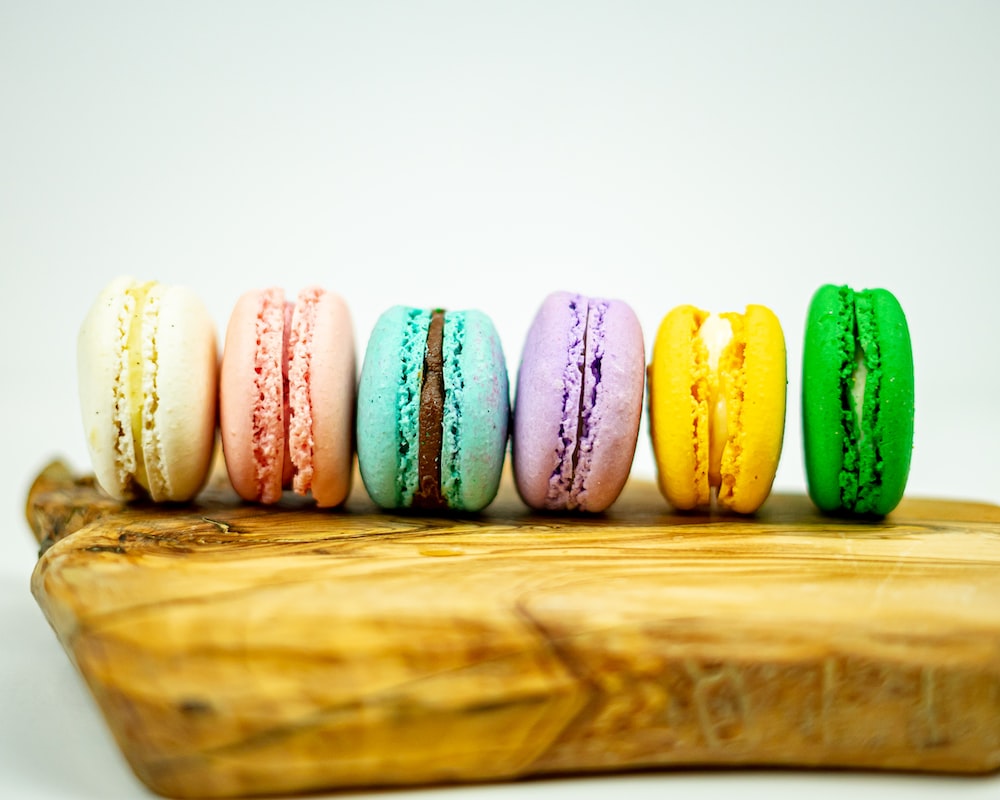 How Can We Store Macarons?

Macarons can be preserved in various ways to maintain their particular texture and remain as crisp and soft as they were when first made. The easiest method to keep your macarons fresh is to store them in the fridge.
Macarons keep for seven days at room temperature and up to seven weeks in the refrigerator, so they have a long shelf life.

If you wonder what a macaron tastes like, start comparing the texture. The consistency should be light and airy, without any visible lumps. The inside of a macaron should not be wet or sticky, and it should be soft and a little uncooked. The sugary flavor of a macaron should be subtle but still noticeable. If it’s too sweet, it isn’t worth eating.

Typically, macarons are made of two shells with a filling. These shells are filled with buttercream or jelly, and the filling is the source of the flavor and moisture of a macaron. Although the two are similar, they’re not the same. While they both are made of egg whites and almonds, macarons are rich and moist. You should also know that the filling is not like a macaroon.