How does the wahoo compare in terms of its flavor in seafood? Even though most people don’t have a strong opinion about the flavor of the fish, many people enjoy eating it. The meat of wahoo is firm, has a lovely white hue, and has a slightly sweet flavor. The flesh comprises a moderate amount of saturated fat and is packed with various nutrients. The months of May through September are prime months for eating wahoos. The mercury content ranges from mild to high, and while the mercury in large enough doses can be harmful, the presence of mercury in food is not a problem in and of itself.

Wahoo is a common species of fish that offers a variety of advantages to one’s health. Wahoo is a fantastic option for virtually any dish because it is very lean. It is also possible to poach, bake, or prepare it in a curry-style on the grill. It has a moderate flavor that goes well with various other ingredients. Additionally, it is rich in omega-3 fatty acids and vitamins, including niacin and vitamin B6.

The waters near Hawaii are home to a large population of these exciting game fish, but it is known that they may also be found swimming in other ocean waters throughout North and South America.

Wahoo fishing is popular among sport anglers because they may catch wahoo with light tackle, unlike most game fish. This is a feature that is not found in many other game species.

They have the potential to reach a length of up to eight feet and a weight of up to one hundred pounds; however, the current world record stands at 158 pounds. On the other hand, their typical weight ranges from eight to thirty pounds.

Wahoo is known for its agility and speed. Although this sport fish is difficult to capture, each catch is satisfying. It’s a close cousin to the kingfish. Although kingfish is a more common ingredient in meals and recipes, wahoo does not disappoint in the kitchen.

Wahoo has a higher abundance in the ocean than swordfish and grouper.  can sustain it since it grows and reproduces swiftly.

Because it belongs to the same family as mackerel and tuna, this fish appears to be mackerel at first glance. Because of their speed in the water, the wahoo is prized by sports anglers. They aren’t known for their speed in subtropical areas like Hawaii and the Caribbean, and they are a well-known local delicacy. In Hawaiian, this fish is known as Ono, which means “excellent to eat.”

What is the flavor of wahoo? While most mackerel fish are oily and have a gamey flavor, the wahoo is sweet and mild in flavor, with a solid but delicate and flaky texture. Wahoo’s flavor has been compared to veal or chicken by several individuals, and it has such a mild flavor that it’s difficult to discern between smoked wahoo and smoked turkey.

Many people who dislike the taste and texture of shellfish have discovered that they prefer this sports fish. Wahoo has a delicious flavor and is nutritious, but it includes a lot of mercury.

Unlike other quick fish and mackerel family members, Wahoo fish has no gamey flavor and is not oily. Instead, the meat is delicate and flaky, with a moderate flavor.

When grilled, the flavor of this fish has been compared to veal or chicken. Smoked wahoo is frequently compared to smoked turkey, and even those who claim they don’t like fish find themselves liking wahoo in any form.

Is Wahoo a Healthy Fish to Eat?

In Hawaiian, wahoos fish are named one for a reason. “Ono” means “excellent to eat,” which aptly describes a wahoo.

Because these fish are relatively lean, they can be grilled, baked, broiled, poached, sauteed, and blackened.

Wahoos are naturally low in saturated fat and contain nutrients such as niacin, vitamin B6, and vitamin B12. You’ll also get a lot of omega-3 fatty acids.

Wahoo is delicious seafood and may prepare in a variety of ways. It’s a terrific fish to grill because of its meaty texture, but it also tastes excellent baked or broiled. The most important thing to remember when cooking is never to overcook it simply because it’s lean meat. The best option is to remove the fish from the oven or grill and cover them to finish cooking.

In a medium pan, melt the butter and saute the onions until they are translucent. Turn off the heat and add the dill. Season the wahoo steaks with salt and pepper, then place them in the pan with the marinade and spoon some on top, or place them in a resealable bag with the marinade and set aside for 20 minutes. Meanwhile, lubricate the grill and set it to medium-low heat. When it’s time to grill, reduce the heat to low and sear each side for about 2-3 minutes before serving.

Serve with grilled vegetables and a salad for a nutritious and full supper.

This dish can be prepared on the stovetop, in the same pan as the marinade, or in the oven. Fish is a versatile cuisine that cooks quickly, making it the perfect weekday dinner on hectic days.

Wahoo is Used in a Variety of Dishes

Raw Wahoo is delicious, and it is highly cherished in the preparations of sashimi and sushi. Because some sections of the fish might be chewy when still fresh, consuming it in its raw form is preferable. If you are going to consume raw wahoo, the best time to do so is while it is still in its new state. Wahoo has a flavor that is easy to get used to, so it is an excellent fish, whether you are trying sushi or sashimi for the first time.

Wahoos can be prepared in a variety of ways. Still, the secret to ensuring that it tastes as wonderful as possible is to avoid cooking it for an excessively long period. Wahoo is an excellent choice for cooking on the barbecue due to its meaty consistency. Wahoo can also be prepared by baking or broiling it. To prevent it from becoming overcooked during the cooking process, you need to check on it. Wahoo is a lean fish, and its flesh can quickly become overdone because of this. 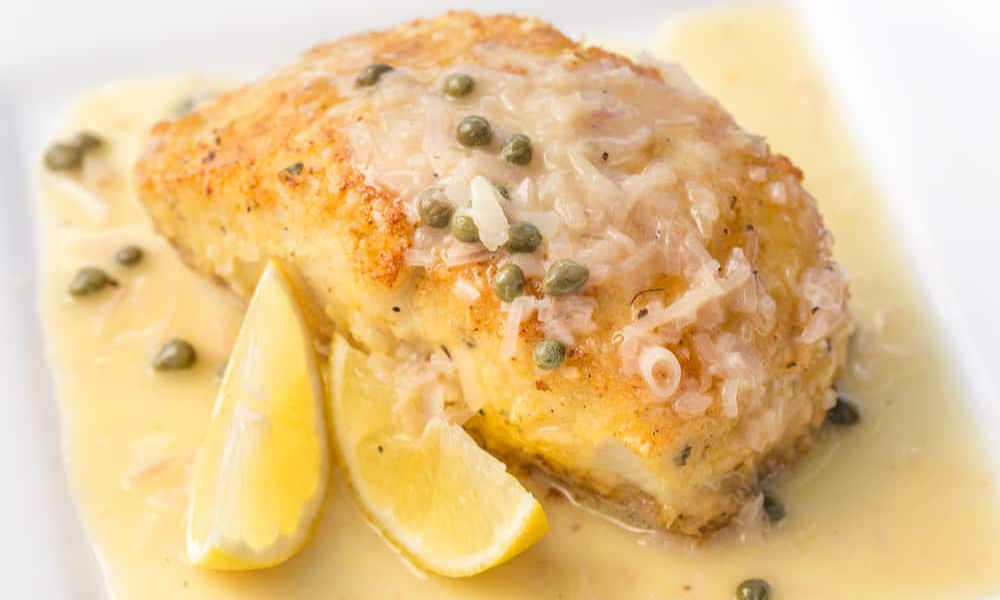 Where did the Word “Wahoo” Come from?

The wahoo is a member of the family Scombridae and is found naturally in subtropical locations such as Hawaii and the Caribbean. Wahoo looks a lot like mackerel, and it has a bluish-green tint on the upper half of its body, which transitions into a silvery tone on the sides and bottom. It possesses a long body covered in tiny scales all along its length.

Wahoo fish can weigh up to 180 pounds and reach a length of eight feet throughout their lifetime. The largest specimen that. Brought in weighed only 158 pounds. Because of the fast pace at which it reproduces, the wahoo is a fantastic choice to attempt if you are interested in game fish. It is continuously replaced in the oceans at the same rate harvested from them.

If you are interested in catching wahoo, it is recommended that you fish in waters that are subtropical in temperature. When the water temperature rises, the wahoo will go to the more northern parts of the ocean, where the water is still chilly.

The depth range of around 90 to 350 feet below the surface is the optimal hunting ground for wahoo. The presence of ocean wedges, wrecks, or bottom foundations in an area increases the likelihood of finding one. If you are unable to catch one on your own, you can inquire about them at the local fisheries located in the coastal areas that are home to wahoo.

Which Fish has the Best Flavor, and Why?

If you develop a list, cod will most likely be at or near the top of it. It has a not overpowering flavor, and some describe it as having a milky aftertaste. In addition to sole, halibut, sea bass, salmon, trout, mahi-mahi, and wahoo are included in the list of fish with the best flavor. How they are prepared is the primary factor in determining this.

Is there a Fishy Aftertaste to the Wahoo Fish?

Wahoo has a flavor that is not overpowering and a firm and lean texture. It also has vast, round flakes. The flavor of grilled wahoo is similar to that of chicken or veal. Cooking Tips: Wahoo is a versatile fish, but to prevent the meat from drying out while being prepared, it is best to cook it using techniques designed for species with low-fat content.

Is a Wahoo a Barracuda?

The wahoo is a kind of mackerel that is found in the open ocean and is known for its big size and voracious appetite. This species is larger than any other non-tuna member of the mackerel family, reaching lengths of up to seven feet (about two metres) in length and weighing at least 180 pounds (82 kilogram mes).

Wahoo is a delicious fish and may prepare in a wide range of different ways for dining. Because it has a meaty consistency, it is the ideal fish for grilling, but it also tastes fantastic when baked or broiled. Never overcook it, which may be easy because it is lean meat, and this is the most crucial thing to keep in mind regardless of how it is prepared.

The flavor of this fish, when grilled, is said to be similar to that of veal or chicken. The flavor of smoked wahoo has been compared to that of smoked turkey, and despite the fact that some individuals claim they don’t like fish, they nonetheless discover that they prefer wahoo in a variety of different preparations. In addition to that, it is also sometimes included in dishes like tacos, stews, and soups.

Wahoo has a flavor that is easy to enjoy and is not overpowering. When it comes to people just starting with sushi, this is a fantastic option. It has a texture that lends itself well to chunking, and it may be grilled to a soft consistency if done correctly. Wahoo is an excellent choice for those individuals who are apprehensive about trying new fish because of its mild flavor. Wahoo may be prepared superbly as sushi and as sashimi and works wonderfully on the grill.

Wahoo can be prepared by cooking and eating it raw; however, its flavor diminishes and takes on a more fishy flavor as time passes. Away that has been correctly prepared is an excellent choice for beginners. When cooked, it retains more of its natural flavor while becoming much softer than when it is raw. A meal that includes raw fish would benefit from having this dish as an option if you’re just getting started with cooking; it is a fantastic option for supper.