Healthy substitute for beef bouillon cubes significance of broth in enriching recipes has been recognized for centuries. And because it’s one of the most popular types of meat, beef is the most typical ingredient for making bouillon. We’ve gotten so used to it, we barely imaging anything else that could be better. Plus, it’s also as advantageous as it is famous, and makes things much easier for our numerous dishes.

These factors, therefore, can make it difficult to consider taking it off the recipe list. You’ve run out of beef broth for some reason, and what you’ve got in the fridge is chicken broth. What do you do? While many come to terms with swapping one for another, others may frown at the thought.

Plus, picking chicken broth over beef broth comes with other questions. Would it be a nutritional equal, or does it fit into your collagen need orketo diet? These and many other queries may cause you to take a step back from such a choice. So, let’s quell the doubts by exploring the comparisons between been and chicken bouillon.

As the name implies, beef broth is made from simmering any beef cut with herbs and vegetables in water. And most times, the bones are also added, so the flavor is richer. Its recipe is also easy to make, meaning you can prepare some at home. But many prefer to buy the boxed or canned versions from stores.

Whichever you use, though, beef broth is an exciting ingredient to add to dishes. Many consume it as a standalone diet for numerous reasons, but that’s not its only use. Beef broth is a densely flavored ingredient that adds umami to tons of recipes. As such, you’ll find it in dishes such as;

Because both broths are made from cooking meat and bones of the animal, it’s normal to assume they’re the same thing. Somehow, they are, since they look alike and contain similar compositions having come from meat sources. But their significant difference is that chicken meat and bones are cooked to produce chicken broth.

From this contrast, other distinctions between the two ingredients can also be noted. And from them, we can make a side-by-side comparison between beef and chicken broth.

Beef broth is renowned for having a deeper flavor compared to chicken broth. And the reason is simple; most times, the bone is roasted before cooking to make the broth. As such, many who’re more privy to consuming beef broth may miss its heartiness when they use the lighter chicken broth.

While beef broth wins in flavor depth, this factor surfaces in recipes it’s added. But it’s different with chicken broth, as you’ll get a rich flavor in your cooking without necessarily getting the taste of chicken all over it. As such, chicken broth works on a broader range of recipes for infusing richness without overwhelming the flavor. It’s why you’ll find it in not only soups but smoothies, oatmeal, and other dishes that need a water base. But the beef broth is mainly employed when you crave that beefy taste.

Both broths trump each other in different nutritional aspects. Beef broth for one beats chicken broth in mineral ratio and collagen. It also offers more protection for gut health, plus its glycine content boosts mood and relaxation. You’ll also find that beef broth is lower in sodium than chicken broth. And it’s your best bet if you’re watching your omega-6 intake since it has less compared to chicken broth.

Most people find chicken broth easier to digest than beef broth. It’s also faster to make, as the bones are less dense. That means while typical beef broth needs about 24 hours to release its richness fully, chicken broth will be ready in about 12-16 hours. And because it’s easier to find chicken parts than beef, quickly whipping an entire saucepan of homemade chicken broth is possible.

While they offer different perks and drawbacks, you can still use chicken broth if you’re out of the beef broth. Of course, you’ll notice a difference in flavor intensity, but the replacement will still work the same in your recipes. Of course, remember that chicken broth contains more sodium, so reduce or omit your salt addition in the recipe. Regardless, adding equal parts of chicken broth will substitute beef broth in soups, sauces, stews, and many other dishes. It’ll also make a tremendous non-beefy replacement in breakfast oatmeal and smoothies.

Other Substitute Options for Beef Broth

What about when you don’t have chicken broth to replace beef broth? Well, you can still pick from this list of alternatives; 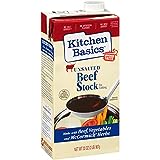 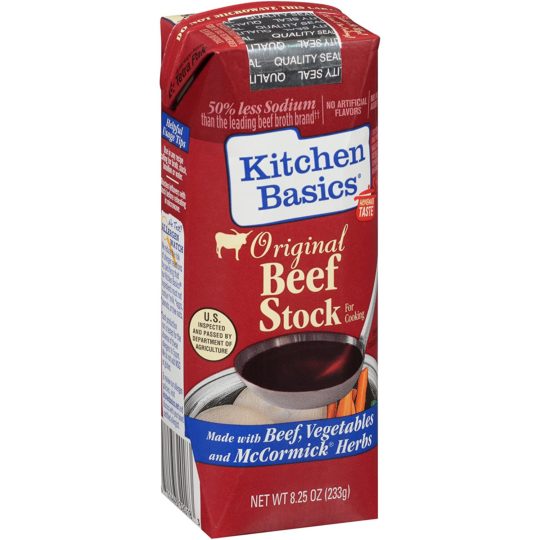 While beef broth comprises meat and bones, the stock is made from only bones. But you’ll still get the expected flavor and richness, making it a handy replacement. And though the beef stock is thinner and less salty, it’ll still supply that needed beefy taste in recipes that call for beef broth. 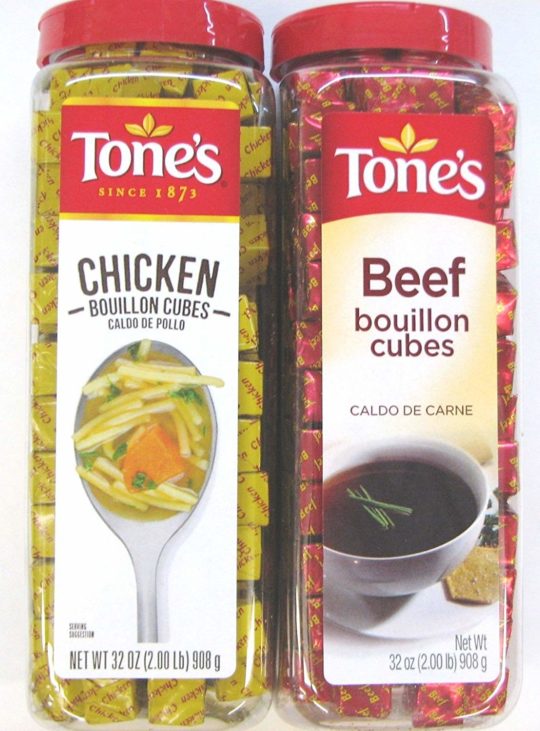 You can also pick a pack of bouillon cubes as a substitute for beef broth. But while it also comes in varieties of chicken, vegetable, or fish, the beef option is your best bet for a similar flavor. Bouillon cubes are primarily dehydrated beef broth combined with other ingredients like fat, vegetables, seasonings, and additives. And once dissolved in warm water, the substitute will add a somewhat close flavor to the beef broth in all recipes. 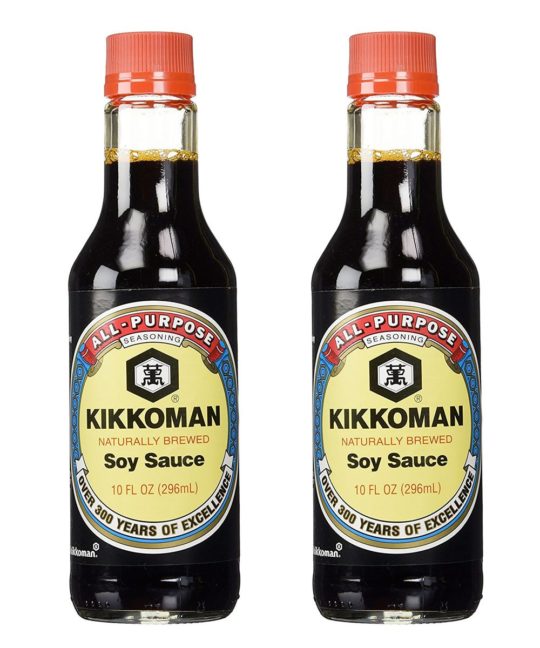 If you’re vegan but wish to add a beefy umami flavor to your recipes, consider soy sauce. Its salty taste blends with a deep flavor that reminds you of beef broth. You can also use equal parts of it as a replacement in all dishes. To replace beef broth, combine one tablespoon of soy sauce with a cup of water and add it to your cooking. Also, adding a bit of spice and herbs like garlic, parsley, and bay leaves can further increase the flavor depth. 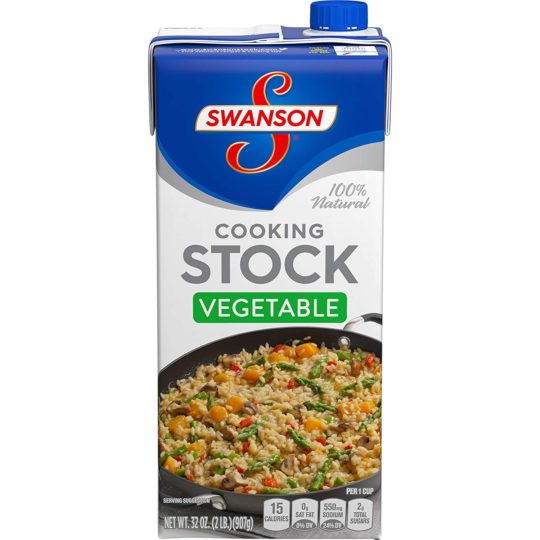 Another handy vegan substitute for beef broth is using vegetable stock. And its rich combination of herbs and spices gives it a full flavor that can lift a dish just as beef broth. Most vegetable stock varieties cook mushrooms, onions, carrots, celery, garlic, and potatoes. It won’t be as thick but will still impart a solid savor for your cooking, so use it in equal amounts.

Can I use chicken broth instead of beef broth in chili?

Yes, you can. But note that chicken broth isn’t as robust-flavored as beef broth. Still, you can tweak it by adding a bit of umami seasoning to it before using it.

How much beef broth is in a bouillon cube?

By standard measurements, one bouillon cube contains enough material to make one cup of beef broth. And the same applies to the chicken broth as well.

What can I replace the beef broth with?

While chicken broth makes an excellent one-to-one ratio substitute, the other options listed above also work. But you can also consider mushroom broth, liquid aminos, wine, and beer as handy alternatives.

Switching beef broth with chicken broth may seem tricky, especially when you’re considerate about their distinctions. But bot ingredients share numerous similarities and behave the same in most recipes. So, it’s completely alright to use chicken broth in place of beef broth for your cooking. In the end, a rich and flavorful dish will be the final result.