Not all chiles are equal, and their differences are prevalent in texture, color, flavor, and heat. And with Serrano chiles, these features are displayed in an intricate yet unique manner. These fruits are tasty and versatile, plus they provide a good deal of heat that’s just right with tons of dishes. And they’re a beloved addition to Mexican cuisine, in which their flavors are almost intertwined.

So, imagine being highly fond of this moderately spicy pepper, only to not have any for your salsa. Yes, it can put a cloud over your ray of sunshine, but not to worry. Other pepper varieties are available you can use, and what’s more, they’re closely similar to Serrano chiles. But before we compare their features, let’s explore the world of Serrano chiles for a bit. What are they? Where are they from? And why do we enjoy them so much in our Carne con chile?

What are Serrano Chiles?

Serrano chiles are a type of Mexican pepper whose name was derived from the Puebla and Hidalgo regions. These areas are mountainous and known as the Sierras, and the term ‘Serrano’ was coined from the word. The peppers are small and mostly eaten green, though they can be left to turn yellow or red upon maturity. And Serrano chiles are meaty, as the flesh is thicker than an average chili pepper and isn’t suitable for drying.

The chiles also come with an impressively high heat capacity. They hit around 8,000 to 23,000 SHU, making them much hotter than jalapeno peppers. Compared to habanero peppers, Serrano may be hotter or not as hot, depending on the type. Regardless, these chiles still need to be handled with gloves as the spiciness can also be felt on the skin.

But Serrano chiles are also tasty, which is why they’re eaten regularly in Mexican cuisines. They’re an integral part of the region’s culture and have been around for decades. And in some areas, the fruits are consumed fresh, even with their super hotness.

Serrano chiles remind you of the flavor of jalapenos, but with a spicier kick to it. Their taste profile can be summarized as fresh and hot, but with enough meatiness.  And sometimes, the peppers are roasted, which adds a smoky, earthy hint to the taste. And this flavor profile doesn’t just work in Mexican dishes but can also be featured in South Asian recipes.

These peppers are a rich source of heat and can spice up any recipe. They’re great for boosting the warmth of vegetable dishes and excel in meats and fish. You’ll also find Serrano chiles as a topping in many foods or for imparting a spicy vegetable flavor to desserts. And if you’ve grown accustomed to eating Mexican foods, then you must remember the meatiness of these chiles in the mix.

Lots of recipes enhance their flavor and heat level with fresh Serrano chiles, and some examples include;

Serrano chile is one ingredient that’s easy to love. But you may not have it readily available in your vicinity. Other times, you may crave the meaty texture of the peppers but also want more heat. And in some cases, many still find Serrano chiles to be extremely spicy.

Luckily, there’s a fix for every situation, and these substitutes will help in whatever problem the lack of Serrano chiles may cause. You’ll find that they’re also convenient options, so no need to go on an adventure to find its replacement.

These chiles are the closest thing you can swap for Serrano on all levels. Jalapenos share the same fresh green color and meaty thickness of the pods. They’re also easy to find and are just as popularly used in Mexican cuisines. With jalapeno peppers, you can substitute Serrano chiles in everything from dips to tacos, quesadillas, enchiladas, salsas, pesto, tostadas, and more. But the hotness is milder in this alternative, at a level of 2,500 to 8,000SHU.

Still, jalapenos make the best bet if you wish to tone down the heat while retaining the bright and meaty flavor and texture. But if you still want more spiciness in the recipe, increase how many jalapeno peppers you’ll use in the dish. 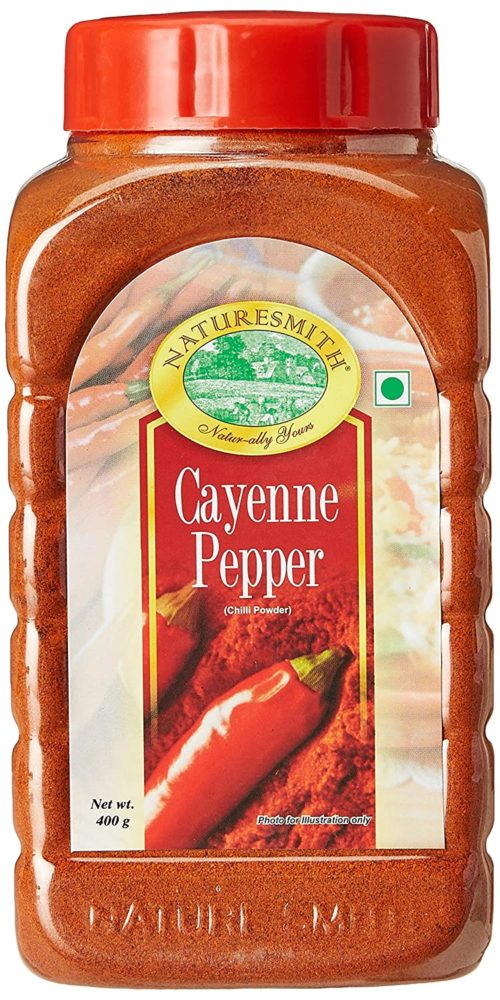 This pepper is a popularly known condiment in many recipes, but mostly in its powdered form. Regardless, it’s an excellent option for imparting similar hotness as Serrano chiles to dishes. It’s somewhat hard to find fresh cayenne peppers, but if you do, use them in equal amounts as Serrano peppers. But you’ll need less of it, as cayenne is spicier with a heat level of 30,000 to 50,000 SHU.

Still, many may enjoy this boost in hotness and use it in equal amounts. And the fresh varieties of this pepper are best if you’re looking to include meatiness and chinks in the dish. But for creating a spicy dish, you can use the powder in a pinch. Cayenne is already popular in Cajun dishes, so it’s an excellent option for salsas and similar recipes. 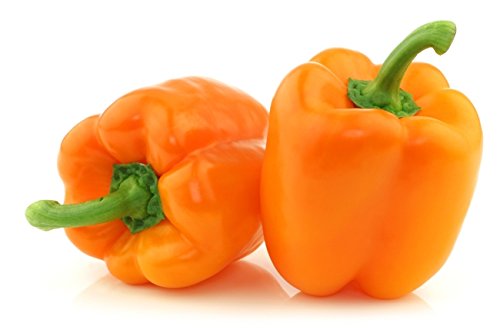 Not everyone likes the spicy nature of Serrano peppers, and if you’re one, your goal may be to enjoy its meaty texture. In such needs, bell peppers make the best equal alternatives. They’re renowned for having little to no heat and a thick flesh that offers a full vegetable flavor. Plus, you can pick any type you like or use the green varieties for a closer hue to Serrano chiles.

You can use smaller bell peppers in stuffed pepper recipes or grind them to make dips. They’ll also work in other dishes that call for Serrano pepper, minus the heat. But if you miss this spiciness, add a pinch or two of red pepper flakes to bring it close to home. 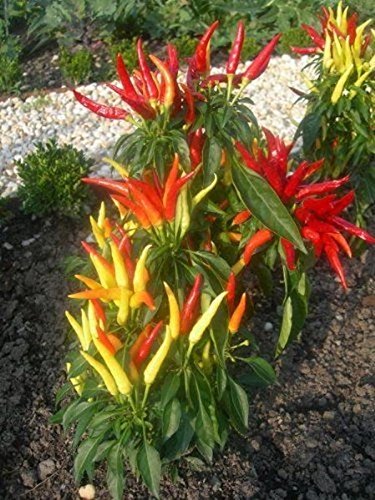 While Anaheim peppers may offer you a similar greenness, they’re milder than Serrano chiles. With a heat level of 500 to 2,000 SHU, what you’ll note is a warm ting compared to the fiery sensation from Serrano peppers. As such, you’ll need more Anaheim peppers in your Serrano recipes to replace the heat. But it also works best if you prefer a milder yet meatier alternative to the Mexican spice.

Anaheim peppers are also easy to find in stores around you. And the taste works in everything from sauces to soups, toppings, pizzas, nachos, burritos, enchiladas, dips, and salsas. 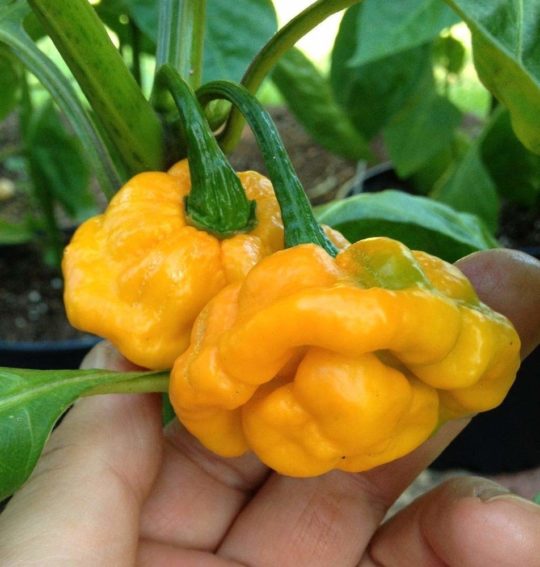 While some may feel Serrano peppers are crazy hot, others may consider it lower than they’d prefer. And for such daredevils, Scotch Bonnet peppers are a fiercer substitute. These fruits aren’t called the Jamaican Hot for no reason. At 100,000 to 350,000SHU, they’re one of the spiciest pepper varieties on the planet.

Scotch Bonnet peppers are slightly meaty, though they’re great for drying. Still, they add texture and fruitiness to many recipes, just like Serrano peppers. They’re also perfect in meats and will work great for spicy meatballs, steaks, stews, pot roasts, and salsas. And you can use this substitute at equal ratios in your dishes, bearing in mind that the result will be much hotter.

Which is hotter, Serrano or habanero?

Habanero peppers are much hotter than Serrano peppers. By statistics and Scoville heat measurements, they’re ten times spicier than Serrano chiles. Habaneros reach about 300,000 to 450,000SHU, while Serannochiles trail far behind at 8000 to 23000 SHU.

Can I substitute Serrano for poblano?

Yes, you can. Poblano peppers offer lower heat at 1,000 to 2,000SHU. But they’re also perfect in all recipes that thrive on Serrano chile’s greenness. And you can use more poblano peppers to match the heat or equal amounts if you prefer milder dishes.

Are red Serranos hotter than green?

Yes, they are. Serrano chiles get hotter the more mature they become, and the red ones are older than green. Red serranos can also be sweeter with less crisp than the green varieties.

Tasty, spicy, and versatile, Serrano chiles are an easily lovable pepper ingredient. But when you can’t have them, try any of these suggested peppers as a substitute. Many will match a similar heat level as this Mexican chile, while others will tone down or boost the amount needed. And whichever you employ, you’ll still wind up with a tasty dish at every try.