If you’ve got an endomorphic body, then you’re quite familiar with how hard it is to lose fat. But it’s not completely hopeless for such a physique as you can employ a metabolic confusion meal plan. This diet schedule combines healthy foods with a systematic calorie variation to enable your body to shed enormous amounts of pounds in a short period. And it allows you to closely track your weight loss progress, enabling you to attain the perfect body size for you.

An endomorph body type is characterized by its large bone structure and wide waistline. And such a structure is prone to storing more fat, especially in the abdominal regions and around the upper arm and thighs. The result is a heavy, curvy frame that’s almost round but notably bulky. And such a body size finds it hard to keep their weight in check, resulting in the chance of them tethering towards obesity.

It’s where this diet plan comes in. The metabolic confusion meal plan works on the theory that while you can eat as much as you want, keeping a preferred level of body weight is also possible. It’s also known as a carb-cycling plan, and it accomplishes this by combining random and unpredictable diet schedules. The objective of the meal plan is to ‘confuse’ your body’s digestive system in such a way that it breaks down food faster, resulting in less chance of depositing fat and carbs.

The diet plan rotates the number of calories you eat daily by offering a day of high-calorie intake followed by another with a lower intake. This means that if you consume around 2000 calories on the first day, it’s then followed by 1000 to 1200 calories on the next day. This process pushes the body to digest the food faster, resulting in lower body weight. And the meal plan combines three daily meals with intermediary snacks and extends for one week but can be modified for 14 days or even a month, under the supervision of a professional dietician.

Benefits of this Diet

The metabolic confusion meal plan is superb for weight loss, as the random consumption of calories encourages faster digestion. And the low-calorie diet on low days pushes the body to use its fat deposits as an energy supply. Therefore, the meal plan has a daily calorific intake, which checks your portion control. And it also encourages eating healthy foods such as whole grains, lean proteins, healthy fats, fruits, and vegetables.

With this diet plan, the body is also pushed to develop more lean muscles, speed metabolism, and push your energy levels. It’s also an exciting way to improve your diet, as it can be adjusted for paleo, vegan, or gluten-free uses. You can also consider it for your keto needs as the meal plan encourages the consumption of more proteins, more fiber, and fewer carbs. This helps the body to dwell less on sugars and digest the proteins faster due to the presence of fiber foods.

This meal plan works great if you combine it with moderate exercises on high-calorie days. And it results in lower blood sugar levels, making it great for those with hypertension and issues triggered by high BMI foods. 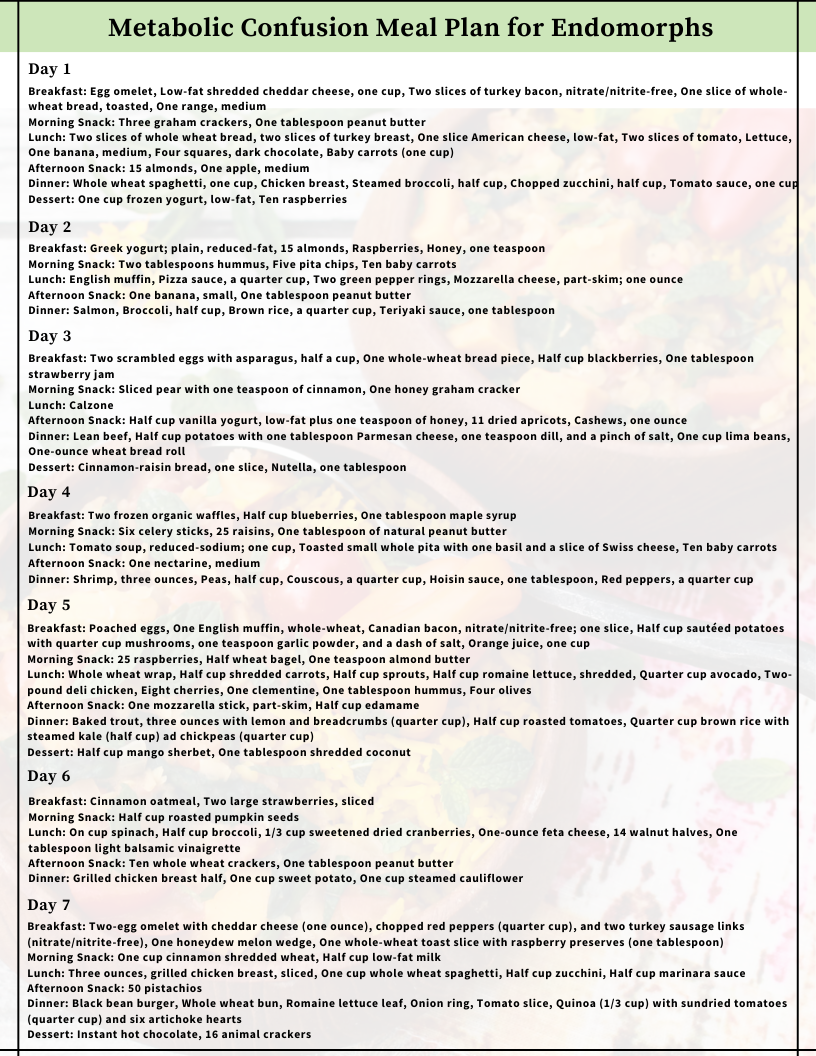 Staying fit can be tough when you’re an endomorph, but it doesn’t make it impossible. An effective eating schedule like this metabolic confusion meal plan aids in reducing excess body weight, pushing your system to speed digestion. And with it, you can groom your body to break down food faster, releasing more energy with fewer carbs and building a better frame.